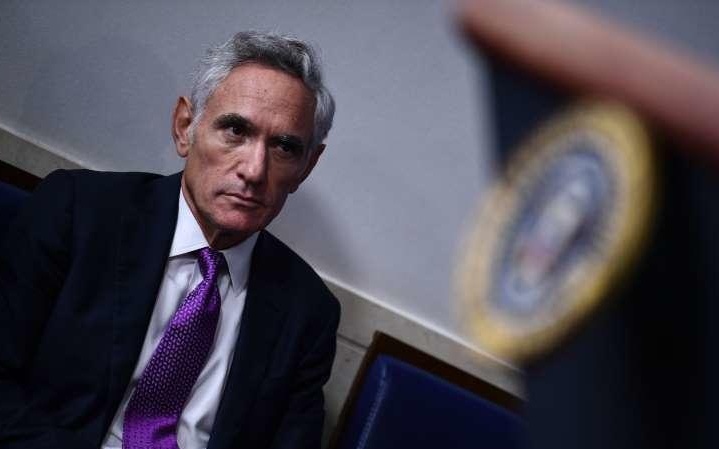 The Coronavirus pandemic surges across the US, but Donald Trump’s team refuses to work with the incoming Biden Administration and calls on Americans to “rise up” against containment measures.

“It is horrific. …Right now our hospitals and ERs are at the breaking point. We are on the edge of what is the worst possible thing for a health care provider, which is to not be able to help.” –ER physician @meganranney describes life in her hospital right now. pic.twitter.com/fJItFLgmbU

But with Trump refusing to accept his loss to President-elect Joe Biden, his staff maintained a ban on any arrangements or briefing with Biden’s personnel — even though the President-elect and incoming Vice President Kamala Harris have named a 13-member Coronavirus Task Force of medical, public health, and technology experts.

The blockade on a transition has prevented any preparations for distribution of a vaccine, following drug company Pfizer’s announcement of clinical trials with 93% effectiveness.

And as Michigan Gov. Gretchen Whitmer joined other State leaders in implementing measures, Trump’s medical confidante Dr. Scott Atlas — a neuroradiologist with no qualifications in epidemiology or virology — tweeted:

The only way this stops is if people rise up. You get what you accept. #FreedomMatters #StepUp https://t.co/8QKBszgKTM

The message of Atlas, who has pushed aside experts such as Dr. Anthony Fauci and White House Coronavirus Task Force coordinator Dr. Deborah Birx, raised concerns about an Administration endorsement of violence to sabotage the measures.

In the spring, Trump encouraged right-wing armed men who charged into the Michigan State Capitol and gathered outside Whitmer’s house with the tweet, “LIBERATE MICHIGAN!”

In early October, the FBI arrested 13 men over a plot to kidnap Whitmer and burn the Capitol building.

But Trump told a campaign rally three weeks later, “We’ll have to see if it’s a problem. Right? People are entitled to say maybe it was a problem, maybe it wasn’t.”

Challenged on social media, Atlas was forced into a clarification on Sunday night: “Hey. I NEVER was talking at all about violence. People vote, people peacefully protest. NEVER would I endorse or incite violence. NEVER!!”[I c

Whitmer responded in a CNN interview to Atlas’s initial tweet:

We know that the White House likes to single us out here in Michigan, me out in particular. I’m not going to be bullied into not following reputable scientists and medical professionals….

[I consult] people that actually have studied and are well respected worldwide on these issues, not the individual that is doing the President’s bidding on this one.

Attorney General Dana Nessel said Atlas’s Twitter message was “disappointing, irresponsible, and the reason why the United States finds itself in such desperate circumstances regarding COVID-19….A patriot is one who protects America from its enemies, both foreign and domestic.”

She added, “I look forward to a new federal administration that works cooperatively with our state government to protect Michigan residents.”

A series of governors, both Republican and Democrat, have ordered the wearing of masks, closures of public spaces, and limits on gatherings as they face overwhelmed medical services.

Kate Brown of Oregon announced a partial lockdown starting Wednesday, halting dining in restaurants, closing gyms, and limiting social gatherings to no more than six people. Doug Bergum of North Dakota, a Republican who had resisted measures for months, reversed course and ordered the wearing of masks and limits on gatherings after the state posted record numbers of daily cases.

J.B. Pritzker of Illinois said he might impose a stay-at-home order: “We’re running out of time and we’re running out of options.” Andrew Cuomo of New York, the initial center of the pandemic, ordered all restaurants, bars, and gyms to close at 10 p.m., and issued a ban on private gatherings with more than 10 people; however, schools will remain open if the positive rate of infections does not exceed 3%.

Utah has a statewide mask mandate, Ohio has imposed them for businesses, New Mexico is banning in-person services for non-essential businesses, and Maryland is scaling back indoor restaurant dining capacity from 75% to 50%.

Whitmer said Sunday that after Republican legislators rejected a mask mandate, “I asked, ‘What is your plan?’, and there wasn’t one other than doing some public service announcements.”

But Michigan’s Senate Majority Leader Mike Shirkey sniped, “We are disappointed that Gov. Whitmer chose to go it alone, again.”