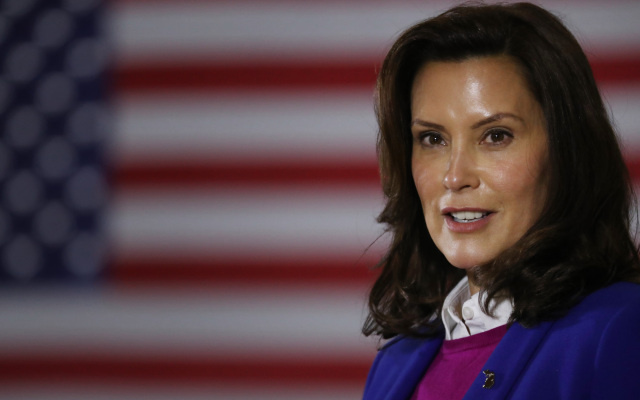 Whitmer was the target of a rightwing plot to kidnap her this autumn. That followed months of Trump agitation against the Democratic Government, calling on Michigan residents to “LIBERATE” themselves from Coronavirus measures.

On April 30, with unmasked demonstrators outside the State Capitol, armed militiamen charged into the building, posed with their weapons, and confronted security personnel.

But Trump only stepped up his insults and calls for action against the steps to contain the pandemic. On Saturday night at a rally in Muskegon, Michigan, he whipped up the crowd in chants of “Lock her up” over Whitmer, shouting, “Lock ’em all up.”

This is exactly the rhetoric that has put me, my family, and other government officials’ lives in danger while we try to save the lives of our fellow Americans. It needs to stop. https://t.co/EWkNQx3Ppx

She followed up in a TV interview on Sunday morning:

It’s incredibly disturbing that the President of the United States, 10 days after a plot to kidnap me, put me on trial and execute me was uncovered, the President is at it again and inspiring and incentivising and inciting this kind of domestic terrorism.

It is wrong. It’s got to end. It is dangerous not just for me and my family, but for public servants everywhere who are doing their jobs and trying to protect their fellow Americans. People of goodwill on both sides of the aisle need to step up and call this out and bring the heat down.

Michigan was hit hard in the initial wave of the pandemic, with the third-highest number of deaths in the US. Containment measures checked the virus through the spring and summer, and the state fell to 10% in the death toll.

But amid the latest surge across America, with the Midwest hardest-hit, cases are rising again. Michigan recorded 1,791 new Covid-19 cases on Saturday, and a record level of more than 10,000 weekly infections.

Trump Daughter-in-Law: He Was Only “Having Fun”

Trailing Democratic candidate Joe Biden in national polls and in most swing states, Trump is fighting for his political future in Michigan.

Trump’s 2016 victory over Hillary Clinton in the state sealed his Electoral College triumph. But he is 8% to 11% behind Biden in recent Michigan polls, and has only an 8% chance of winning the state on November 3.

See Essential Guide to Biden v. Trump: The 13 Swing States That Will Decide the US Presidential Election

Appearing soon before Whitmer on another US TV channel, Trump’s daughter-in-law Lara insisted:

He was having fun at a Trump rally and quite frankly, there are bigger issues than this right now for everyday Americans people….He wasn’t encouraging people to threaten this woman, that’s ridiculous.

Whitmer summarized in her discussion on NBC News’s Meet the Press, “This is the United States of America. We do not tolerate actions like he has given comfort to and that’s why we all have to be in this together.”

Democratic candidate Biden said in his Sunday campaigning in North Carolina, “All President Trump is offering the people of Michigan is more lies and distractions. No plan to get the virus under control, no strategy for pulling our economy out of this recession, no vision for uniting the country.”