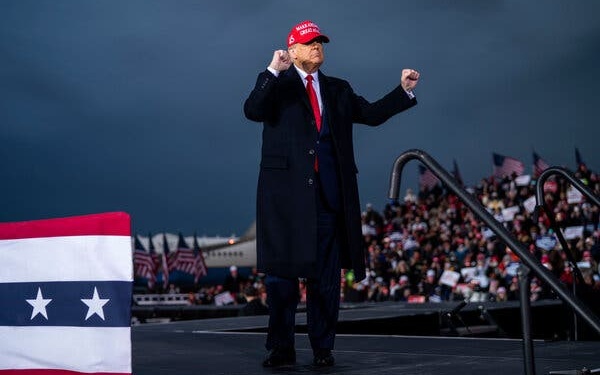 Coronavirus cases in the US are surging, with a rise of about 70,000 daily infections for the first time since July 24.

With cases rising in more than 40 states, 18 plus the island of Guam set weekly records.

In contrast to the first wave of the virus, the surge is mainly in rural areas, particuarly in the Midwest. North Dakota and South Dakota, per capita, are setting national records, and Wisconsin — where Donald Trump held a campaign rally on Saturday — has seven of the 10 US metropolitan with the highest rates.

Dr Anthony Fauci, the Government’s top infectious disease expert, warned Friday, “You can’t enter into the cool months of the fall and the cold months of the winter with a high community infection baseline.”

But Trump has sidelined Fauci since late May and repeatedly insults and belittles the doctor.

On Friday, angered that Fauci had called out the Trump campaign for distorting and misusing his words, Trump lied that the doctor is a Democrat and misrepresented his views on the virus and measures, such as mask wearing, to contain it.

“Trust the Science, Speak the Truth”

In a video statement, Biden noted Wisconsin’s record daily toll, hours before Trump arrived in Janesville for his Saturday rally, “Wisconsin is in the grips of one of the worst coronavirus outbreaks in the country.”

We have lost far too many lives to this pandemic – and the sad fact is, it didn’t have to be this way.

President Trump is knowingly downplaying the severity of the virus. At virtually every turn, he has panicked and tried to wish it away, rather than doing the hard work to get it under control. And today, 150,000 fewer Wisconsin workers are employed than when President Trump took office and his failed response to the pandemic has crushed Wisconsin’s economy.

If you send me to the White House, I’ll be ready to tackle this crisis on day one. My administration will trust the science, lead by example, speak the truth to the American people, and help Wisconsin families and small businesses build back better than before.

At the rally, Trump demanded that Wisconsin lift containment measures despite the surge of the virus. He repeated his mantra that the US is “rounding the corner”.

Following the pattern of Trump’s gathering, the audience was closely packed with many people not wearing masks.

You deserve a president who will actually tell you the truth. pic.twitter.com/I9XzZ0ADmT

Earlier in the day in Muskegon, Michigan, Trump avoided the facts of the pandemic to rail against “extremists”.

He snapped at Rep. Ilhan Omar of Minnesota, one of the first two Muslim women in Congress, “She doesn’t love our country too much.”

Then he called for the imprisonment of Michigan Gov. Gretchen Whitmer, the target of a kidnapping plot by right-wing militiamen amid Trump’s call to “LIBERATE” the state from Coronavirus measures.

Trump joined in a crowd chant of “Lock Her Up.” Then he said, “The schools have to be open, right?”