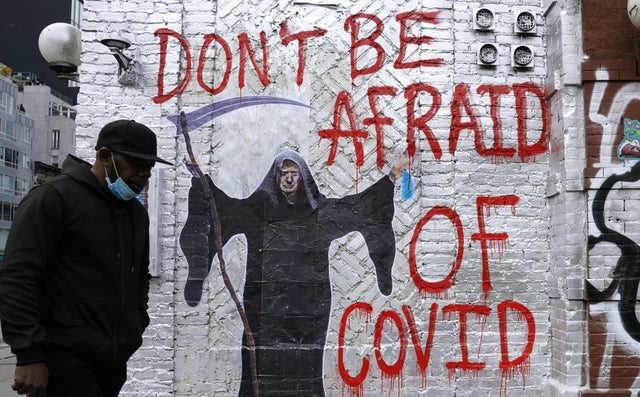 The US sets a daily record for Coronavirus cases, with 84,867 infections on Friday.

The number of people hospitalized has risen 40% in the past month. Medical and public health experts, including the White House’s Dr. Anthony Fauci, are warning of a further surge through the winter if containment measures are not implemented and followed.

But Donald Trump has sidelined the Government’s specialists, calling Fauci a “disaster” and other scientists “idiots”. He is now relying on Dr. Scott Atlas, a neuroradiolist and Fox TV commentator who put out tweets on Thursday and Friday promoting herd immunity and rejecting a track-and-trace system for the virus.

Atlas denounced the experts calling for containment, “USA is at a tipping point. I’m proud to be an outlier when the in-liers are wrong – they’re the new Flat Earthers.”

Meanwhile, Fauci said in a TV interview that it has been “several months” since Trump met with the White House Coronavirus Task Force and “a while” since he had seen Trump.

“I definitely don’t have his ear as much as Scott Atlas right now, that has been a changing situation,” Fauci explained.

Amid a COVID case surge all over the U.S., Dr. Fauci says Trump hasn’t been to a WH COVID task force meeting in several months. pic.twitter.com/CYcx62HQuM

In Thursday night’s second Presidential debate, Democratic nominee Joe Biden called for responsibility and spoke of a “dark winter”. But Trump repeated his mantra of denial: “We’re rounding the corner. It’s going away.”

Contrasting his approach with Trump’s dismissal of experts, the former Vice President assured, “Mr. President, I’ll listen to the scientists, and I’ll empower them.”

He criticized Trump for seeking to dismantle the Affordable Care Act: “Overturning the ACA would mean people have to pay for the Covid-19 vaccine. That’s wrong. Very, very wrong.”

The University of Washington’s Institute for Health Metric and Evaluation, with one of the leading models of the pandemic, has revised its death estimate upwards to 511,373 by February 1.

The scientists said 130,000 lives can be saved if 95% of Americans consistently wear masks, an “relatively affordable and low-impact intervention” with “the potential to serve as a priority life-saving strategy in all US states”.

If containment measures are relaxed, the death toll could be more than 1 million by February 28.

[The study] confirms what many of us are worried about, which is an unrelenting outbreak in the United States….

If we don’t do anything much more we will have a very serious increase in fatalities. Simple policies such as mandated masks can help stop the spread and if you had a strong consistent message from the White House it would be very difficult for governors to not implement that. But the lack of federal leadership has cost lives in America. It’s a very sad state of affairs….

It’s become an ideological position, a symbol of resistance to science that has unfortunately become locked in.

Trump continues to defy those measures with rallies in which attendees are crowded together and few wear masks. He maintained his denial on Friday at a Florida campaign stop:

“We’re not entering a dark winter. We’re entering the final turn and approaching the light at the end of the tunnel” — Trump on Covid just now, hoping that merely repeating the same optimism for eight-plus months can distort reality