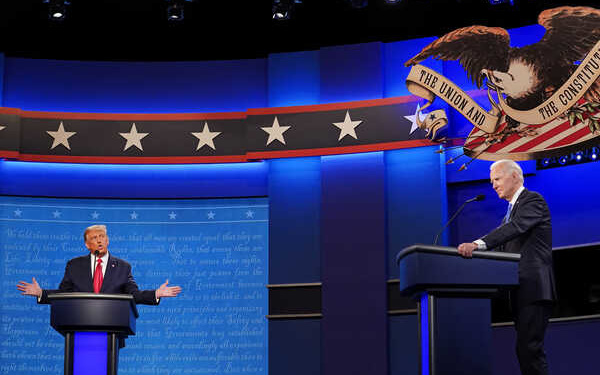 Speaking about racial and social issues raised by Black Lives Matter marches, Joe Biden turns Donald Trump’s claim that he has done more for Black Americans “except maybe Abraham Lincoln” against him.

Abraham Lincoln here is one of the most racist Presidents in modern history.

Biden sarcastically refers to Trump as "Abraham Lincoln," and Trump gets confused by it pic.twitter.com/Ogdt1QXf3g

In the second and final Presidential debate, Democratic candidate Joe Biden calls for effective action over the “dark winter” of Coronavirus and issues such as climate change, immigration, and healthcare, while Donald Trump repeats — as the US death toll nears 225,000 — that the pandemic is “going away”.

After Trump’s hectoring of Biden in the first debate, the encounter was less confrontational because each candidate’s microphone while the other was giving a two-minute answer to the question opening each of the six topics.

That opened up more space for discussion of issues, although Trump again tried to divert the debate with disinformation and unsupported attacks on Biden and his family.

Biden opened by summarizing the situation and Trump’s response:

Trump stuck to his denials both of the general threat and of the current position. He proclaimed that the latest spike in deaths and cases “will soon be gone”. repeated his unsupported declaration that a vaccine is “ready” for distribution: “We’re rounding the turn. We’re rounding the corner. It’s going away.” And he tried to divert any responsibility with insults about Biden “living in his basement” and assailing Democratic governors.

But Biden seized on Trump’s “We’re learning to live with it”:

People are learning to die with it. You folks home will have an empty chair at the kitchen table this morning. That man or wife going to bed tonight and reaching over to try to touch, there out of habit, where their wife or husband was, is gone. Learning to live with it. Come on….You say, “I take no responsibility.”

He called for a coherent response, with social distancing and measures over businesses, bars, and public places to lower the spread of the virus. He set out steps for schools, noting that the Trump Administration has not provided the money to implement them.

Trump did not offer any plan in reply, instead demanding a full reopening and misrepresenting Biden’s position: “He’ll close down the country.”

Biden responded, “Simply not true. We ought to be able to walk and chew gum at the same time.”

He highlighted the failure of the Administration to reach agreement on a stimulus bill this autumn to help struggling states and cities.

I don’t see red states and blue states. What I see is American United States. And folks, every single state out there finds themself in trouble. They’re going to start laying off, whether they’re red or blue, cops, firefighters, first responders, teachers, because they have to balance their budget.

The former Vice President also called for repair of the damage caused by the Trump Administration over immigration, climate change, and healthcare.

Vowing an overhaul of immigration policy, he cited the latest revelation over the Administration’s separation of children from undocumented immigrant parents in 2018, with the Government unable to locate the mothers and fathers of 545 juveniles still in the US.

Their kids were ripped from their arms and separated, and now they cannot find over 500 of the sets of those parents, and those kids are alone. Nowhere to go. Nowhere to go. It’s criminal.

Trump replied, “We’re trying very hard,” falsely claiming, “A lot of these kids come out without the parents.”

And when Biden pointed out that, under the Obama Administration, undocumented immigrants showed up for their court hearings, Trump derided, “Only those with the lowest IQ.”

Immigrants have “low IQ”. What a racist turd. #Debates2020 pic.twitter.com/r4he7UgeoT

After Biden set out his $2 trillion plan over the “existential threat” of climate change, Trump put a stream of falsehoods and bizarre claims. He lied that the construction of renewable-energy facilities created more emissions than fossil fuels. He accused Biden of trying to mandate that buildings be constructed with “little, tiny, small windows”, and he insisted that wind energy is “extremely expensive” and “kills all the birds”.

Biden reinforced his comments on the pandemic with the pledge to expand Obamacare as “Bidencare”, extending coverage and reducing premium and drug prices.

Biden responded, “I think healthcare is not a privilege, it’s a right. Everyone should have the right to have affordable healthcare.”

Joe Biden hits back at Trump's description of Biden's health care plan, comparing him to Bernie Sanders: "He's a very confused guy. He thinks running against somebody else. He's running against Joe Biden. I beat all those other people because I disagreed with them." pic.twitter.com/cSanwH2snO

“You Know Our Reputations”

Trump had hoped to use the debate for baseless claims about Biden and his family, following a suspect story — possibly based on disinformation fed to The New York Post by Trump’s attorney Rudy Giuliani — that the Democratic candidate and his son Hunter made money from Ukrainian entities in return for political favors.

But Biden pre-empted the assault by stating that Trump’s “buddy Rudy Giuliani” was being “used as a Russian pawn”. Trump gaped and jerked his head to the right.

Trump persisted with the unsupported allegation, “The horrible emails of the kind of money that you were raking in, you and your family”, trying to smear Biden with supposed ties to Russia and China.

But Biden easily countered, “I have not taken a penny from any foreign source ever in my life”, an assertion backed up by an investigation by Senate Republicans.

And he then turned to the actual stories of Trump’s failure to pay Federal taxes and the revelations of Trump’s holdings in foreign countries.

We learned that this president paid 50 times the tax in China [that he pays in the US] with a secret bank account with China, does business in China, and [he] is talking about me taking money?

Trump tried to deflect with further insults and a repetition of his empty pledge that he will release his tax returns, withheld throughout his 2016 campaign and term as President, “as soon as the auditors finish”.

Biden challenged, “He’s been saying this for four years, show us, just show us. Stop playing around.”

There’s a reason why he’s bringing up all this malarkey. There’s a reason for it. He doesn’t want to talk about the substantive issues. It’s not about his family and my family. It’s about your family, and your family’s hurting badly.