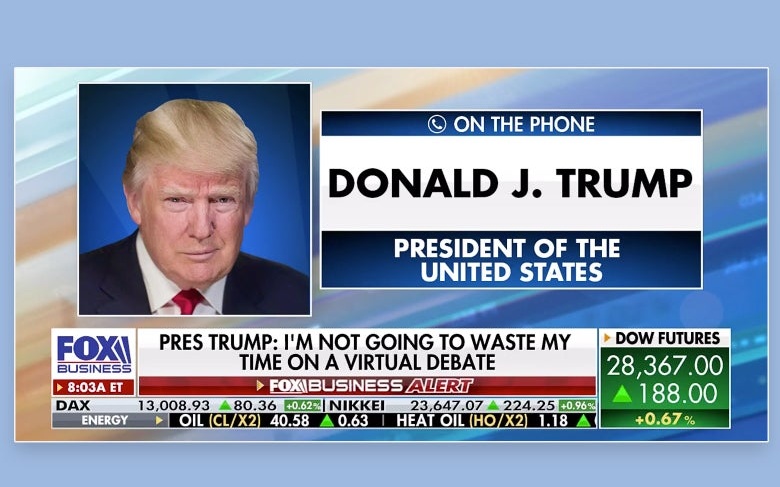 In a Thursday marked by two rambling phone-in appearances on Fox TV, Trump rejected a virtual second Presidential debate with Biden. Instead, he said he might hold a rally in Florida on Saturday and Pennsylvania on Sunday.

With Biden widening his lead both in national polls and in swing states, Trump called Biden’s running mate Sen. Kamala Harris “a monster” and a “communist”. He sneered that Democrat Gov. Gretchen Whitmer of Michigan is a “lockup queen”, denouncing her measures to contain Coronavirus, hours after the Justice Department revealed a plot by a right-wing militia to kidnap her.

He bluntly rejected the decision of the commission overseeing debates that, in view of Trump’s illness, the second Presidential debate on October 15 must be virtual.

“These People Should Be Indicted”

White House sources said Trump has been working up his anger as he watched TV coverage, imploring aides to let him resume campaign rallies.

So on Thursday morning, Trump made a cold call to the Fox Business program of Maria Bartioromo.

He began with the rejection of the virtual debate, announced moments earlier by the commission.

"I'm not going to waste my time on a virtual debate" — Trump, on with Maria Bartiromo, begins his first post-coronavirus interview by saying he's pulling out of the second debate. (He sounds a little hoarse.) pic.twitter.com/R43JSszfll

Then he issued his order to the Attorney General.

Unless Bill Barr indicts these people for crimes, the greatest political crime in the history of our country, then we’re going to get little satisfaction unless I win and we’ll just have to go, because I won’t forget it….

These people should be indicted. This was the greatest political crime in the history of our country, and that includes Obama and it includes Biden.

For years, Trump has portrayed the investigation of his campaign’s links with Russia in 2016 as a “witch hunt” and a “hoax”. Trying to reverse culpability, he has falsely declared that Obama, Vice President Biden, and the FBI “spied” on the campaign.

In fact, the FBI was surveilling Russian officials in the US who were intervening in the election. They also obtained a warrant from a special Government court to watch Trump staffer Carter Page, suspected of being a possible Russian agent since 2013.

Appointed in January 2019, Barr helped Trump bury the 446-page Mueller Report, which documented the Trump-Russia links and set out evidence of Trump’s obstruction or attempted obstruction of justice.

Barr has also appointed US Attorney John Durham to investigate the FBI and other US agencies, trying to back up Trump’s declarations of the nefarious spying on him and his campaign. Durham’s report may be released just before the November 3 election, in an attempt to give Trump a last-minute boost at the polls.

Trump pressed Barr in his 40-minute ramble to Bartiromo, proclaiming that the Attorney General would go down in history “as a very sad, sad situation” if he did not indict Democrats such as Biden and Barack Obama.

Trump insisted, “He’s got all the information he need. They want to get more, more, more, they keep getting more. I said, ‘You don’t need any more.’”

He also sent a message to Secretary of State Mike Pompeo, complaining that he had not released 2016 Democratic candidate Hillary Clinton’s e-mails: “I’m not happy about him for that reason.”

And he derided FBI Director Christopher Wray, who has undercut Trump’s lies that mail-in voting is fraudulent: “He’s been disappointing.”

As Maria Bartiromo tries to end the interview, Trump yells out of nowhere, "why isn't Hillary Clinton being indicted?!" pic.twitter.com/v5RyLcKvsL

Trump: “When You Catch It, You Get Better”

Trump’s erratic, sometimes bizarre comments and behavior reinforced concerns that he might be suffering the side effects of the steroid Dexamethasone, which he is continued to take after his discharge from Walter Reed Medical Hospital on Monday.

The drug can cause mania and even psychosis, and White House aides privately are expressing concern about Trump’s mood swings are linked to the steroid, normally used only for severe cases of Coronavirus.

But Trump doubled down on his “I feel great”, even as he coughed and rasped his way through a Thursday night call to his friend, Fox TV polemicist Sean Hannity. Refusing to provide the result of any test to back up his self-assessment that he has recovered, he announced the rallies.

Holy shit. Trump, who won't say if he's tested negative for coronavirus (so he either hasn't been tested or is still testing positive), says he plans to do a rally this Saturday night in Florida. pic.twitter.com/e6s5O5kEHY

“I’m back because I’m a perfect physical specimen and I’m extremely young,” he boasted to Bartiromo.

His doctor Sean Conley, who covered up the extent of his patient’s illness last weekend at Walter Reed Military Hospital, issued a statement enabling Trump to resume public activities on Saturday. Conley had previously said that doctors wanted Trump to “get through to Monday” without any symptoms.

But Senate Majority Leader Mitch McConnell, Trump’s political protector for more than 3 1/2 years, distanced himself from the image of a President in denial over Coronavirus — even as more than two dozen Administration and GOP figures have announce positive tests since a September 26 ceremony for Supreme Court nominee Amy Coney Barrett at the White House.

“I haven’t actually been to the White House since August the 6th because my impression was that their approach to how to handle this is different from mine and what I suggested that we do in the Senate, which is to wear a mask and practice social distancing,” McConnell told reporters.

The Washington DC government finally acted over the White House’s refusal to contact attendees at the Barrett event. The city’s Health Department released an open letter to staff members and guests, asking them to get tested immediately.

Democratic candidates Biden and Harris maintained their campaign message of leadership and responsibility on Thursday with discussions in Arizona, a normally-Republican state which has swung to the Democratic ticket in polling this autumn.

The Biden camp, which has emphasized safety measures over the virus as Trump denied the threat responded to Trump’s rejection of the virtual debates with the announcement of a Town Hall meeting on October 15, and an offer to move the second debate to October 22.

Meanwhile, House Speaker Nancy Pelosi said she will introduce legislation on Friday creating a commission under the provision of the 25th Amendment, which provides for the temporary transfer of power to the Vice President if a President is unable to carry out his duties.

Trump snapped on Twitter, “Crazy Nancy is the one who should be under observation.”

But in his Thursday night call to Hannity, Trump falsely said California has water rationing because its officials “want to take care of certain little tiny fish, that aren’t doing very well without water”.

He concluded with his declaration of Obama-Biden “treason” and reinforced his threat to defy the outcome of the November 3 election.

Trump concludes his interview with Hannity by claiming that Mike Pence refusing to commit to a peaceful transition of power during the VP debate was his "best answer" of the night pic.twitter.com/qsqzKIGhyW