President Rouhani Appeals to Turkey’s Erdoğan Over Economy and Trade 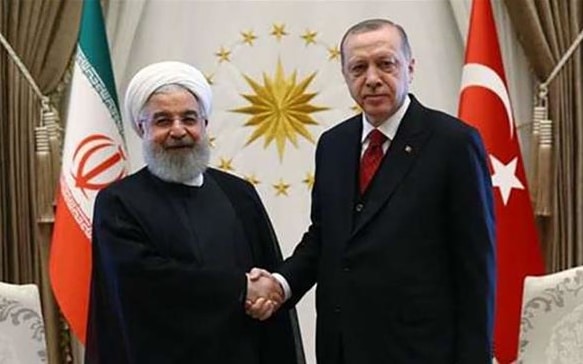 Rouhani proclaied in a Thursday phone call that Iranian-Turkish ties could be a “model for other neighbors” as he emphasized development of economic and trade relations.

The Islamic Republic’s trade with Turkey fell 70% this spring amid the Coronavirus pandemic, totalling only $645 million in the first quarter of 2020. Iran’s exports to Ankara were only $270 million with a 99% fall in petrochemical exports, essential as US sanctions choke off Iran’s oil sales.

Iran has also suffered a 62% fall in exports to its largest customer China; a 60% decline with its second-largest customer, the Gulf States; and up to 95% with India, Japan, and South Korea.

Referring to a meeting in Tehran of the High Council for Iran-Turkey Cooperation, Rouhani called on Erdoğan to implement agreements, especially forcommercial and banking ties, as soon as possible.

He also defied Iran’s record-setting surge in Coronavirus, with official daily cases nearing 6,000 and deaths soaring above 300, to say that observation of health protocols can ensure an increase in air and truck traffic.

Rouhani’s office quoted Erdoğan, “We will continue to support Iran against unilateral US sanctions and we will do our best to develop trade and economic relations as in the past”, but did not refer to any specific commitments.

And Daily Sabah, close to the Erdoğan Government, does not mention Iran’s economy in its summary. Instead the site’s article focuses on discussion over the conflict in Syria and between Azerbaijan and Armenia.