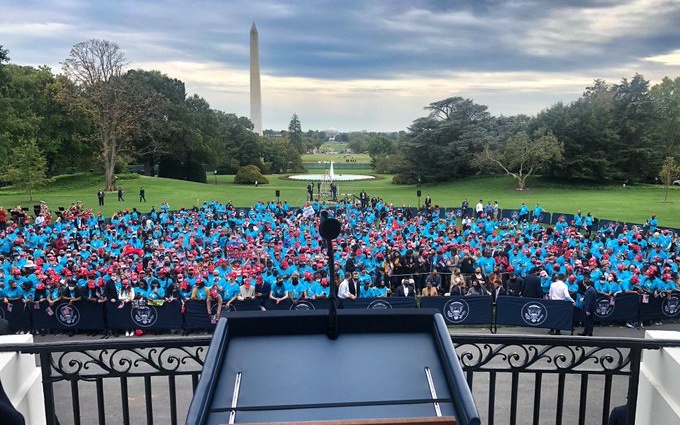 Still recovering from Coronavirus, Donald Trump risks another “super-spreader” event at the White House, speaking to hundreds of tightly-packed attendees on the South Lawn.

Trailing in polls to Democratic Presidential candidate Joe Biden and anxious to resume rallies, Trump shouted from the balcony, “We’ve got to vote these people into oblivion.”

The White House had said that all at the event would have temperatures and would wear masks, but photographs showed few covering their faces.

ABC News reported that some of the “supporters” were paid for their presence.

The daily rate is increasing in 39 states, with six — Missouri, Montana, North Dakota, Ohio, Oklahoma, and West Virginia — returning record case numbers on Friday. Wisconsin, which reported its record earlier in the week, has set up field hospitals.

In the 18-minute address, ostensibly on law and order, Trump immediately removed his surgical mask and pronounced, “We cannot allow our country to become a socialist nation.” He repeated his standard disinformation that mail-in voting is fraudulent.

He then encouraged the crowd to defy measures to contain Coronavirus, saying they are “unscientific”.

His chief medical confidante, the neuroradiologist and Fox TV commentator Dr. Scott Atlas, reinforced the message by also declining to wear a mask.

Off to the side of the White House event, not wearing a mask: Dr. Scott Atlas pic.twitter.com/yECbfzyU6t

I think it’s important the president makes sure of two things. One, that he is clear, he is not a spreader…[like] the super spreader event he had for the Supreme Court announcement.

And secondly, I think it’s important that he make it clear to all the people that they should be socially distanced…and wearing masks. That’s the only responsible thing to do.

Biden framed the election as a choice between defense of workers and Trump’s exploitation of the Presidency for himself and his friends: “The president can only see the world from Park Avenue. I see it from Scranton and Claymont [Biden’s childhood hometowns in Pennsylvania and Delaware]. Y’all see it from Erie.”

Trump is among more than two dozen Administration and GOP figures who have revealed positive tests since October 1. Many had been present at the White House ceremony for Supreme Court nominee Amy Coney Barrett on September 26, an event called a “super-spreader” by the Government’s top Coronavirus expert Dr. Anthony Fauci.

After receiving emergency oxygen treatment, Trump was evacuated to Walter Reed Medical Hospital on October 2. Receiving an experimental antibody cocktail, the antiviral drug Remdesivir, and the steroid Dexamethasone, he demanded his discharge from Walter Reed last Monday, soon posing on the White House balcony and declaring that as “a perfect physical specimen”, he “may be immune” to the virus.

Medical experts have noted that Coronavirus normally takes 7 to 10 days to spread through the body. With the suppression of the virus through steroid treatment — which sometimes has side effects of mania and even psychosis — the period is up to 20 days.

But Dr. Sean Conley, who has issued misleading statements throughout Trump’s illness, again covered for Trump on Saturday. He declared a test showed Trump is no longer a “transmission risk to others” as there is no evidence “of actively replicating virus”.

The White House has refused to release a negative test result backing up Trump’s insistence that he has defeated the virus.

Despite his hospitalization, Trump continued his denial and disinformation. He repeated that “it’s going to disappear” and that a vaccine is coming out “very, very quickly”.

Trump, who has been calling Fox TV programmes and made a prerecorded video appearance on the channel on Friday night, initially said he would hold a Florida rally on Saturday.

The campaign postponed the event after criticism that Trump may still be infectious, but has now set it for Monday, followed by gatherings in Pennsylvania and another area of Florida on Tuesday and Wednesday.

Trump’s second debate with Biden on Thursday has been postponed for a week after Trump refused a virtual encounter. Biden will instead hold a Town Hall meeting that evening.

Last weekend, Trump called friends from the hospital to suggest another photo opportunity. As he left Walter Reed, he would pose as a frail patient. But when people noticed him, he would open his dress shirt to reveal a Superman T-shirt.