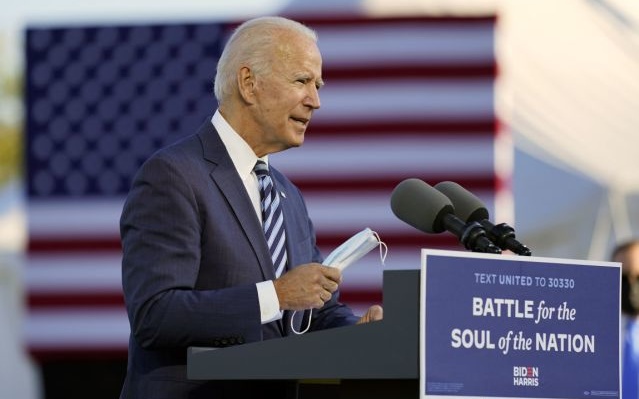 Donald Trump, ill with Coronavirus, adds to the damage and chaos of the pandemic by abruptly ordering an end to talks on a $2.2 trillion relief package.

There is more chaos with the White House with Stephen Miller, Trump’s hardline anti-immigration advisor, as the latest high-profile Administration or Republican figure to test positive.

Amid the turmoil, Democratic Presidential nominee Joe Biden called for unity and responsibility as he noted that “we’re experiencing today is neither good nor normal”.

In a 22-minute outdoor speech in Gettysburg, Pennsylvania on the Civil War battlefield, Biden said the US is again “a battle for the soul of the nation”.

This pandemic is not a red state or blue state issue. This virus doesn’t care whether you live, or where you live, what political party you belong to, it affects us all. It will take anyone’s life. It’s a virus. It’s not a political weapon….

Trump: “Stop Negotiating Until After the Election”

Treasury Secretary Steven Mnuchin and House Speaker Nancy Pelosi had been in protracted negotiations over the relief package, hoping to provide some assistance to millions of Americans put out of work by the pandemic. Democrats have proposed a $2.2 trillion package; Republicans currently are offering $1.6 trillion.

But less than 19 hours after demanding and getting his discharge from Walter Reed Medical Hospital on Monday, Trump tweeted:

…request, and looking to the future of our Country. I have instructed my representatives to stop negotiating until after the election when, immediately after I win, we will pass a major Stimulus Bill that focuses on hardworking Americans and Small Business. I have asked…

Trump continued that he was ordering Senate Majority Leader Mitch McConnell to “focus full time” on the rushed confirmation of Supreme Court nominee Amy Coney Barrett, hoping to have her in place if he challenges the election outcome.

Trump’s unexpected intervention immediately took 2% off the value of the stock market, with the Dow Jones plummeting 600 points after gains in the morning. The index ended the day down almost 375 points at 27,772.76.

Perhaps because of the plunge, Trump backtracked Tuesday night. He urged both the Senate and the House to “IMMEDIATELY Approve” revival of a loan program for small businesses, funds to prevent airlines from furloughing or laying off workers, and another round of stimulus checks.

The House & Senate should IMMEDIATELY Approve 25 Billion Dollars for Airline Payroll Support, & 135 Billion Dollars for Paycheck Protection Program for Small Business. Both of these will be fully paid for with unused funds from the Cares Act. Have this money. I will sign now!

He followed up with a jab at Pelosi, “If I am sent a Stand Alone Bill for Stimulus Checks ($1,200), they will go out to our great people IMMEDIATELY. I am ready to sign right now. Are you listening Nancy?”

But he had already put himself at odds not only with the negotiators, the market, and more than 26 million people claiming unemployment benefit, but also with Federal Reserve chair Jerome Powell.

In the morning, Powell warned that failure to confirm more Federal assistance would weaken any economic recovery after a record-setting contraction of 9.6% in GDP between April and June.

— 40% of restaurants face closure in ~6 months, per surveys

— Tens of thousands of airline workers will be laid off

The episode echoed Trump’s abrupt decision in December 2018 to shut down the Federal Government for 35 days, the longest closure in US history. He told Pelosi and Senate Minority Leader Chuck Schumer:

Trump tweeted and retweeted furiously throughout the day, with the wild swings in scores of messages reinforcing concern about his treatment with the steroid Dexamethasone, normally used only in severe cases of Coronavirus to relieve breathing difficulty.

Medical experts warned, before Trump’s release after 72 hours from hospital, that the steroid suppressed the spread of the virus, masking the patient’s condition. They also noted that side effects could include mania and psychosis.

In the Twitter barrage, Trump called FBI officials “Scum” and 2016 Democratic Presidential nominee Hillary Clinton a “Disgraceful Con Artist“; declared that the November 3 vote “will be the most corrupt Election in American History!”; and accused the Food and Drug Administration of a “Political Hit Job” for insisting on health and safety guidelines for a Coronavirus vaccine.

He is the 15th White House or Republican figure with a confirmed infection in the last five days. Almost all are connected either with the White House ceremony on September 26 for Supreme Court nominee Barrett, or with preparation for the first Presidential debate.

The White House operated with a skeleton staff on Monday, with a man in full protective equipment disinfecting the press briefing room and other areas. The Capitol was empty after Senate leaders agreed to adjourn for two weeks.

And the military is now affected with Gen. Mark Milley, the chairman of the Joint Chiefs of Staff, almost all of the JCS, and several other commanders quarantining.

The military leaders were exposed to the virus by Adm. Charles Ray, the vice commandant of the Coast Guard, whose positive test was announced yesterday.

This is going on at the White House today. (This is the press area.) Video by @jabinbotsford. pic.twitter.com/46nFvIeKHs