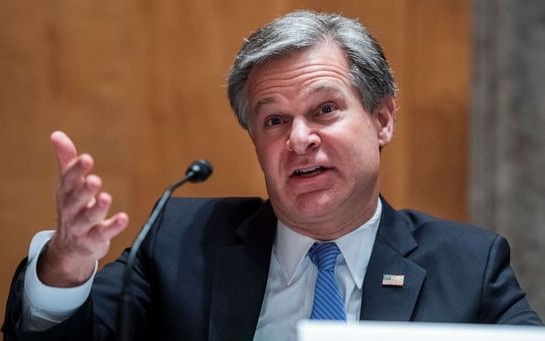 FBI Director Christopher Wray: We have not seen a coordinated national voter fraud effort in a major election” (Tom Williams/Getty)

Republican Governor Charlie Baker passionately knocks back Trump’s threat to remain in office if he loses the election.

Those of us who serve in public life will do everything we can to make sure the people’s will is followed through and executed on…because that is fundamentally why there is a United States of America in the first place.

Baker then left the podium, apparently shaking his head at Trump’s blatant gambit.

A Republican governor who is as angry as every Republican should be right now who claims to be patriotic. pic.twitter.com/BuXCwlGQX6

The White House has issued a public warning to FBI Director Christopher Wray over his remarks challenging Donald Trump’s plan to defy an adverse outcome in the November 3 elections.

Wray told a Senate committee on Thursday that there was no evidence of significant fraud in mail-in voting:

FBI Director Christopher Wray on voting by mail: "We have not seen historically any kind of coordinated national voter fraud effort in a major election, whether it's by mail or otherwise. We have seen voter fraud at the local level from time to time." https://t.co/T8eHUNRjEl pic.twitter.com/g5hgwMi7y5

The statement blunted Trump’s false declarations, made for months, that mail-in voting is fraudulent. Trailing Democratic nominee Joe Biden in polls, Trump is hoping to suppress the postal turnout, which he believes will favor his rival.

If that does not prevent a Biden triumph, Trump has stepped up his signals that he will refuse to accept the result, resting on his lie about “millions” of fraudulent ballots.

On Tuesday, he linked the plan to his rushed effort to confirm a Supreme Court Justice, likely to be the arch-conservative Judge Amy Coney Barrett.

And on Wednesday and Thursday, he refused to say that he will step down if he loses, issuing the ultimatum, “Get rid of the ballots and there won’t be a transfer [of power]. There will be a continuation.”

EA on Monocle 24: Can Trump Get Away With Rejection of A Lost Election?
TrumpWatch, Day 1,344: GOP Legislators Slap Down Trump’s “Hoax Election” Plan

Despite a series of Republican legislators — including Senate Majority Leader Mitch McConnell — pushing back on Thursday with their pledges for an “orderly transition of power”, Trump pressed ahead yesterday.

And White House Chief of Staff Mark Meadows aimed at FBI Director Wray, “With all due respect to Director Wray, he has a hard time finding e-mails in his own FBI, let alone figuring out whether there’s any kind of voter fraud.”

Meadows whipped up an announcement by the Justice Department, led by Trump’s political operative Attorney General William Barr, that nine military ballots in a northeastern Pennsylvania county that were found “discarded” into a call for a high-profile FBI inquiry: “Perhaps he needs to get involved on the ground, and then he would change his testimony on Capitol Hill.”

Officials found no crime over the discarded ballots, seven of which were cast for Trump.

FACT-CHECK: Team Trump capitalized on a tiny ballot incident in Pennsylvania to claim there is widespread “voter fraud” and that Democrats are “stealing the election.” These are baseless accusations, detached from the known facts of what happened in PA. https://t.co/mRqVwiFJIe

Meadows refused to say if Trump had confidence in Wray: “We have a number of people that continue to serve at the pleasure of the president that he has differing degrees of confidence in.”

Trump infamously fired Wray’s predecessor James Comey in May 2017 in an attempt to bury the Trump-Russia investigation, and assailed Acting Director Andrew McCabe for months until he resigned.

Trump has maintained the pressure on Wray, admonishing him in both the Trump-Russia and Trump-Ukraine affairs.

Last week, after Wray testified to Congress about “very active efforts” by Russia to interfere in the 2020 election to damage Democratic candidate Biden, Trump snapped on Twitter, repeating his lie about mail-in voting:

But Chris, you don’t see any activity from China, even though it is a FAR greater threat than Russia, Russia, Russia. They will both, plus others, be able to interfere in our 2020 Election with our totally vulnerable Unsolicited (Counterfeit?) Ballot Scam. Check it out! https://t.co/mH3vrHWvS8