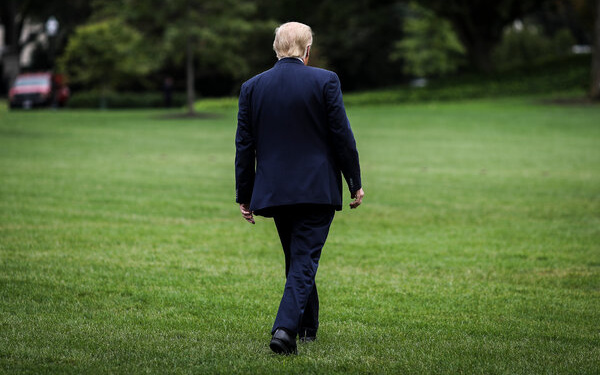 In a rare public rebuke of Donald Trump, a series of Republican legislators slap down his intention to refuse the outcome of the November 3 election if he loses to Democratic nominee Joe Biden.

Trump stepped up the signaling of his plan this week, linking the rushed confirmation of a Supreme Court Justice to his challenge of the election and indicating that he will declare — falsely — that fraudulent mail-in ballots invalidate the vote: “Get rid of the ballots and there won’t be a transfer [of power]. There will be a continuation.”

Trump doubled down on Thursday, “We want to make sure the election is honest, and I’m not sure that it can be. I don’t know that it can be with this whole situation, unsolicited ballots.”

His threat succeeded in taking headlines away from the Coronavirus pandemic.

More than 800,000 Americans filed for unemployment in the ongoing, record-setting economic downturn. More than 26 million are receiving benefits, with millions more leaving the workforce and not recorded in Labor Department statistics.

But throughout Wednesday, GOP Senate and House members lined up on social media and interviews to pledge respect for the outcome of the Presidential vote. They included Senate Majority Leader Mitch McConnell, Trump’s chief enabler and protector in Congress for almost four years:,

The winner of the November 3rd election will be inaugurated on January 20th. There will be an orderly transition just as there has been every four years since 1792.

Rep. Liz Cheney, the third-ranking Republican in the House, promised, “America’s leaders swear an oath to the Constitution. We will uphold that oath.”

Sens. Susan Collins and Marco Rubio echoed the message. Collins said, “I don’t know what his thinking was, but we have always had a peaceful transition between administrations. The peaceful transfer of power is a fundamental tenet of our democracy, and I am confident that we will see it occur once again.”

Sen. Jeff Merkley evaluated, “This is the way authoritarian dictators operate. They have show elections and they say, ‘I win, and I will make sure the results show I win.’”

And FBI Director Christopher Wray, in testimony to a Senate testimony, took down Trump’s line on mail-in ballots:

We have not seen historically any kind of coordinated national voter fraud effort in a major election, whether it’s by mail or otherwise. We have seen voter fraud at the local level from time to time.

By the end of the day, the unusual sight of bipartisan agreement in the Senate prevailed. A
resolution, passing by unanimous consent, “reaffirmed the Senate’s commitment to the orderly and peaceful transfer of power called for in the Constitution of the United States, and for other purposes”.

A few Republicans still tried to prop up Trump’s plan.

Sen. Lindsey Graham — Trump’s close friend, but involved in an unexpectedly close re-election battle in South Carolina — started with an echo of the rebuff to Trump, “People wonder about the peaceful transfer of power. I can assure you, it will be peaceful.”

But he swung behind the plan for Trump’s resistance through a conservative-packed Supreme Court:

Graham’s position was in stark contrast to that of Joe Biden, who emphasized equality and rights in the successor to Justice Ruth Bader Ginsburg, who died last Friday:

We are a more just, more equal nation because of Justice Ginsburg. Now it’s up to all of us to carry on her fight. pic.twitter.com/kFJygqQN0t

Sen. Rick Scott of Florida announced legislation to curb mail-in voting, with every state required to count and report its final results “within 24 hours after polls close on Election Day” — a bill overriding the process that local officials conduct and certify elections, and the Federal Government has no role.

White House Press Secretary Kayleigh McEnany initially tried to evade reporters’ questions about whether Trump will commit to a peaceful transition of power.

She finally said, “The President will accept the results of a free and fair election” — leaving open his objection that an election which he loses must be “unfair”.

Asked if Trump will accept a loss, McEnany repeated her line about a “fair election”.