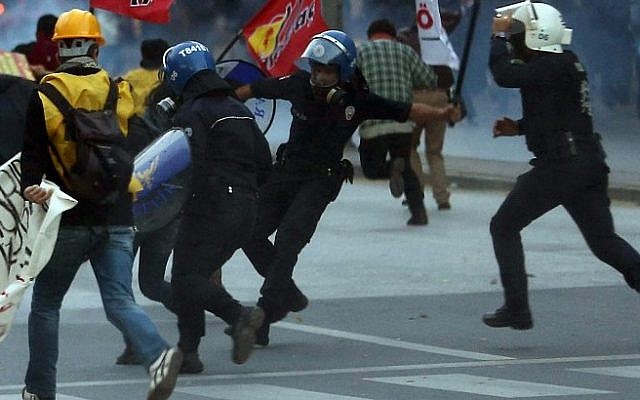 A Turkish prosecutor has issued detention warrants for 82 people involved in protests supporting Syrian Kurdistan in 2014.

Turkish “security sources” revealed the warrants on Friday. The officials said 18 of the suspects have been seized. They include the Mayor of Kars in northeast Turkey, Ayhan Bilgen; former legislator Sırrı Süreyya Önder; and other officials of the Turkish People’s Democratic Party (HDP).

The warrants allege that Selahattin Demirtaş, the now-detained co-chair of HDP, and branches of the party urge Kurdish people to take “violent action and pour into the streets” in southeast Turkey on October 6-7, 2014.

The protesters accused the Turkish military of inaction as the Islamic State besieged Kobani, a key Kurdish city in northern just across the border.

Amid the protests, about 37 people were killed in clashes, framed as “clashes between supporters and opponents” of the Turkish Kurdish insurgency PKK by the Turkish prosecutor.

The Government of President Recep Tayyip Erdoğan has cracked down on the HDP, the third-largest party in the Turkish Parliament. It claims the HDP is an outlet for the PKK, which has fought Turkish security forces for more than 35 years.

The Islamic State, having taken much of northern and eastern Syria, launched its siege of the city of Kobani on September 13, 2014.

The city, on the Turkish-Syrian border, is the center of one of three Kurdish cantons in northern Syria. Kurdish forces, with assistance from a US-led coalition and some anti-Assad rebels, restored full control of Kobani in January 2015 and reclaimed almost all villages in the canton by April.

Ankara considers the leading Kurdish militia YPG to be part of the PKK. They claim that the YPG/PKK “exploited the situation” to set up the Kurdish-controlled cantons in northern Syria to “weaken the Turkish state through disrupting unity”.

The sources said 761 people, including 326 Turkish security personnel, were killed in unrest in southeast Turkey in autumn 2014. They assert that 197 schools were burnt down, 269 public buildings destroyed, and 1,731 homes and workplaces were looted, destroyed or burned.