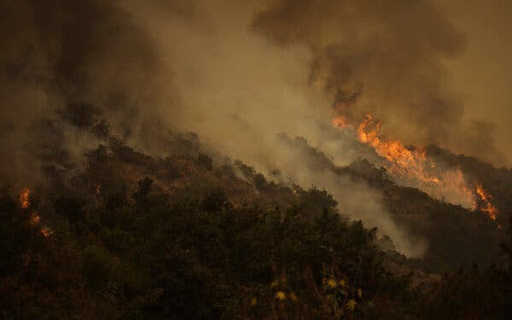 In an outdoor speech in Delaware, Biden said on Monday that Trump was a “climate arsonist” whose denial and inaction had fed destruction, from the fires over millions of acres to flooding in the Midwest and hurricanes along the Gulf Coast.

Seizing on Trump’s racially-coded “culture wars” rhetoric, Biden said the threat to “suburbs” was not from the specter of invading extremists but from global warming and environmental damage, fed by Trump’s stripping of regulations and protections.

If you give a climate arsonist four more years in the White House, why would anyone be surprised if we have more of America ablaze?

Biden has proposed spending $2 trillion over four years to escalate the use of clean energy and ultimately phase out the burning of oil, gas and coal. He has pledged to build 500,000 electric vehicle charging stations, build 1.5 million new energy-efficient homes, and eliminate carbon pollution from the power sector by 2035.

Calling for policy and action “grounded in science”, he explained, “We have to act as a nation. It shouldn’t be so bad that millions of Americans live in the shadow of an orange sky, and they’re left asking: ‘Is doomsday here?’”

He linked Trump’s response to climate change and disasters to denial and inaction over Coronavirus, job losses and deprivation, and social justice.

“I know this feeling of dread and anxiety extends well beyond the fires,” Biden said. “It’s happening everywhere, and it’s happening now — and it affects us all.”

Calling for unified action to repair the damage, the nominee summarized:

We will solve the climate crisis. We will build back better than before….We see the light through the dark smoke.

We never give up. Always.

Trump, who said nothing about the wildfires for weeks, tried to regain the initiative with a photo opportunity in California on Monday. He appeared alongside Governor Gavin Newsom and State officials.

But far from addressing the emergency, with 27 confirmed deaths and dozens of people missing, Trump doubled down on his climate change denial.

He proclaimed that the cause was poor forest management and insisted that “science doesn’t know” about the issues.

As there were new evacuations from Idaho as well as California and Oregon, Trump launched into a bizarre attempt to explain the fires as soon as he landed at Sacramento McClellan Airport, not far from a recently-contained blaze that burned more than 363,000 acres.

When trees fall down after a short period of time, they become very dry — really like a matchstick. And they can explode. Also leaves. When you have dried leaves on the ground, it’s just fuel for the fires.

At the subsequent meeting, Newsom and his top environmental advisor politely pressed Trump to acknowledge climate change. The Governor said:

Something’s happening to the plumbing of the world, and we come from a perspective, humbly, where we submit the science is in and observed evidence is self-evident that climate change is real, and that is exacerbating this.

While thanking Trump for federal help, Newsom knocked back Trump’s attempt to shift blame to states for forest management. He noted that only 3% of land in California is under state control while 57%T is federal forest land.

So I think there’s an area of at least commonality on vegetation, forest management. But please respect — and I know you do — the difference of opinion out here as it relates to this fundamental issue on the issue of climate change.

Trump merely said, “Absolutely”, but he could not check his denial after a statement by Wade Crowfoot, California’s Secretary for Natural Resources: “If we ignore that science and sort of put our head in the sand and think it’s all about vegetation management, we’re not going to succeed together protecting Californians.”

Crowfoot replied, “I wish science agreed with you.”

Ralph Propper, the president of the Environmental Council of Sacramento, said, “Raking the leaves and forest floors is really inane. That doesn’t make sense at all. “We’re seeing what was predicted, which is more extremes of weather.”

Trump has maintained his denial and castigated states as his Administration has savaged environmental regulations and promoted the burning of fossil fuels.

Executive orders and action by Trump’s officials and the Environmental Protection Agency, led by former coal lobbyist Andrew Wheeler, have:

*Curbed any mention of climate change by Government agencies and scientists

*Gutted Obama-era measures over waterways and vehicle emissions, and derided a plan to limit scientific data for health regulations

*Lifting restrictions on hunting of animals such as bears, wolves, coyotes, and their young