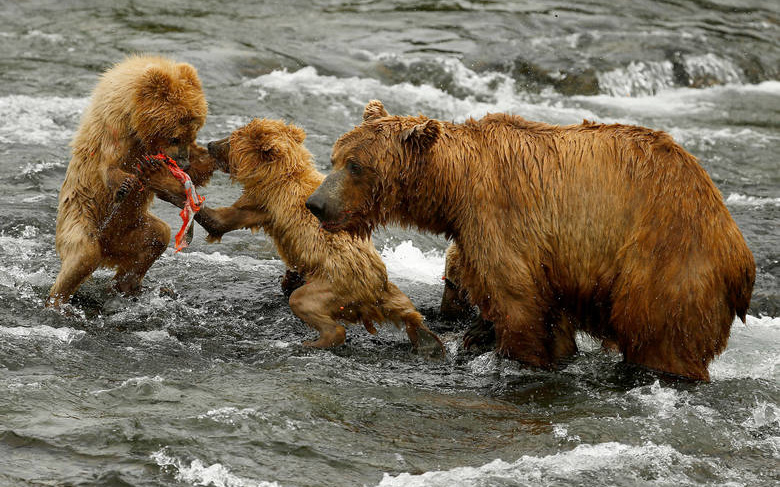 The Trump Administration lifts bans in Alaska on controversial hunting techniques, while continuing its stripping of environmental protections.

The National Park Service’s new policy allows hunters to use dogs, to bait grizzly bears with doughnuts soaked in bacon grease, and to shine spotlights to blind and shoot hibernating black bear mothers and their cubs in their dens.

Wolves and coyotes, including their pups, can be killed as mothers wean their young. Swimming caribou can be shot from motorboats.

The Alaska Board of Game had allowed baiting tactics; however in 2015, the Obama Administration supported the National Park Service, whose duty is to protect wildlife populations, by eliminated sport hunting and trapping on federal public lands in Alaska.

A bipartisan group of 79 members of Congress and hundreds of scientists opposed the change. They cited “little scientific evidence” that the resumption of baiting techniques and shooting in dens will increase the availability of other game.

Trump has made the dismantling of the bans a priority, following the lead of his sons Donald Jr. and Eric. Both men have featured pictures of themselves with big game which they have slain in Africa.

The law requires federal agencies to consider the environmental impacts of proposed federal projects, including the construction of major highways, airports, oil and gas drilling, and pipelines.

Trump’s order removed the requirement of environmental reviews, using the pretext of the Coronavirus crisis and its economic impact:

From the beginning of my Administration, I have focused on reforming and streamlining an outdated regulatory system that has held back our economy with needless paperwork and costly delays. The need for continued progress in this streamlining effort is all the more acute now, due to the ongoing economic crisis.

The Administration announced in January that it would weaken the Act, including the requirement that climate change be considered in plans for highways, pipelines, and other major infrastructure projects.

Trump’s order also lifts environmental review requirements in the Endangered Species Act and the Clean Water Act. He had already allowed Federal agencies to weaken regulations “that may inhibit economic recovery”. The Environmental Protection Agency notified the fossil fuel industry that it might suspend enforcement of laws, such as the requirement of public input on proposals.

Earlier this month an EPA rule made it more difficult for states, tribes, and the public to protest or block pipelines and other projects that could cause air and water pollution. The rule set a strict one-year deadline for states and tribes to approve or deny the projects.

Trump also signed another executive order last month that allows several federal agency heads to weaken regulatory requirements “that may inhibit economic recovery.” The move prompted the EPA to alert the fossil fuel industry that it could suspend enforcement of certain environmental laws, including those that require the gathering of public input on projects and the monitoring of air pollution levels.

Under Trump — a denier of man-made climate change — and former coal lobbyist Andrew Wheeler as head of the Environmental Protection Agency, the Administration has:

*Gutted Obama-era measures over waterways and vehicle emissions, and derided a plan to provide scientific data for health regulations

*Curbed any mention of climate change by Government agencies and scientists