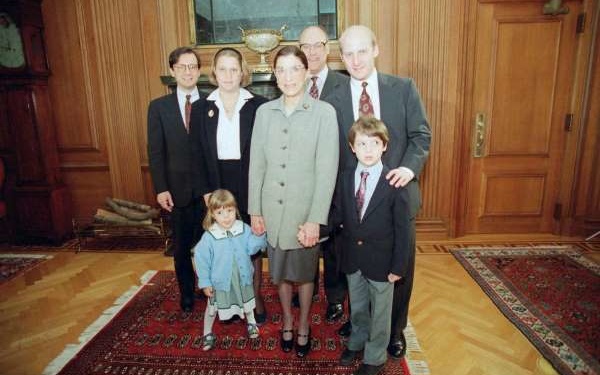 Supreme Court Justice Ruth Bader Ginsburg with her family on October 1, 1993. Her granddaughter Clara Spera is in the front on the left. (Doug Mills/AP)

Last week, days before her death on Friday from pancreatic cancer, Ginsburg dictated a note to her granddaughter Clara Spera: “My most fervent wish is that I will not be replaced until a new president is installed.”

Trump, who is trying to rush through the confirmation of a replacement by the November 3 election, phoned into his favored outlet Fox and Friends on Monday morning. He snapped that Ginsburg’s words might have been those of Rep. Adam Schiff, who led the impeachment proceedings against Trump; Senate Minority Leader Chuck Schumer or House Speaker Nancy Pelosi:

I don’t know that she said that, or if that was written out by Adam Schiff, and Schumer and Pelosi. That came out of the wind. It sounds so beautiful, but that sounds like a Schumer deal, or maybe Pelosi or Shifty Schiff.

Trump on RBG's reported dying wish that next pres fills her seat: "I don't know that she said that, or was that written out by Adam Schiff and Schumer and Pelosi. I would be more inclined to the second … But that sounds like a Schumer deal or maybe a Pelosi or Shifty Schiff." pic.twitter.com/zE979kK2Q3

Trump’s comments came hours before the confirmation that Ginsburg will be the first woman to lie in state at the US Capitol. She will lie in repose at the Supreme Court on Wednesday and Thursday, before lying in the Capitol on Friday.

National Public reporter Nina Totenberg, a long-time Ginsburg friend who first reported the justice’s final wish, said she confirmed the story with witnesses, including her doctor: “I checked because I’m a reporter.”

Mr. President, this is low. Even for you.

No, I didn’t write Ruth Bader Ginsburg’s dying wish to a nation she served so well, and spent her whole life making a more perfect union.

But I am going to fight like hell to make it come true.

No confirmation before inauguration.

Meanwhile, Democratic legislators continued to emphasized the threat to healthcare for tens of millions of Americans from a rush by Trump and Senate Majority Leader Mitch McConnell to put an arch-conservative on the Supreme Court.

Sen. Chris Murphy of Connecticut noted the Trump Administration’s effort to bury ObamaCare, including the covering of pre-existing conditions:

Heads up – anybody in this country who has had COVID, or ever tests positive for the COVID antibodies, has a preexisting condition.

And when Trump rams through an anti-health care judge, and the ACA is eliminated, your rates are going through the roof.

Democratic Presidential nominee Joe Biden said in a Sunday speech, “In the middle of the worst global health crisis in living memory, Donald Trump is before the Supreme Court, trying to strip healthcare coverage away from tens of millions of families.”