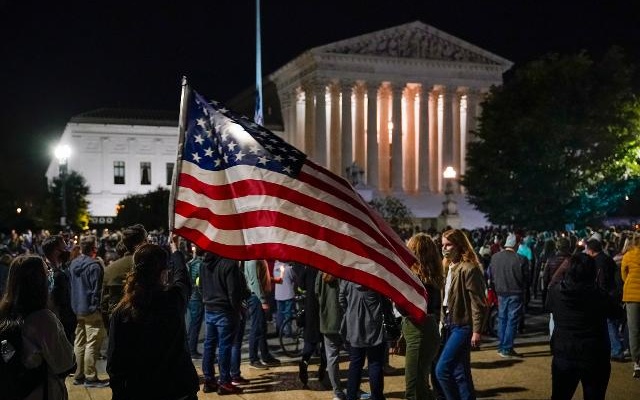 Speaking in Philadelphia on Sunday, two days after Ginsburg died at the age of 87, Biden challenged the effort of Trump and Senate Majority Leader Mitch McConnell to confirm an arch-conservative justice before the November 3 election.

President Trump has already made clear this is about power: pure and simple power. The voters should make clear on this issue that the power in this nation resides with them, the American people. The voters….

To jam this nomination through the Senate is just an exercise in raw political power and I don’t believe the people of this nation will stand for it.

Putting a dedicated conservative on the bench could complete the Trump camp’s effort to demolish ObamaCare, which has provided health coverage for tens of millions of previously uninsured Americans.

Through the Justice Department led by Trump’s enabler William Barr, lawyers have sought in lower courts to curb the Affordable Care Act, which took effect in 2010. The lawsuits followed the Administration’s unsuccessful attempt in 2017 for Congressional repeal, scuttled by the last-minute objection of the late Sen. John McCain.

While Trump and McConnell see an opportunity to shore up the Republican vote with a quick confirmation, the Biden campaign views the significance of health care — and the threat to it by a conservative-dominated Court — as an incentive for voters to back Democrats for the White House and for control of the Senate and thus Congress.

Millions of Americans who are voting because they know their healthcare hangs in the balance. In the middle of the worst global health crisis in living memory, Donald Trump is before the Supreme Court, trying to strip healthcare coverage away from tens of millions of families. This took away the peace of mind of more than 100 million Americans with preexisting conditions. If he succeeds, insurers could once again discriminate or drop coverage completely for people living with preexisting conditions, like asthma, diabetes, cancer, and so many other problems.

And perhaps most cruelly of all, if Donald Trump has his way, the complications from COVID-19, which are well beyond what they should be.

The Democrats have been boosted by record-setting donations since Ginsburg’s death. ActBlue, which raises funds from small, grassroots donors, reported $91.4 million pledged from 1.5 million donors in the 28 hours after 8 pm on Friday.

ActBlue’s previous record was $41.6 million in one day.

If I win this election, President Trump’s nominee should be withdrawn and, as the new president, I should be the one to nominate Justice Ginsburg’s successor. We can’t keep rewriting history, scrambling norms, and ignoring our cherished system of checks and balances.

Sen. Lisa Murkowski of Alaska was the first Republican senator to break from the Trump-McConnell effort, saying she would not support a confirmation before the election.

McConnell needs to hold 50 of 53 GOP senators to secure the new justice. But some Republicans in difficult re-election battles may be wary — Susan Collins of Maine, trailing in her race, has already said that a justice should not be confirmed before November 3. Sen. Mitt Romney of Utah, who has challenged Trump’s actions and been repeatedly insulted by Trump, is another possible defector.

Retiring Sen. Lamar Alexander of Tennessee said he would back the rushed confirmation. However, the Trump camp scrambled on Sunday to explain the double standard: in 2016 Republicans blocked the Obama Administration for 11 months, as it sought Judge Merrick Garland’s replacement of the late Justice Antonin Scalia.

Playing golf on Sunday, Trump made no comment on Twitter, leaving the task to Republican legislators. Challenged by NBC interviewer Chuck Todd, Sen. John Barrasso of Wyoming even tried to make up a “Biden Rule” to justify his objections to a Justice Garland in 2016 but his embrace of a new justice in 2020.

Todd replied, “There is no Biden Rule.”

Meanwhile, Biden appealed to the handful of Republican senators needed to check the rushed confirmation.

Please, follow your conscience. Don’t vote to confirm anyone nominated under the circumstances President Trump and Senator McConnell have created. Don’t go there. Uphold your constitutional duty, your conscience. Let the people speak. Cool the flames that have been engulfing our country. We can’t keep rewriting history, scrambling norms, ignoring our cherished system of checks and balances.