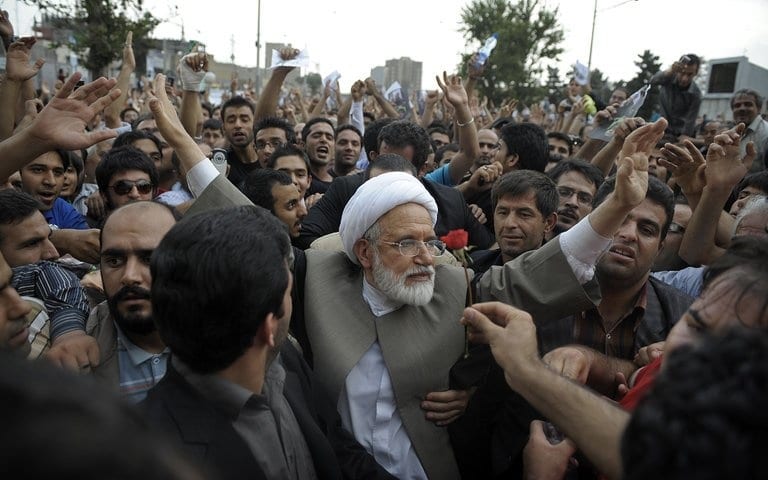 Mehdi Karroubi, one of the detained leaders of Iran’s Green Movement, has criticized the regime’s repression of mass protests over rising petrol prices.

Karroubi was put under strict house arrest in February 2011 along with Mir Hossein Mousavi — the leading challenger in the disputed 2009 Presidential election “won” by Mahmoud Ahmadinejad — and Mousavi’s wife, the academic, artist, and activist Zahra Rahnavard.

Karroubi, 81, defied claims by Revolutionary Guards commander Maj. Gen. Hossein Salami that the demonstrations, sparked by a Government announcement on November 15 raising petrol costs by 50% to 200%, were a “war” and an international conspiracy against Iran.

The cleric cited the “indescribable violence” against demonstrators backed by Salami’s rhetoric:

Another member of this suppressive military body calls the days-long suppression of the defenseless men and women of this country a victory in a world war, and nobody stops these people from uttering such stupid words, which will only increase the anger and hatred of the people.

At least 143 people have been killed since the Government’s announcement, according to Amnesty International, who fears the full toll is far higher. Many of the victims were shot at close range by security forces. Some were shot in the back as they ran away. Bodies have not been returned to families, who have been threatened with arrest if they speak to the media.

More than 7,000 people have reportedly been arrested amid the cut-off of the Internet, as Iranian officials said scores of banks and Government buildings were burnt.

On Wednesday the Supreme Leader proclaimed, to Basij paramilitary troops, “The Iranian nation quashed the enemy’s movement with its magnificent display.”

Karroubi, a former Parliament Speaker and 2009 Presidential candidate, was prominent in the mass rallies after the disputed election. He, Mousavi, and Rahnavard were put under house arrest almost nine years ago as the regime feared the resurgence of demonstrations.

The cleric cited images and videos of security forces killing protesters as he called for an “independent truth-finding committee to explain the various dimensions of this catastrophe”. He said the committee should “identify and punish” both those who shot protesters and those who destroyed public property.

Karroubi knocked back the insistence of the Supreme Leader and high-level officials that the protests were instigated by foreign actors, saying they arose from anger over corruption, discrimination, and inequality.