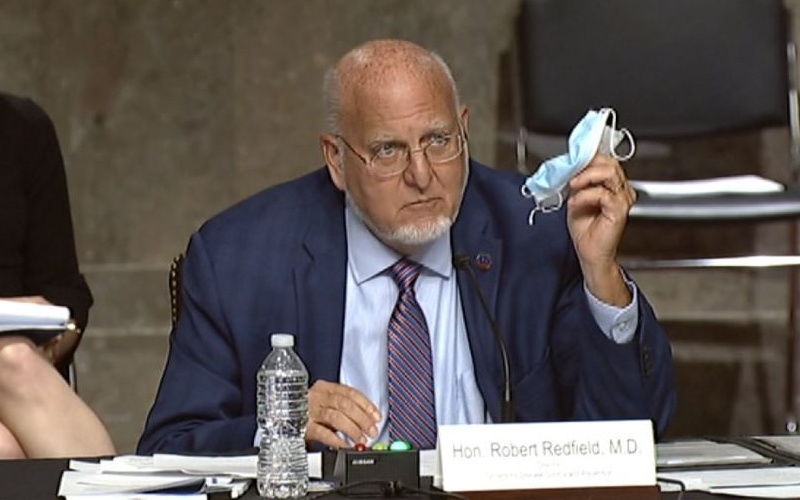 Trump lashes out that the experts made a “mistake”. However, two of his political appointees leave the Department of Health and Human Services, one after accusing scientists of “sedition” as part of a “Deep State” and the other after trying to block and alter the Coronavirus reports of the Centers for Disease Control and Prevention.

CDC head Robert Redfield, whose agency’s guidance has been buried and changed by the White House to fit Trump’s political lines and re-election campaign, found some space for his assessments in a Senate committee hearing.

Less than 24 hours after Trump undermined guidance on wearing masks in public, Redfield said, “I might even go so far as to say that this face mask is more guaranteed to protect me against Covid than when I take a Covid vaccine.”

He explained that some Americans may not get an immune response from the vaccine, while face masks limit the risk of contracting the virus for everyone.

The CDC director poured cold water on Trump’s repeated declarations that a vaccine will be available before the November 3 elections. Echoing the Government’s top Coronavirus expert Dr. Anthony Fauci, he projected that the vaccine will not be “generally available to the American public” until mid to late 2021.

If you’re asking me when is it going to be generally available to the American public so we can begin to take advantage of vaccine to get back to our regular life, I think we’re probably looking at third — late second quarter, third quarter 2021.

JUST IN: CDC Director Robert Redfield says at a Senate hearing he sees a #Covid19 vaccine being "generally available to the American public" in the "late second quarter, third quarter 2021" pic.twitter.com/8w2904TGhN

Trump snapped to reporters in the afternoon, “I think he made a mistake when he said that.”

Trump added — ironically, given his track record on Coronavirus statements — “It’s just incorrect information.” He insisted that a vaccine will go “to the general public immediately”: “Under no circumstance will it be as late as the doctor said.”

But even as he was speaking, the White House was having to acknowledge that another staff have tested positive for the virus.

McEnany also dodged questioned about Trump’s purported health care plan, which he has promised for more than a year and had said would be unveiled in August.

"I'm not going to give you a readout of what our health care plan looks like and who's working on it. if you want to know, come work here at the White House" — Kayleigh McEnany pic.twitter.com/wjGyKalfX0

Democratic Presidential nominee Joe Biden was briefed on Wednesday by public health experts about the safe and equitable distribution of a vaccine.

In a speech in Delaware, he echoed Redfield’s comments on the availability of the vaccine and cautioned, “We’re heading into a very dangerous autumn.” He urged Americans to wear masks to limit the risk of the spread of the virus.

Following up on the briefing by the experts, the former Vice President said:

Scientific breakthroughs don’t care about calendars any more than the virus does. They certainly don’t adhere to election cycles. And their timing and their approval and their distribution should never, ever be distorted by political considerations. It should be determined by science and safety alone.

Biden chided the “lack of seriousness” in Trump’s comments, including in the Tuesday night town hall meeting: “President Trump has refused once again to take responsibility or to take action.”

The nominee, who has his own town hall meeting on Thursday, noted Trump’s “lies and empty promises” as well as his “weak and feckless inaction”.

Biden summarized, noting Trump’s dismissal and discrediting of the experts: “I trust vaccines. I trust the scientists. But I don’t trust Donald Trump. At this point the American people can’t either.”

Trump’s efforts to control the medical and public health experts were dealt a blow with the double departure from the Department of Health and Human Services.

Michael Caputo, the Assistant Secretary for Public Affairs, bowed to pressure after his Sunday Facebook video rant alleging a plot between Democrats, the media, and “deep state” scientists to prevent Trump’s re-election.

HHS said in a statement that Caputo, who also claimed “left-wing hit squads” would take over American streets and urged followers to stock up on ammunition, is taking a 60-day leave of absence to “focus on his health and the well-being of his family”.

After Caputo’s appointment in April, Alexander demanded the CDC rewrite and halt its reports on the scale and mortality of Coronavirus, claiming they were “hit pieces on the administration”.

The reports must be read by someone outside of CDC like myself, and we cannot allow the reporting to go on as it has been, for it is outrageous. It’s lunacy.

Nothing to go out unless I read and agree with the findings how they, CDC, wrote it and I tweak it to ensure it is fair and balanced and complete.