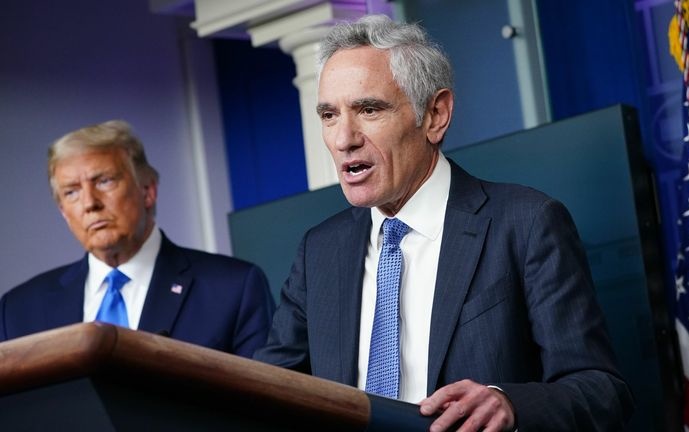 Dr. Anthony Fauci, the US Government’s top Coronavirus expert, implicitly challenges Donald Trump’s actions and false claims by saying that Trump is getting “incorrect information” on the pandemic.

Fauci blamed the deadly misinformation on the neuroradiologist and Fox TV commentator Scott Atlas, who has become Trump’s go-to confidante — and echo chamber for Trump’s views — on the virus, as the “outlier”.

Since May, Trump has pushed aside Fauci and White House Coronavirus Task Force Coordinator Dr. Deborah. He and his political appointees, from economic advisor Peter Navarro to spokesman at Health and Human Services, have derided Centers for Disease Control Director Dr. Robert Redfield and insulted Fauci. They have buried or altered CDC guidance on the crisis.

Fauci has persisted, despite White House barriers to his public interviews, with assessments via Congressional testimony, webcasts, and discussions with foreign outlets. But Birx is reportedly “distressed” over Trump’s reliance on Atlas and is considering departure, and Atlas publicly tried to discredit Redfield last week after the CDC Director said up to 90% of the US population remains susceptible to the virus — echoing Trump’s earlier dismissal of Redfield as “confused” over when a vaccine will be widely available.

Last Friday on a flight from Atlanta to Washington DC, Redfield was overheard criticizing Atlas, who has no experience in epidemiology or public health and hasn’t practiced medicine since 2012: “Everything he says is false.”

.
Asked by CNN if he shares Redfield’s concerns, Fauci replied, “Sometimes things are said that are really taken either out of context or are actually incorrect.”

The doctor said he does not publicly criticize individual but prefers to “come to some sort of resolution” by sitting down in discussion to explain scientific views.

So, I mean, my differences with Dr. Atlas — I’m always willing to sit down and talk with him and see if we can resolve those differences.

He continued, “Most [medical and public health advisors] are working together. I think, you know who the outlier is.”

As US deaths continued at about 800 to 1,000 per day through the summer and cases passed 7 million, Fauci has warned of an even sharper escalation through the autumn and winter. A University of Washington model, highly regarded in the scientific community, projects 410,000 deaths by January 1 if effective measures are not implemented.

But Atlas has reinforced Trump’s demands for a full “reopening” of the US, including of schools and universities. The neuroradiologist has effectively promoted the idea of “herd immunity”, allowing the spread of the virus through the US population, while denying that he has endorsed the term.

Neither Fauci and Birx were present — but Atlas was — at Trump’s White House appearance on Monday, where Trump continued his denial of the pandemic’s threat.

Moments after Vice President Mike Pence cautioned that cases are likely to rise, Trump repeated his declaration that the US is “rounding the corner” on the pandemic.

Fauci emphasized, before Trump’s latest remarks, “You have to try and be out there with a consistent message as often as you possibly can, because there is so much misinformation during this divisive time we’re in.”