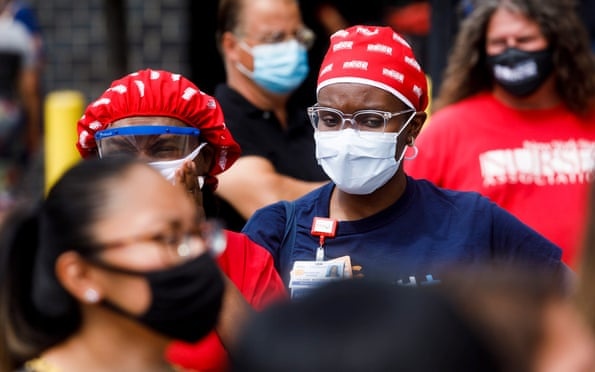 Nurses and doctors at Elmhurst Hospital Center in New York City, at a rally for adequate funding of hospitals during the Coronavirus pandemic (Justin Lane/EPA)

As Donald Trump nominates Amy Coney Barrett for the Supreme Court, another 709 Americans die from Coronavirus.

Hoping to divert attention from the pandemic — and possibly to support his refusal to accept a loss to Joe Biden in the November 3 election — Trump presented the arch-conservative Barrett at the White House on Saturday. In an unprecedented rush, he and Senate Majority Mitch McConnell are hoping to tilt the Court by Election Day, replacing the moderate Ruth Bader Ginsburg who died on September 18.

Medical and public health experts, sidelined by Trump’s denial of the virus, added more warnings about the resurgence of the world-leading death toll.

Dr. Chris Murray, director of the University of Washington’s Institute for Health Metrics and Evaluation, said:

First, as case counts have come down in some states, we tend to see that people become less careful, they tend to have more contact. But then the most important effect is the seasonality of the virus, that people go indoors, transmission happens more.

The IHME model is projecting more than 410,000 deaths by January 1, with the possibility of 3,000 daily fatalities by late December.

The Institute said the deaths over the next three months can be halved with near-universal mask use in public.

But Trump has denigrated the wearing of masks, notably by his Democratic opponent Biden, and held large rallies with no social distancing measures. He has pushed aside the Government’s leading experts, such as Dr. Anthony Fauci and White House Task Force Coordinator Dr. Deborah Birx, in favor of Fox TV commentator and neuroradiologist Dr. Steve Atlas.

The Institute warns that if “herd immunity” — the strategy effectively endorsed by Trump and Atlas — is pursued, then “the death toll could increase to 620,000” by January 1.

But on Friday, Trump ally Gov. Ron DeSantis of Florida — the state with the highest daily death toll in the US — lifted restrictions on restaurants and bars so they can operate at 100% capacity. He warned local communities not to stand in the way, or to use Coronavirus measures to prevent anyone from working or operating a business.

Trump has repeatedly belittled the experts, including Dr. Fauci, who have warned of the ongoing spread of the virus and called on communities to prepare for “the challenge” of fall and winter.

Earlier this month, Trump derided Fauci, “I inherited him….I don’t agree with him that often.” His political appointees in the Department of Human and Health Services tried to shut down Fauci’s assessment of the risk to juveniles.

On Wednesday, Center for Diseases Control and Prevention Director Robert Redfield told a Congressional hearing of the need to wear masks to contain the virus with “more than 90% of the population remain[ing] susceptible”.

Atlas, who has no experience in epidemiology or public health, immediately rejected the testimony: “I think that Dr. Redfield misstated something.”

Sources told CNN this week that Task Force Coordinator Birx is so “distressed” that she is considering a departure.

One source spoke of Birx’s view that expertise has been set aside by Trump for the support from Atlas and his misleading claims: “The President has found somebody who matches what he wants to believe. There is no doubt that she feels that her role has been diminished.”