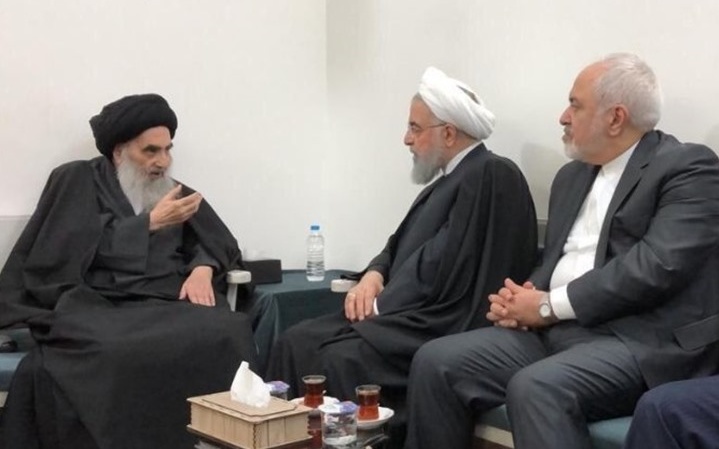 The camp of Iran’s Supreme Leader criticizes one of the leading clerics in Shia Islam, Iraq’s Grand Ayatollah Ali Sistani, but is soon forced into an apology.

The dispute arose over proposed Parliamentary elections in Iraq, a central demands of protesters who have demonstrated for months against economic conditions, poor governance and failure over public services, and corruption.

Based in the holy city of Najaf, Grand Ayatollah Sistani expressed support for the elections in a meeting last Tuesday with with the UN Secretary General’s Special Representative for Iraq, Jeanine Hennis-Plasschaert.

“The parliamentary elections scheduled for next year are of great importance,” Sistani pronnounced. He said failure to hold the ballot and conduct them freely and fairly would “threaten the unity and future of Iraq’s people.”

But the Grand Ayatollah raised concerns for the Iranian regime with his suggestion that the UN should monitor the vote.

The Supreme Leader’s appointed editor of the daily Kayhan, Hossein Shariatmadari, chided Sistani for failing to know of some important “secrets”. He continued:

Inviting the United Nations to monitor a country’s elections is tantamount to declaring a country’s bankruptcy. It is a pessimistic view towards the nation and an optimistic approach towards foreigners.

The editor gave space for a Sistani retreat by suggesting that a “misunderstanding” may have occurred in the minutes of the meeting with the UN’s Hennis-Plasschaert and that the transcript should be “corrected”.

“I Hope He Will Accept My Apology”

But before Sistani’s office publicly responded, the Supreme Leader’s camp climbed down.

Shariatmadari asked for forgiveness from the Grand Ayatollah, declaring Sistani’s endorsement of the UN role in elections had been erroneously reported: “My interpretation from His Holiness’ remarks did not correspond to what he really said, and I apologize from Him for that and I hope He will accept my apology.”

However, Shariatmadari then pointed to a regime retreat, indicated that Sistani is supporting cooperation with the UN and splitting hairs over the issue:

My interpretation of his statements was that he had called for direct UN monitoring of Iraq’s upcoming elections….[He meant] serious supervision in coordination with relevant section in the UN board.

The statement by Ayatollah Sistani’s Office does not refer to UN supervision of elections; rather it speaks of coordination of observance with UN rules, meaning that observation is conducted solely by Iraqis.

However, the characteristics of the observers, as well as the rules applied in holding the elections should correspond to the UN rules, so that there will be no room for any objection from some relevant groups to the validity of the elections.