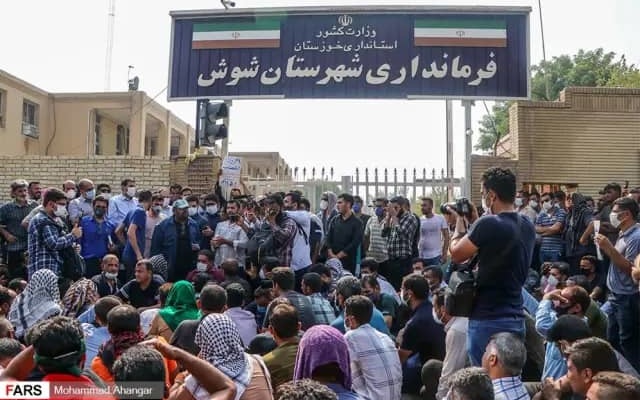 In the latest episode of labor unrest in Iran, workers at oil refineries and petrochemical plants are on strike in the south of the country.

The semi-official Iranian Labour News Agency reported that employees of the Qeshm Heavy Oil Refinery Company, operating on Qeshm Island in the Persian Gulf, walked out on Sunday. They protested that they have not been paid regularly for months.

A refinery manager denied that the workers, employed through third-party contractors, have not been paid. He said the strike was over wage levels.

The Center for Human Rights in Iran says workers at other plants in Iran’s oil refining, petrochemicals, and drilling industries have been on strike since last Friday. The site notes that Haft Tappeh sugar mill workers, who have recurrently protested for years, have been demonstrating since June 13 over unpaid wages.

ILNA also reported a demonstration since Sunday of about 200 workers at the Heavy Equipment Production in Arak in central Iran.

Unconfirmed reports on social networks and from unofficial trade unions claim strikes have spread to refineries and petrochemical companies in Khuzestan, Bushehr, Hormozgan, and Fars Provinces.

Iran’s regime does not recognize independent unions. Prominent labor activists have been imprisoned for years.

With serious difficulties over production, investment, trade, employment, and currency, there have been periodic mass protests across Iran over economic conditions. Last November, security forces killed at least 304 people amid four days of demonstrations sparked by a sudden 50% to 200% rise in petrol prices.