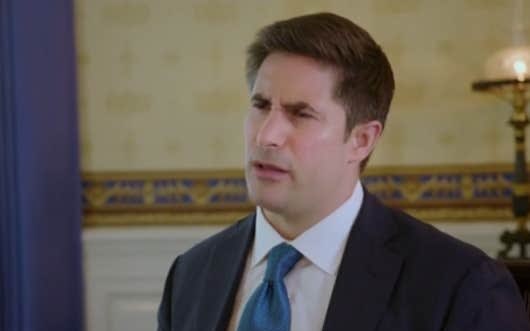 Jonathan Swan of Axios listens to Donald Trump in the White House, August 2020

I joined Monocle 24, the BBC, and talkRADIO to discuss both the tragedy and the inadvertent black comedy of Donald Trump’s chat with Axios’ Jonathan Swan.

Speaking with Monocle 24’s Georgina Godwin on Wednesday morning, I explain how Swan exposed Trump’s lack of knowledge and narcissism — and then how Trump exposed his deadly self-deception over Coronavirus.

I closed my eyes and thought I was listening to an episode of Armando Ianucci’s Veep. Then I open them and this is the reality — the leader of a country with more than 156,000 deaths and almost 5 million cases from Coronavirus, floundering over pages with brightly-colored charts and desperately seeking something for his position that “everything’s going really well”.

In a Tuesday night chat with Times Radio’s Phil Williams, we consider if the interview will damage Trump with his diehard supporters, three months before November’s elections, and then the more serious issue of an ongoing pandemic.

Trump might succeed when the economy’s good and you can have a bit of spectacle. But when you need leadership and responsibility as Coronavirus kills, and doesn’t distinguish between Republican and Democrat, then Trump doesn’t fit the bill for competence….

But this is beyond Trump and whether he retains the White House. When it’s my relatives who are threatened, Trump’s ego is secondary in my consideration.

And with talkRADIO’s Julia Hartley-Brewer on Wednesday, the question is, “Does Trump really believe what he’s saying?”

Have you ever had a friend whose kids are running amok, whose dog has ripped up the sofa, and whose house is on fire — but still looks at you and says, “Everything’s fine”?

Donald Trump, wanting re-election and with a big ego, is that friend.