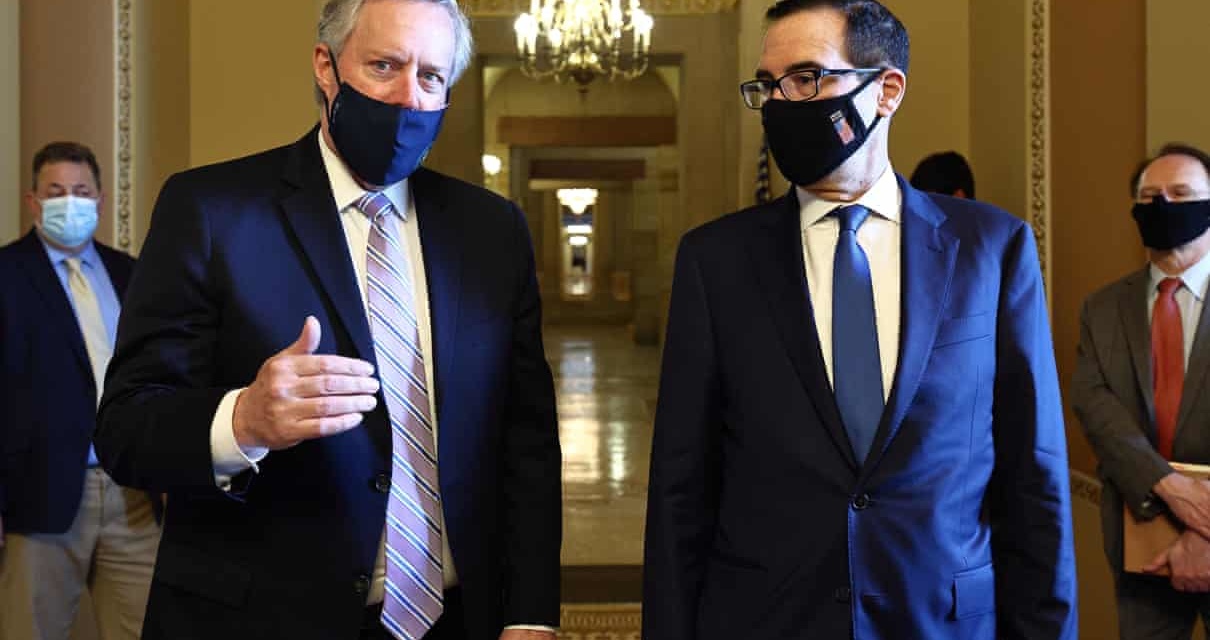 Weekly unemployment benefit of $600 per week expires for tens of millions of Americans who lost jobs because of the Coronavirus pandemic.

The benefit expired at midnight after legislators failed to agree on a new Coronavirus relief package. Republican Senators and the White House proposed a reduction to $200/week in a $1 trillion bill. House Democrats, who have passed a $3 trillion measure, want to extend the $600/week through the end of the year.

About 54 million Americans, including 1.4 million last week, have filed unemployment applications since mid-March. More than 30 million are on benefits. Almost 11% of Americans say they are in households where there is not enough to eat.

Donald Trump said nothing about the development, a day after confirmation of a 9.5% contraction in US GDP — at an annual rate of 32.9% — between April and June. Instead, he
preferred a photo opportunity with Florida sheriffs where he renewed his threat to crush Black Lives Matters marches.

House Speaker Nancy Pelosi issued an appeal for action, saying Administration officials “do not understand the gravity of the situation”. She rejected a last-minute Republican pitch to extend the benefit for one week.

Trump’s top economic advisor Kudlow said last weekend that the reduced benefit is “quite generous by any standard”. He proclaimed, in defiance of the GDP drop and the growing unemployment figure, that the economy is “going north” rather than “going south”.

Appearing at a House committee hearing, the Government’s top Coronavirus expert Dr. Anthony Fauci implicitly blamed the ongoing surge on Trump’s demand this spring — in pursuit of his re-election — for a quick “reopening” of the US.

Dr. Fauci explains why the U.S. has continued to see a surge in cases while European countries have seen a sharp decrease.

He says most European countries shut their economy by 95%, while functionally the U.S. only shut its economy down by 50%.https://t.co/pYCjQK5bri pic.twitter.com/IJdQ2Q1zKE

Fauci said he believes, “We can still turn this around.” He cautiously suggested that a vaccine might be confirmed by the end of 2020.

However, there was no sign from Administration officials of a plan to get on top of the virus’s resurgence, with rates rising in all but five states throughout July.

Adm. Brett Giroir, the Health and Human Services official overseeing virus testing, tried to respond to a report that “testing is once again becoming a critical weakness in the America’s response to the Coronavirus pandemic”, with people often waiting for results for more than a week and sometimes up to two weeks.

Giroir acknowledged that return of all coronavirus tests between 48 and 72 hours, critical in containing the spread of the virus, “is not a possible benchmark we can achieve today, given the demand and the supply”. He insisted that the target is “absolutely” achievable in the future, with half of all test results processed within 24 hours.

Some Republicans ignored those issues, preferring to attack on behalf of Trump. Rep. Jim Jordan tried to blame anti-racism marches for the virus spike. Fauci listened with a bemused look on his face, and refused to rise to Jordan’s baiting.

Jordan’s attack unwittingly backed up the point of Democrat Rep. Nydia Velázquez to Fauci that “it does not matter what you say if it’s undermined by the President of the United States”.

Trump and his inner circle, upset that Fauci’s assessment of the US is “still in the first wave” of the virus threatens their “reopening” campaign strategy, have waged a weeks-long campaign to belittle and undermine his authority.

But Fauci was not deterred in telling the committee of the failure by the Federal Government to coordinate an effective response:

Fauci indirectly criticizes the federal government's coronavirus response: "I think there was such a diversity of response in this country from different states, that we did not have a unified bringing everything down." pic.twitter.com/augiqJnhKX