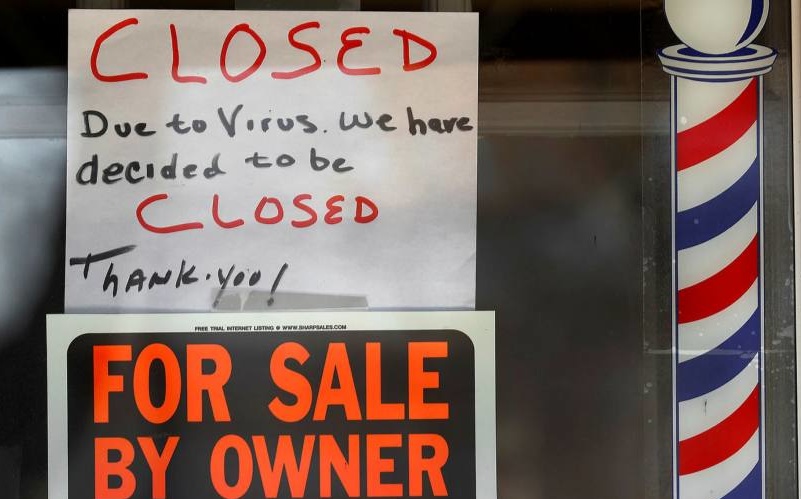 US Gross Domestic Product falls 9.5% between April and June, its sharpest drop since records began.

The drop, the equivalent of a 32.9% annual decline, wiped out almost five years of growth dating back to the recovery under the Obama Administration. The decline would have been even more dramatic had it not been for trillions of dollars in Federal aid to businesses and households amid the Coronavirus pandemic.

Donald Trump, who has based his political reputation and a second term on “#Winning” with economic growth, said nothing about the news. Instead, 15 minutes after the figures were announced, he issued a Twitter threat to delay November’s election, based on his falsehood that mail-in voting is fraudulent.

Trump repeated the lie throughout the rest of the day. He falsely proclaimed that “256 miles” of his Wall with Mexico — in fact, almost all of the construction is enhancement of existing fencing — and insisted, “We are going to WIN the 2020 Election, BIG!”

See Can Trump Campaign Save Itself By November 3?
EA on BBC: Trump’s Threat v. November’s US Elections

The economic news came as US deaths reached 152,070, an increase of 1,357 in 24 hours. The increase was the second-largest since mid-May, after Wednesday’s 1,457 fatalities, and the eighth straight weekday with more than 1,000 deaths.

Among Thursday’s victims was Herman Cain, a Republican candidate for President in 2012 and an early supporter of Trump’s 2016 campaign. He died after a month-long battle, showing symptoms soon after attending Trump’s ill-fated campaign rally in Tulsa, Oklahoma on June 23.

“We Did Not Get The Virus Under Control”

The historic drop follows an attempt by Trump and his inner circle, include some State Governors, to quickly “reopen” the US in defiance of medical and public health advice.

The lifting of restriction on businesses, restaurants and bars, beaches, and other public spaces from the start of May provided a brief bounceback in economic activity. But that has been dismantled by the resurgence of Coronavirus, with record-setting increases in daily cases and rising rates in all but a few states.

Federal assistance, including unemployment benefit of $600/week for tens of millions of Americans, is set to expire on Friday. Senate Republicans have proposed a 67% reduction in benefit to $200/week in a $1 trillion Coronavirus package; House Democrats want the $600/week extended to the end of the year in a $3 trillion stimulus bill.

About 53 million Americans have filed unemployment applications since mid-March, and about 30 million people are receiving benefits.

More than 1.4 million Americans put in new claims last week, the 19th straight week with more than 1 million. A further 830,000 people filed for benefits under the federal Pandemic Unemployment Assistance program, which supports freelance workers, the self-employed, and others not covered by traditional benefits.

“Not only have we plateaued, but we may be losing ground,” says Diane Swonk, chief economist at the accounting firm Grant Thornton. “To have these kinds of numbers in July when many in Congress hoped this would be over by summer underscores how unique and persistent the Covid crisis is.”

In another world, a sharp drop in activity would have been just a good, necessary blip while we addressed the virus. From where we sit in July, we know that this wasn’t just a short-term blip. We did not get the virus under control.

As Trump tried his postpone-the-election diversion, Fox News tries a complementary tactic: its homepage makes no reference at all to the GDP fall.

Instead, it headlines, “No Backing Down: Trump defends tweet on possible Election Day delay at heated White House news conference.”

House Minority Leader Rep. Kevin McCarthy, normally a staunch Trump advocate, said, “Never in the history of the federal elections have we not held an election, and we should go forward,” even as he said he understood “the President’s concern about mail-in voting.

Sen. Ted Cruz gave token cover for Trump’s barrage, “I think election fraud is a serious problem.” However, he continued, “But, no, we should not delay the election.”

“People close to Mr. Trump” said he has discussed with associates whether the election can be delayed, but has been told definitively that only a Constitutional amendment could alter the November 3 date.

Rep. Liz Cheney, the third-ranking Republican in the House, emphasized: “We are not moving the date of the election. The resistance to this idea among Republicans is overwhelming.”