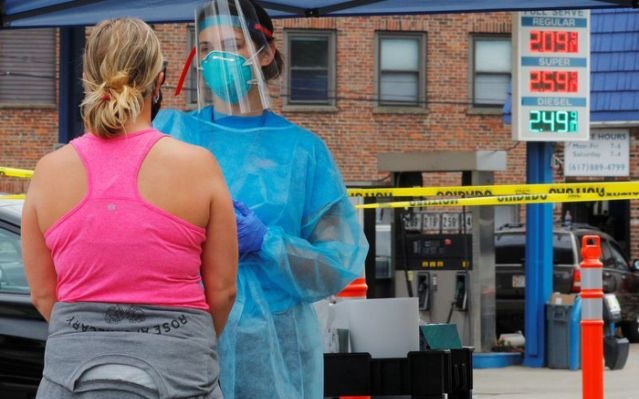 Appearing at his New Jersey golf club on Saturday, Trump declared a benefit of $400/week, a 33% slash of the $600/week which expired more than a week ago because of his refusal of the relief package. He also claimed, with some exaggeration, a moratorium on evictions from federal housing and help for student borrowers.

He also threatened a halt to funding of Social Security with a suspension of payroll tax from July 1 to the end of the year — a measure repeatedly opposed by Republican as well as Democratic legislators.

Legal experts immediately said the orders violate the US Constitution, as only Congress has tax and expenditure authority.

Trump’s chief economic advisor Larry Kudlow said on Monday, “We have got to fix and extend the unemployment issue right now….I don’t think that can be done administratively. I think that requires an act of Congress.”

But the orders were foreshadowed by White House Chief of Staff Mark Meadows on Friday, after he and Treasury Secretary Steven Mnuchin rejected a $2 trillion compromise, presented by House Speaker Nancy Pelosi and Senate Minority Leader Chuck Schumer, which protected the $600/week to the end of the year.

The compromise also retained some funds for states and cities whose budgets have been ravaged by the response to the pandemic. It provided some funding for the US Postal Service, helping provide election security for mail-in voting.

Trump’s declarations, delivered to golf club members who applauded their host and chided reporters, maintained his refusal to help states who — in the absence of a coordinated effort by the Federal Government — have borne the burden of dealing with the outbreak.

With the refusal to accept the $3 trillion HEROES Act adopted by the House in May, assistance to small businesses expired this weekend. Billions of dollars will not be allocated to schools, even as they face Trump’s demand, in defiance of medical and public health advice, to reopen fully for in-class instruction. A second round of $1,200 stimulus checks is suspended.

But Trump, seeking re-election and trailing Democratic nominee Joe Biden, used the show of the orders to assail Pelosi and Schumer.

The Democratic leaders responded in a statement:

We’re disappointed that instead of putting in the work to solve Americans’ problems, the President instead chose to stay on his luxury golf course to announce unworkable, weak, and narrow policy announcements to slash the unemployment benefits that millions desperately need and endanger seniors’ Social Security and Medicare.”

They called on Republicans to “return to the table” and “meet us halfway” in negotiations.

Trying to circumvent the Constitutional provisions on tax and funding authority, the White House invoked the Stafford Act, a federal disaster relief statute, to divert money from a Homeland Security Fund. In effective, disaster relief will be used for Trump’s proclaimed $400/week in unemployment benefits.

The White House did not explain how much of the supposed $400/week, and for how many Americans, could be covered by the diversion.

Instead, Trump also commanded that states pay the first $100/week, and the order says assistance can only be given to those who first qualify for the $100. That puts the administrative burden on states to implement the new system, allowing Trump to blame them if the measure does not materialize.

“If they don’t, they don’t — that’s going to be their problem,” Trump said.

The supposed moratorium on evictions does not revive the provision in the $2.2 trillion stimulus law passed in March. Instead, it just says that federal policy is to minimize evictions, declaring that officials should identify statutory ways to help homeowners and renters.

Saturday’s political maneuver was more about the theater than the substance of the orders, with Trump trying to shift blame for mismanagement and negligence of the pandemic onto Democrats.

But the spectacle unraveled. Trump again threatened to undermine November’s election by repeating his lie that mail-in voting is fraudulent. He proclaimed, as Coronavirus surges across the US, “We’re doing very good with the numbers”, and implicitly his medical advisors’ recommendations for stay-at-home measures by declaring — with no evidence — that they increase suicides. To the laughter of the members, the thrice-married Trump said the steps to contain the virus also ruin marriages.

He was finally undone by the inquiry from CBS’s Paula Reid about why he continually took credit for Veterans Choice legislation which was implemented by the Obama Administration in 2014. He abruptly ended the appearance and marched off as the Village People’s “YMCA” played.

Trump gets frustrated when @PaulaReidCBS won't stop trying to ask him a question about why he keeps lying about Veterans Choice, then abruptly ends the news conference as "YMCA" plays pic.twitter.com/Z3uVxebKGH