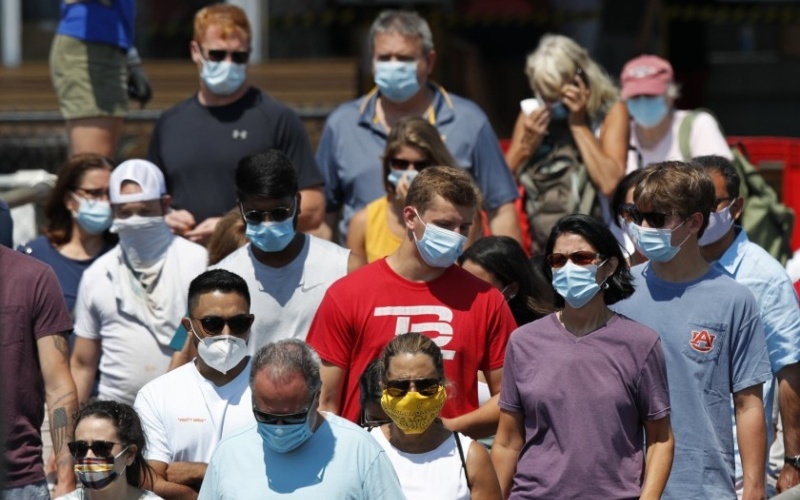 As the Coronavirus surge continues across the US, Donald Trump proclaims, “We’re doing better.”

Reading from a script, Trump insisted, “We’re beginning to see evidence of significant progress. Nationwide, the number of positive cases has declined by nearly 6% from the week before, and the positive test rate has dropped from 8.7% to 8%….Very encouraging.”

Trump did not mention that the “decline” is relative to the record 1.87 million cases across the US in July, with a daily record of almost 80,000 cases and the highest weekly totals for infections and deaths in many states, especially in the South and West.

Florida, Mississippi, and Alabama continue to lead the surge, but Missouri, Montana and Oklahoma were among states with the largest percentage surge of infections over the past week.

Florida set the fourth-highest daily total in the world for new cases last month, behind only the US, Brazil, and India. Trump proclaimed yesterday that Gov. Ron DeSantis, a dedicated ally, is “doing a great job”.

Trump is right that countries lauded for their pandemic responses are now seeing resurgences. But here's what Germany's resurgence looks like so far: 955 new cases on Friday, seven new deaths. The US had 67,023 new cases and 1,259 new deaths.

Trump issued his declaration as he responded to a suggestion by a Federal Reserve official who said a nationwide lockdown for a month or more might be needed to check the virus.

“It’s important for all Americans to understand that a permanent lockdown is not a viable path towards producing the result that you want,” Trump said.

He repeated his demand, backed up by the threat of a cut in Federal funding to states and schools, for full in-class instruction from this month.

And having promised two weeks ago that he would deliver a comprehensive health care plan by Monday, he announced an executive order for Medicare to cover “telehealth” visits.

On July 1st, Donald Trump predicted the coronavirus was going to "just disappear."

He was wrong — and more than 25,000 Americans died due to the virus last month.

Mr. President, step up and do your job before even more American families feel the pain of losing a loved one.

Trump also issued a garbled statement about Dr. Elizabeth Birx, the White House Coronavirus coordinator, after assailing her as “Pathetic!” earlier in the day.

In contrast to Trump’s campaign trying to undermine the White House’s top infectious diseases expert, Dr. Anthony Fauci, Birx has avoided Trump’s wrath, often by propping up or excusing his lack of knowledge and disinformation.

But on Sunday, she dared tell CNN of an outbreak which has moved out of cities across all parts of the US: “What we are seeing today is different from March and April. It is extraordinarily widespread. So everybody who lives in a rural area, you are not immune.”

Birx did not rule out a death toll of 300,000 by the end of 2020 and implicitly challenged Trump’s insistence that all schools fully open by suggesting that some could offer only distance learning.

A senior administration official said Trump was angered that Birx did not mention states allegedly doing well and that she had praise for House Speaker Nancy Pelosi, despite Pelosi’s statement on Sunday that Birx was acting more as a political appointee than as an expert advisor.

Trump tweeted on Monday morning, with an insult of Pelosi and his racial slur for Coronavirus:

So Crazy Nancy Pelosi said horrible things about Dr. Deborah Birx, going after her because she was too positive on the very good job we are doing on combatting the China Virus, including Vaccines & Therapeutics. In order to counter Nancy, Deborah took the bait & hit us. Pathetic!

Asked about Birx “taking the bait”, Trump launched a lengthy ramble, initially diverting with assertions about “other countries have problems” and then saying:

I told Dr. Birx, I think we’re doing very well. She was in my office a little while ago. She’s a person I have a lot of respect for. I think Nancy Pelosi’s treated her very badly, very, very badly, very nasty. I’m just referring to the fact that I thought that really they should say the job we’ve done, whether it’s on ventilators or testing,

Dr. Fauci supported Birx’s assessment of a “new phase” of the pandemic, “When you have community spread, it’s much more difficult to get your arms around that and contain it.”

Fauci pushed back on Trump’s demand for full school reopening. He said that while the “default principle” should be for children to return, the insistence that “every child has to go back to school is not really realizing the fact that we have such a diversity of viral activity”.

Democratic Presidential nominee Joe Biden gave support to all the medical and public health specialists belittled by Trump and his inner circle: “It’s hard to believe this has to be said, but if I’m elected president, I’ll spend my Monday mornings working with our nation’s top experts to control this virus — not insulting them on Twitter.

No Progress on Relief Package With Unemployment Benefits

There was no progress towards a Coronavirus relief package on Monday, after the expiry of unemployment benefits for more than 20 million Americans put out of work by the pandemic.

White House officials met with legislators for the fifth time in eight days, in the office of House Speaker Nancy Pelosi.

But Republican Senators refused to budge on their cut of benefits from $600/week to $200/week in their $1 trillion proposal. House Democrats, who have already passed the $3 trillion HEROES Act, want the full benefit extended to the end of 2020.

Trump snapped at the Democrats, “All they’re really interested in is bailout money to bail out radical left governors and radical left mayors like in Portland and places that are so badly run — Chicago, New York City.”

Democrats are proposed more than $900 billion to states and cities whose budgets have been devastated by the outbreak and nationwide recession.

US GDP fell 9.5% from April to June, a historic fall at a 32.9% annual rate. More than 54 million Americans have filed unemployment applications since mid-March.