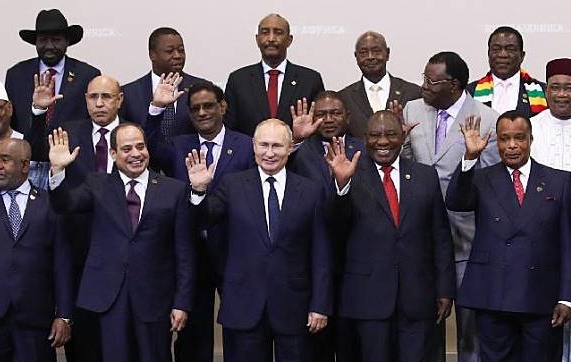 In October last year, African leaders descended on Sochi, Russia, for the first ever Russia-Africa Summit.

At the gathering, Russian chemical manufacturer UralChem signed a deal, worth more than $1.1 billion, to build a complex for the production of fertilizers in Angola. The company, working closely with Russian State agencies, has been expanding their presence in countries such as Kenya and Angola over the last five years.

UralChem is just one player in Russia’s larger game of re-engagement across Africa: the summit facilitated deals worth $12.5 billion for the Kremlin.

Since 2014, Russia’s approach towards Africa has brought the continent to the center of Moscow’s foreign policy, complementing — and sometimes offsetting loss of — influence across the Middle East, Europe, and the Americas. Vladimir Putin is committed to the use of the power of the Russian state, and of private financial allies, for military, economic, and political ties.

Moscow’s renewed attention to Africa is reminiscent of Soviet policy after 1945. Amid decolonization, the Soviets pursued economic deals, cushioned by political and educational ties, from Tunisia to Ghana.

The close relationship fizzled out following the collapse of the Soviet Union. But it has not been forgotten. The State-funded Russian International Affairs Council trumpeted this year, “The continent still remembers the large-scale support it received from the Soviet Union.”

The shift from memory to re-engagement has been a reaction to challenges to Russia influence elsewhere. By 2012, Putin’s relations with the US and Europe had soured. Russia’s annexation of Crimea in 2014, following the removal of Ukraine’s pro-Russian President Viktor Yanukovych by mass protests, elevated the confrontation.

In an article published in 2014 by State-sponsored think tank Valdai Club, Putin promised adjustments for foreign objectives which are “strategic in nature”. Moscow’s focus on Africa sought new global partners who still hold “goodwill toward Russia”.

This makes the reactive nature of Russia’s re-engagement clear. Unable to develop strategic political and economic ties with old allies, Africa presents itself as an opportunity for global expansion.

The Kremlin’s Africa strategy has been propelled by the rapid growth of arms deals with countries such as Angola, the Central African Republic, and Libya. State projects and State-supported mercenaries, such as the Wagner Group, have extended the agreements to make Moscow the world’s biggest arms supplier to the continent.

Putin and other officials, such as Foreign Minister Sergey Lavrov, have paid regular visits. Political ties were cemented at the Russia-Africa Summit, with 42 heads of state in attendance.

Russia has invested heavily in African energy and resources. In Angola, Alrosa now owns 41% of Catoca Limited, the country’s biggest diamond mine. Russian oil and gas companies have a large presence in North Africa and in countries such as Mozambique.

The investment has taken on added importance with complications for the Kremlin in the Middle East. Massive military intervention from September 2015 has prevented the fall of Bashar al-Assad in power amid Syria’s uprising; however, it has been expensive with no prospect of reconstruction, competition for control of resources, and Moscow’s concern over regime corruption.

Russia tried to flex its muscle with support of the Libyan insurgency of Gen. Khalifa Haftar, providing arms, equipment, and personnel. The effort has been checked by Haftar’s loss of territory and bases to Government forces, but Putin has also invested heavily in the Horn of Africa, once a close ally of the Soviet Union. Earlier this year, Russia completed plans to set up a military base in Berbera on the coast of Somaliland, a self-declared state in Somalia.

But a virus rather than arms deals may be key to Russian success. As the COVID-19 pandemic moves through Africa, Russia has sent medical supplies to countries such as the Democratic Republic of Congo, Djibouti, and Algeria.

These recent investments have not only confirmed Russia’s commitment but offer a counter to China and the US as they are diverted by a trade war and increased political sniping.

Face-to-face diplomacy is yet to commence, but Russia is rumbling ahead with its plans in Africa. Two weeks ago, Russian Foreign Minister Lavrov held a video conference with his counterparts in South Africa, Egypt, and the Democratic Republic of Congo.

The focus of their discussions? A Russia-Africa Summit 2.0.