TrumpWatch, Day 1,294: Coronavirus — Fauci Says “Shame on Us If We’re Not Prepared” 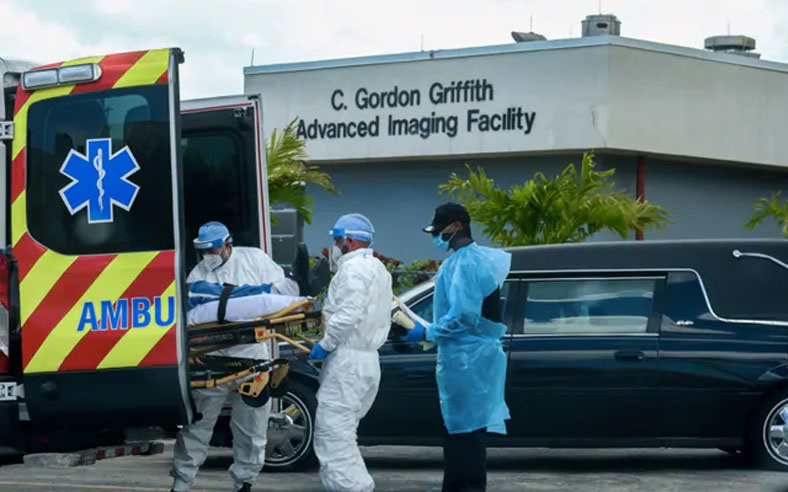 Medics move a Coronavirus patient from an ambulance in Miami, Florida

In his latest challenge to the Trump Administration, the Government’s top infectious disease expert, Dr. Anthony Fauci, chides, “Shame on us if we’re not prepared for the next Coronavirus pandemic outbreak.”

But Donald Trump repeats that the virus “will go away”.

The statements came as the US death toll reached 158,250 on Wednesday. The increase of 1,444 in 24 hours was the second-largest since mid-May.

Speaking at a Harvard University health forum, Fauci said the US must develop a universal vaccine “that has the specificity against all the coronaviruses, so we don’t have to anticipate the next time this happens. That’s the lesson that we’ve learned with influenza, which is why we’re developing a universal influenza vaccine.”

In an interview with Reuters, he projected, “I hope and feel it’s possible that by the time we get through 2021 and go around for another cycle, that we’ll have this under control.”

The doctor effectively swept aside Trump’s dismissal of Coronavirus as a long-term issue: “I don’t think we’re going to eradicate this from the planet…because it’s such a highly transmissible virus that that seems unlikely.”

In fact, after a record-setting surge last month, Arizona now has the second-highest death rate per capita in the US and the eighth-highest total of cases. The state has escaped lightly in the initial outbreak, but was struck hard from early June after Ducey followed Trump’s command to quickly reopen businesses and other public spaces.

Despite a recent tapering of the surge, Arizona’s intensive care units are “severely constrained” with 85% full.

The platform deleted a Trump post spreading the lie, via a video from a Fox TV interview, that children are “almost immune from Covid-19”.

A Facebook spokesperson said, “This video includes false claims that a group of people is immune from Covid-19 which is a violation of our policies around harmful Covid misinformation.”

Twitter also blocked the Trump campaign’s post with the video, and the account was barred from posting new tweets until the false information was removed. The campaign deleted the post on Wednesday night and resumed its tweeting.

While evidence suggests that children generally have milder Coronavirus symptoms than adults, they are not immune. Some juveniles have become severely ill or died.

Trump repeated the false claims in his Wednesday appearance.

Trump dismisses the reality that children can get seriously sick and die from Covid pic.twitter.com/wsox4KE1rS

And Courtney Parella, deputy national press secretary for the Trump campaign, compounded the lie, insisting, “The President was stating a fact that children are less susceptible to the Coronavirus.”

Trump put out the falsehood in pursuit of his demand that all schools provide complete in-class instruction from later this month.

With more than 20 million Americans losing unemployment benefits and Democrats unwilling to accept a GOP proposal cutting the weekly check by 67%, Trump said in the appearance that he could sign an executive order bypassing Congress.

My administration is exploring executive actions to provide protection against eviction…additional relief to those who are unemployed, and a term-limited suspension of the payroll tax.

Only Congress can appropriate Federal Government funds. White House Chief of Staff Mark Meadows is trying to circumvent the Constitutional mandate with the argument that the administration can repurpose funds already authorized by Congress.

But the negotiations are over new money in a Coronavirus relief package. Republicans are proposing the slashing of the weekly benefit from $600/week to $200/week in a $1 trillion measure. House Democrats, who have already passed the $3 trillion HEROES Act, want to extend the $600/week to the end of the year.

Some Senate Republicans said that if there is no agreement by Friday, then they will go on recess and there will be no relief package.

But Senate Majority Leader Mitch McConnell later said that the chamber will convene next week.