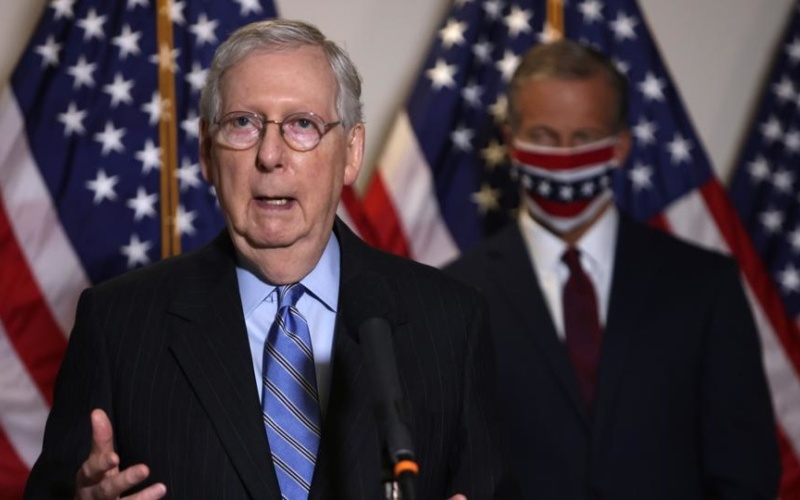 Senate Majority Leader Mitch McConnell signals a Republican retreat over a Coronavirus relief bill with an extension of full unemployment benefits, for more than 20 million Americans who have lost jobs because of the pandemic.

The $600/week benefit expired last Friday after the White House and Republican Senators insisted on a cut to $200/week in a $1 trillion package. House Democrats, who have passed the $3 trillion HEROES Act, want an extension of the $600/week to the end of the year.

Negotiations have also foundered over a Republican priority on exempting businesses from liability over Coronavirus cases, a Democrat provision for almost $1 trillion in aid to states and cities whose budgets have been ravaged by the outbreak and economic downturn, and GOP refusal to accept assistance for the Post Office, amid suspicions that Donald Trump is trying to break it to hinder mail-in voting in November’s elections.

The American people, in the end, need help And wherever this thing settles between the President of the United States and his team that has to sign it into law and the Democrat not-insignificant minority in the Senate and majority in the House is something I am prepared to support, even if I have some problems with certain parts of it.

More than 54 million Americans have filed applications for unemployment benefits since mid-March, as GDP contracted 9.5% from April to June, a historic record pointing to a 32.9% decline for the year.

After the lunch, Sen. John Cornyn of Texas hinted at Republican worries over electoral damage: “How do you think it looks for us to be back home when this is unresolved? This is the most important thing we need to be doing.”

Sen. Lisa Murkowski of Alaska said she is reaching out to individual Democrats: “As I look to where we are, I feel the same discouragement, despair — despair that we’re here on the 4th of August,” she said. “We don’t have answers for people right now. So, we’re going to keep working.”

Another sign of progress came from Democrats after a 90-minute meeting with Meadows and Mnuchin later in the day in House Speaker Nancy Pelosi’s office.

Negotiators have set a deadline of Friday, when the Senate takes its autumn recess, for a deal.

White House advisors have said the reduced unemployment benefits are still “quite generous by any standard”. Mnuchin did not refer to any shift yesterday, but said he and Meadows proposed revision and extension of a moratorium on eviction from federal housing to December 31.

“We’re going to work around the clock the next few days to see if we can bridge the issues,” he asserted. “Some issues we’ve been able to agree on, some significant issues are still open.”

The White House offer did not include additional assistance for homeowners and renters that is in the HEROES Act.

“We know that the devil is in the details — so are the angels,” Pelosi said after the afternoon meeting.

Trump said nothing of substance about the negotiations, instead posturing that he could pass an executive order to stop evictions. He also indicated he would suspend the payroll tax, a provision to which Republican Senators objected as they left it out of their $1 trillion proposal.

In his daily White House appearance, Trump repeated false claims about the mortality rate from Coronavirus. He persisted with the assertion that the US is “at the bottom of the list”, even as he was being roundly mocked for the assertions in a black-comedy interview with Axios’ Jonathan Swan, filmed last week but broadcast on Tuesday night.

Trump also recycled his lies about fraudulent mail-in voting, fearing that the process could ensure his defeat in November.

But hours earlier, he undercut his position with a tweet supporting mail-in ballots in Florida, a state critical for his chance of a second term.

Whether you call it Vote by Mail or Absentee Voting, in Florida the election system is Safe and Secure, Tried and True. Florida’s Voting system has been cleaned up (we defeated Democrats attempts at change), so in Florida I encourage all to request a Ballot & Vote by Mail! #MAGA

Analysts noted that Trump advisors believe that, in contrast to their concerns about a high mail-in rate elsewhere, postal votes from Florida’s large proportion of elderly residents will assist their candidate.

Joe Biden, who presented his agenda for the Latino community on Tuesday, opened the day with an appeal to Trump.

On July 1st, Donald Trump predicted the coronavirus was going to "just disappear."

He was wrong — and more than 25,000 Americans died due to the virus last month.

Mr. President, step up and do your job before even more American families feel the pain of losing a loved one.