Why Was I Shot By Homeland Security Forces in Portland? 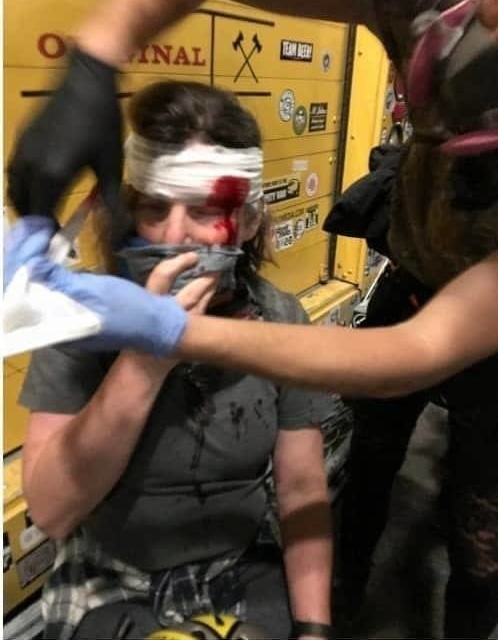 Trying to quash Black Lives Matter marches and hoping to base his re-election campaign on a crisis with “extremists”, “anarchists”, and “radicals”, Donald Trump has sent Homeland Security troops into Portland, Oregon, over the objections of State and local officials.

In unmarked uniforms and vehicles, the force has beaten and detained demonstrators in the largely-peaceful protests. There is no sign of relenting, despite the damage and widespread criticism — the Department of Homeland Security wrote on Sunday that the “violent situation Portland has witnessed for the past eight weeks continues with violent anarchists rioting on the streets”.

See EA on talkRADIO: With 100 Days to Election, Can Trump Campaign Succeed With “Lawless and Disorder” Tactics?
EA with TRT World and Monocle 24: Trump Stirs Up Portland Violence for His Re-Election

This is the story from one of those demonstrators, Professor Margaret Healy of Lewis and Clark College, of how she was shot for exercising her right to march in support of rights and justice:

This is my home. I was protesting peacefully. So why did federal troops shoot me in the head?

Since June, I have been attending peaceful protests in Portland neighborhoods in support of Black Lives Matter. I have gone with family and friends.

I am a 52-year-old mother. I am a history professor.

I went downtown yesterday [July 21] to express my opinion as a citizen of the United States, and as a resident of Portland. Of Oregon. This is my home. I was protesting peacefully. So why did federal troops shoot me in the head Monday night?

I was in a large crowd of ordinary folks. Adults, teens, students. Moms and dads. It looked to me like a cross-section of the City. Black Lives Matter voices led the crowd on a peaceful march from the Justice Center past the murals at the Apple store. The marchers were singing songs. We were chanting. We were saying names of Black people that have been killed by police. We observed a moment of silence in front of the George Floyd mural.

I wanted to, and will continue to, exercise my First Amendment right to speak. Federal troops have been sent to my city to extinguish these peaceful protests. I was not damaging federal property. I was in a crowd with at least a thousand other ordinary people. I was standing in a public space.

In addition to being a Portland resident, I am also a historian. My field is Modern European History, with specialization in the history of Germany and Eastern Europe. I teach my students about the rise of fascism in Europe.

By professional training and long years of teaching, I am knowledgeable about the historical slide by which seemingly vibrant democracies succumbed to authoritarian rule. Militarized federal troops are shooting indiscriminately into crowds of ordinary people in our country. We are on that slide.

“My Government Did This To Me”

It dawned on me when I was in the emergency room, and had a chance to catch my breath post- tear gas: my government did this to me. My own government. I was not shot by a random person in the street. A federal law enforcement officer pulled a trigger that sent an impact munition into my head.

After being hit, I was assisted greatly by several volunteer medics. At least one of them was with Rosehip Medic Collective. To take shelter from the teargas I was hustled into a nearby van. Inside they bandaged my head and drove me several blocks away. From there my family took me to the ER. I am grateful for the assistance, skill, and incredibly kind care of these volunteer medics.

We must take this back to Black Lives Matter. Police brutality against Black people is the real subject of these peaceful protests that have been happening in my city and across the country. What happened to me is nothing. It is nothing compared to what happens to Black citizens at the hands of law enforcement, mostly local police, every day. And that is why we have been marching. That is why I will continue to march.