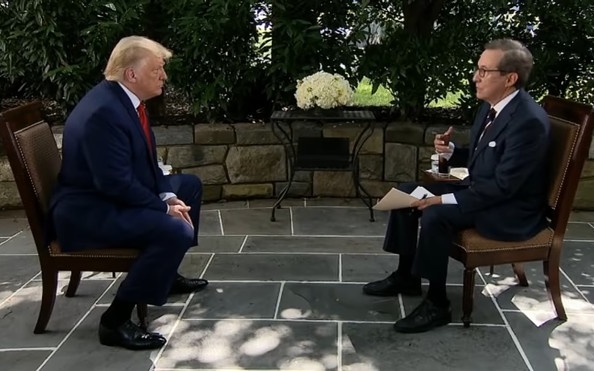 In a 40-minute interview on Fox News, an agitated Donald Trump lies, blusters, and threatens to defy an election outcome that removes him from office.

The interview with Chris Wallace, who calmly used facts to repeatedly expose Trump’s deceptions and puncture his boasts, was filmed in the middle of last week before the Administration’s latest attempts to quash medical and public health advice and limit Coronavirus testing.

*Falsely said that the US had the lowest Coronavirus mortality rate in the world — and doubled down on the lie by asking Press Secretary Kayleigh McEnany to get a sheet of paper which failed to bear out his claim.

Wallace pointed out that, in fact, the US death rate per case is the *seventh-highest” across the planet. The American rate of 42.83 per 100,000 people is the third-highest.

*Complained that increased testing was “creating trouble for the fake news to come along and say, ‘Oh, we have more cases.’”

Wallace explained that testing is up 37%. Trump tried to grab control, “Well, that’s good”, only to be deflated by the interviewer’s “cases are up 194%” because of the sharp increase in positive outcomes.

Trump then made up the statistic that “99.7%” of people will get better: “Many of those cases are young people that would heal in a day.”

He compounded his lie with the assurance that European countries don’t test for the virus. Then he blamed China.

"They have the sniffles … many of those cases shouldn't even be cases" — Trump is still downplaying the severity of contracting Covid-19 pic.twitter.com/cT24njBK9n

*Called the top White House Coronavirus export Dr. Anthony Fauci “a little bit of an alarmist” amid a campaign by Trump’s inner circle to belittle and discredit the doctor.

Trump then misrepresented Fauci’s position to reiterate his claim in recent weeks that the expert is “wrong” about the threat of the virus.

He dismissed the warning by Centers for Disease Control head Robert Redfield that the pandemic could worsen this fall and winter: “I don’t know, and I don’t think he knows.”

As Trump pursues a full “reopening” of the US for his re-election, the White House has buried the CDC guidance on safety in schools, churches, and other public places.

Trump repeated his six-month dismissal of the threat: “It’s going to disappear, and I’ll be right. Because I’ve been right probably more than anybody else.”

*Rejected a national mandate for the wearing of masks, “It’s up to the governors.”

Dr. Francis Collins, the director of the National Institutes for Health, said the conversion of masks into a political issue was “bizarre”: “Our best chance is for all of us to get together and do the right thing, and stop fighting so much about the divide between different political perspectives, which is just getting in the way.”

More than half of states, with Republican and Democrat Governors, have issued the mandates. Colorado Gov. Jared Polis, a Democrat said it “was a really easy decision” after reviewing data that the wearing of masks reduces infections.

But Mississippi Gov. Tate Reeves, a Republican, insisted, “If I believed that was the best way to save lives in my state, I would have done it a long time ago.” Cases and deaths in the state have soared in the past month.

Trump bristled when Wallace showed him a Fox poll that showed Democratic Presidential nominee Joe Biden leading by 49% to 41%. (An ABC-Washington Post poll released later on Sunday has Biden up 55%-40%.) The survey also showed Biden ahead among voters on the handling of Coronavirus, other issues, “compassion”, and even Trump’s declared strength of the economy.

“I understand you still have more than 100 days to this election, but at this point you’re losing,” Wallace said:

After Trump trotted out his falsehood that mail-in voting is fradulent, Wallace asked, Are you suggesting that you might not accept the results of the election?

Trump replied, “What I’m saying is that I will tell you at the time. I’ll keep you in suspense. OK?”

Wallace pressed, “Can you give a direct answer you will accept the election?”

TRUMP: "I think mail-in voting is going to rig the election."

WALLACE: "Are you suggesting that you might not accept the results?"

WALLACE: "Can you give a direct answer that you will accept the election?

TRUMP: "I have to see." pic.twitter.com/mPDPLY9vsr

He then complained, when asked about how he regarded his years as President, “I think I was very unfairly treated. From before I even won I was under investigation by a bunch of thieves, crooks.”

Wallace tried to lift the exchange, “But what about the good parts?”

Trump refused the invitation, “No, no. I want to go [through] this. I have done more than any president in history in the first three and a half years….I’ve been very unfairly treated, and I don’t say that as paranoid.”

Trump also was caught out — and piled on the embarrassment — over his lie that Biden will “defund the police”, amid Black Lives Matter marches for reform of policing.

Wallace calmly said, “No he, sir, he does not….[His charter with Bernie Sanders] says nothing about defunding the police.”

Trump thundered, “Oh really? It says abolish, it says — let’s go. Get me the charter, please.”

When Press Secretary McEnany brought the document, Trump spent some time looking for “defund”. He never found it.

Wallace asked if Trump could understand why black Americans might be upset over police violence after the May 25 murder of George Floyd, reading out statistics that blacks are far more likely to be killed by police than whites.

Trump repeated his false of insistence of parity, “I mean, many, many whites are killed. I hate to say, but this is going on for decades.”

My favorite part of the very good Chris Wallace interview with @realDonaldTrump:
TRUMP: “Now we have the 1619 project. What is THAT all about?”
WALLACE: “Slavery.”

He then defended the detention of peaceful protesters in Portland, Oregon by Homeland Security officers in unmarked uniforms and vehicles: “Those are anarchists and we’ve taken a very tough stand.”

Mr. President, this is an attack on our democracy.https://t.co/KGGBTI49eu

Trump maintained his refusal to call for removal of the Confederate flag from public spaces. Asked if he is offended by the banner, he tried another false equation and the diversion of “cancel culture”: “I’m not offended either by Black Lives Matter. That’s freedom of speech. And you know, the whole thing with cancel culture, we can’t cancel our whole history.”

Trump inadvertently injected comedy into the discussion when he was asked by Wallace about polls that show voters have more faith in Biden’s mental ability, despite Trump’s derision of the Democratic nominee as deficient.

Wallace noted of Trump’s boast that he “aced” a mental acuity test, holding up a page, “It’s not that hard a test. They have a picture and it says, “What’s that?” and it’s an elephant.”

WALLACE: Well, one of them was count back from 100 by seven.

TRUMP: Let me tell you…

"I took the [cognitive] test too, when I heard you passed it. It's not the hardest test. It shows a picture and it says, 'what's that,' and it's an elephant." — Chris Wallace pushes back on Trump hyping the cognitive test he passed at Walter Reed pic.twitter.com/8Df8Ez10Ma