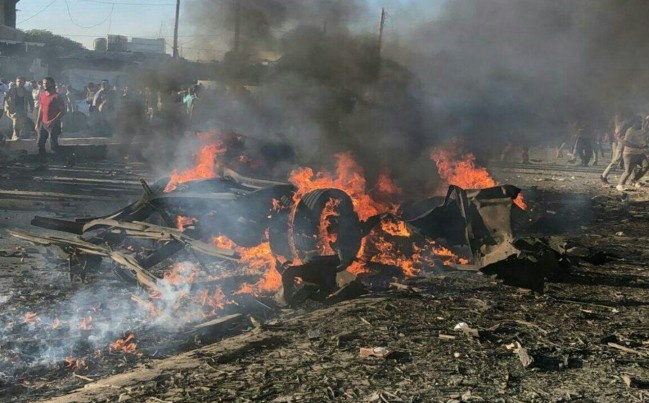 Burning remains of a vehicle after a car bomb near Azaz, close to the Turkish border in northwest Syria, July 19, 2020

At least five civilians have been killed and 98 injured in car bombings in opposition-held northwest Syria.

The five fatalities, with 85 wounded, were caused by the detonation of an explosives-laden vehicle in the town of Sajo, north of the city of Azaz near the Turkish border. Fifteen of the wounded are in critical condition and in hospitals in the Turkish city of Kilis.

The victim toll in the City of #Azaz has risen to 6 dead and more than 64 injured, after a car bomb exploded in this city in northern #Aleppo, this afternoon. #WhiteHelmets are continuing search and rescue operations in the area. pic.twitter.com/GEM9tPfnoe

Earlier Sunday, at least 13 people were injured in an attack in Afrin, also in the opposition-controlled area.

The Afrin bomb was placed in a rebel Syrian National Army vehicle in the city center, according to a security source.

The source pointed to the Kurdish militia YPG in an interview with Daily Sabah, a site close to Turkey’s Erdoğan Government.

Ankara considers the YPG and the Syrian Kurdish Democratic Union Party (PYD) to be part of the Turkish insurgency PKK, which has fought security forces for more than 35 years.

13 civilians, including 6 children, were injured this morning, after an IED explosion from a civilian car in #Afrin City in #Aleppo. Our #WhiteHelmets teams were present and worked to help the injured and secure the place. pic.twitter.com/CiFhx1lFBX

In spring 2018, Turkey and anti-Assad rebels took much of the Kurdish canton of Afrin, with Ankara labeling the offensive “Operative Olive Branch”. Since then, a series of bombings have killed scores of civilians in cities and towns near the border.

Syria Daily, April 20: 40+ Killed in Bombing in Afrin in Northwest