Syria Daily: 40+ Killed in Bombing in Afrin in Northwest 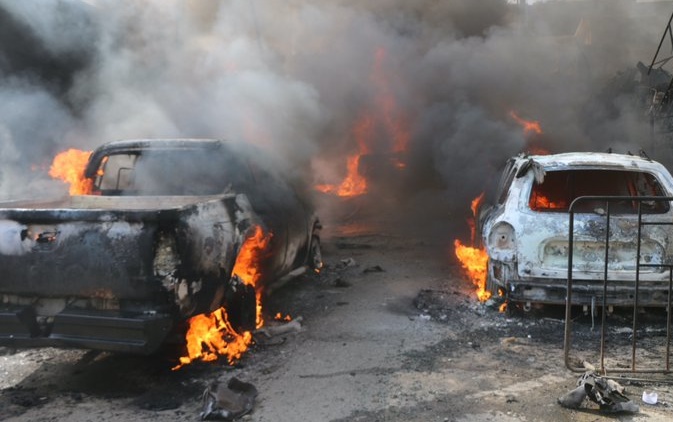 Aftermath of a bombing in Afrin in northwest Syria which killed at least 40 people and wounded 47, April 28, 2020

At least 40 civilians, including 11 children, have been killed in a bombing in the city of Afrin in northwest Syria.

Another 47 people were wounded. Local activists fear the death toll will rise.

In a hospital yard, 10 charred bodies were covered with blankets next to ambulances. People in the Afrin area were urged to go to hospitals and donate blood.

Video showing the moment today where at least 60 people were killed in the city of Afrin after a car bomb was detonated in their midst, most likely by #Kurdish #PKK/#YPG/#SDF militias. pic.twitter.com/2e2cO7kIs6

The Turkish Defense Ministry said the attack was carried out the Kurdish YPG militia, whom Ankara considers a “terrorist” organization.

Some pro-YPG accounts on social media celebrated the bombing, but the Syrian Kurdish outlet Hawar News Agency limited its report to the headline, “An Explosion in Afrin Leaves Mortalities, Casualties”.

Turkish forces and anti-Assad fighters took control of much of the Kurdish canton of Afrin after a brief offensive in early 2018. The area has since suffered a series of bombings which have killed civilians.

The YPG is the leading faction in the US-supported Syrian Democratic Forces, who removed the Islamic State from the Kurdish cantons of Kobani and Cezire between 2015 and 2019. The militia is linked to the Turkish Kurdish insurgency PKK, which has battled Ankara’s security forces for more than 35 years.

The Syrian Democratic Council, the political wing of the Syrian Democratic Forces, said the bombing was a “cowardly terrorist act that targeted innocent civilians and threatens the remaining sons of Afrin to move and leave their villages and cities”.

The US echoed the SDC’s language, but did not name the YPG.

Secretary of State Mike Pompeo issued a statement calling for “support and implementation of a nationwide ceasefire in Syria following today’s cowardly act of terror carried out on innocent victims in Afrin. Such acts of evil are unacceptable from any side in this conflict.”

Charred bodies and besieged families.. Scenes from the first moments of the horrific bombing that targeted a popular market in #Afrin City, north of #Aleppo, this afternoon, which kidnapped the lives of 42 people so far. pic.twitter.com/Ya6e8gD3aT