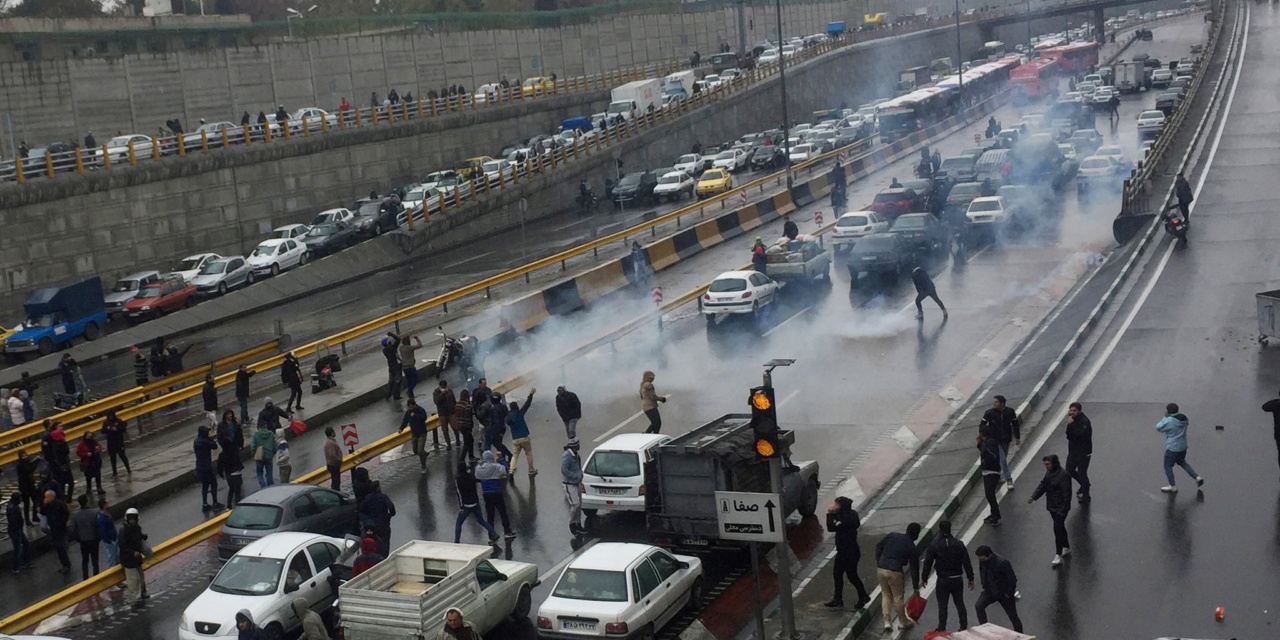 A protest in Tehran against a sudden rise in petrol prices, November 16, 2019 (WANA/Reuters)

The Supreme Court has paused the executions of three protesters condemned over November’s mass demonstrations about economic conditions.

The court stepped back on Sunday from last week’s confirmation of death penalities for Saeed Tamjidi, Mohammad Rajabi, and Amirhossein Moradi after social media campaigns featuring the hashtags “Don’t Execute” in Persian and “Stop Executions in Iran” in English.

Defense lawyers said the Supreme Court has ordered reconsideration of the case, which usually means referral to a lower court for fresh investigations.

The attorneys may have invoked Article 474 of Iranian law, which calls for reconsideration of a case to reach consensus. One judge voted last week to quash the sentences.

Article 477 which calls on the Judiciary chief to intervene and revoke a previous ruling and order a new round of investigation and hearings in contested cases.

The sentences against Amirhossein Moradi, Saeed Tamjidi, and Mohammad Rajabi were upheld last Friday, according to their lawyer Hosein Taj. One judge voted to quash the verdicts.

Supreme Court has upheld the sentence issued by the Revolutionary Court. Despite the evidence and the arguments presented, the [judges] opposed to the death penalty were in the minority. There are serious flaws in form and substance in the initial and final rulings, which we will argue in our filing for a judicial review.

The three men were sentenced to death on February 22 by the hardline Judge Abolqaem Salavati of the Revolutionary Court for “participation in vandalism and arson with the intent to confront and engage in war with the Islamic Republic of Iran”.

The defendants’ legal team said that the prosecution was based on “confessions that were extracted under aberrant conditions” and that “we have not been permitted to defend [our clients] and they have no information about their trials”.

We differentiate between rioting and protesting, and as you witnessed, there were a few people who caused riots and set fire to gas stations and banks, and even killed people. Society expects punishment for anyone who commits a crime.

Moradi was detained on November 28, less than two weeks after the four-day protests. Rajabi and Tamjidi were seized a month later after they were extradited from a camp in Turkey.

All three men said they were subjected to “prolonged solitary confinement”, interrogation “without a lawyer present”, and torture including beatings, electric shock treatment, and interrogators standing on their chests.

Iran’s @khamenei_ir must quash the death sentences of protesters—Amirhossein Moradi, Saeed Tamjidi & Mohammad Rajabi—immediately! Their trial was unfair & they said they were subjected to torture through beatings, electric shocks and being hung upside down. #اعدام_نکنید

November’s protests were sparked by the Government’s sudden increase of petrol prices by 50% to 200%. The demonstrations criticized corruption, unemployment, inflation, and a collapse in living standards.

Amnesty International documented the killing of 304 protesters by security forces, with many people shot at close range and while fleeing. Iranian officials said up to 1,500 people — security forces, demonstrators, and bystanders — were slain.

See Iran Daily, December 23: Supreme Leader — “Do Whatever It Takes to End The Protests”