As Syrians Stay Away, Assad Regime Shuffles Its Loyalists via Parliamentary Election 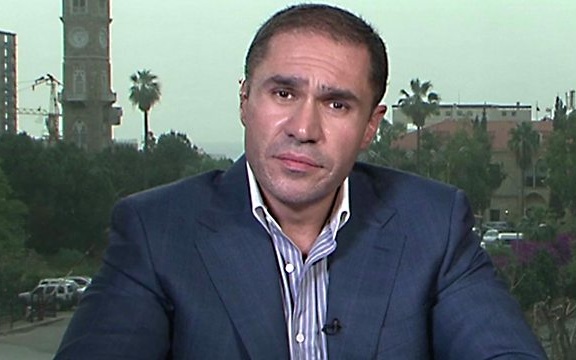 Since the Syrian uprising began in March 2011, Fares Shehabi has been a diehard Assad loyalist. But now the regime has replaced him in Parliament.

The outcome in last Sunday’s Parliamentary elections in Syria was far from a shocker. With the security forces vetting all candidates, the legislature was filled with loyalists to Bashar al-Assad. Of the 250 seats, 177 went to members of the “National Unity List”.

But beyond the expected result, the results indicate a shuffling by Assad’s inner circle of those who are favored.

And the turnout also exposes the narrowness of support for the perpetual regime. With millions of Syrians displaced outside and inside the country and amid fears of Coronavirus, officials could not massage a participation rate beyond 33%.

Rim Turkmani, director of the Syria Research Programme at the London School of Economics, summarizes to Middle East Eye, “Previously, there would be a sizeable turnout but the lack of participation could be a signifier of people losing interest and hope.”

A clue to Assad’s string-pulling comes in the fate of former MP Fares Shehabi.

Shehabi, a regime insider who used connections to build up a business empire in Aleppo, has been one of the most prominent Assadists on social media and international outlets during the 112-month Syrian conflict. He has faithfully put out the regime’s propaganda and disinformation and threatened to kill a journalist.

But he may have overreached with attempts to become Prime Minister, promoted by Russian outlets. He was passed over as Electricity Minister Imad Khamis was selected.

Now he is out of Parliament, losing his seat to Hussam Katerji, a reported middleman for oil sales between the Islamic State and the Assad regime.

With no hint of irony, Shehabi complained on Facebook of a “malicious and exposed conspiracy” against him: “If I lost in transparent and clean elections, it would have been different.”

(Shehabi appears to have removed the line, “The message was clear: blind obedience to the growing system of corruption or exclusion and punishment,” after it was published in Middle East Eye.)

In contrast, members of the Berri family of western Syria are now in Parliament.

Long-time Assad loyalists, the family were prominent in the early years of the conflict as part of paramilitary “shabiha”, rounding up protesters and gathering intelligence through methods such as young boys selling roses. 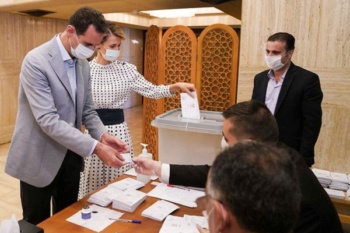 Bashar and Asma al-Assad show off their votes

The Regime’s “Message to the Cronies”

Analysts note that no one is secure from regime intrigue, amid a collapsed Syrian economy and dependence on the support of Russia and Iran.

Zaki Mehchy of the Syrian Center for Policy Research spoke of the replacement of Fares Shehabi with Hussam Khaterji:

It’s not about Katerji, because the last three months showed that the regime was able to to get rid of [Assad’s cousin] Rami Makhlouf, a businessman who was even more powerful than Katerji.

Katerji is only a tool and one of many cronies used in this theater by the regime to present itself as a legitimate authority.See Syria Daily, May 22: Regime Travel Ban on Assad’s Cousin Makhlouf

Lina Khatib of London’s Chatham House sees an attempt by Assad to display authority, even as Moscow shows concern over the economic situation, corruption, and Assad’s refusal of compromise for a political resolution.

Historically, the Assad regime has used the elections to send a message to the cronies it has been relying on throughout the conflict to support its economic and military affairs that it still has upper hand in this relationship, despite its increasing dependency on these cronies.

The regime is trying to show its cronies that no matter how much their role in Syria grows, ultimately it is the regime that facilitates or revokes their access to power and resources.

The 2020 outcome bears out the conclusions of an academic study of the 2016 Parliamentary elections, by Ziad Awad and Agnès Favier:

Except for traditional Baathists….the characteristics of representatives of other interest groups (such as businessmen, Sunni clerics and tribal leaders, who are traditionally elected as “independents”) profoundly changed and new social
categories (such as militia leaders and families of martyrs) emerged.

The common characteristic of these newcomer MPs is that they had participated in war efforts alongside the regime….The 2016-2020 Assembly looked like a “council of war”.