TrumpWatch, Day 1,283: Coronavirus — How Trump and DeSantis Condemned Florida to a Deadly Surge 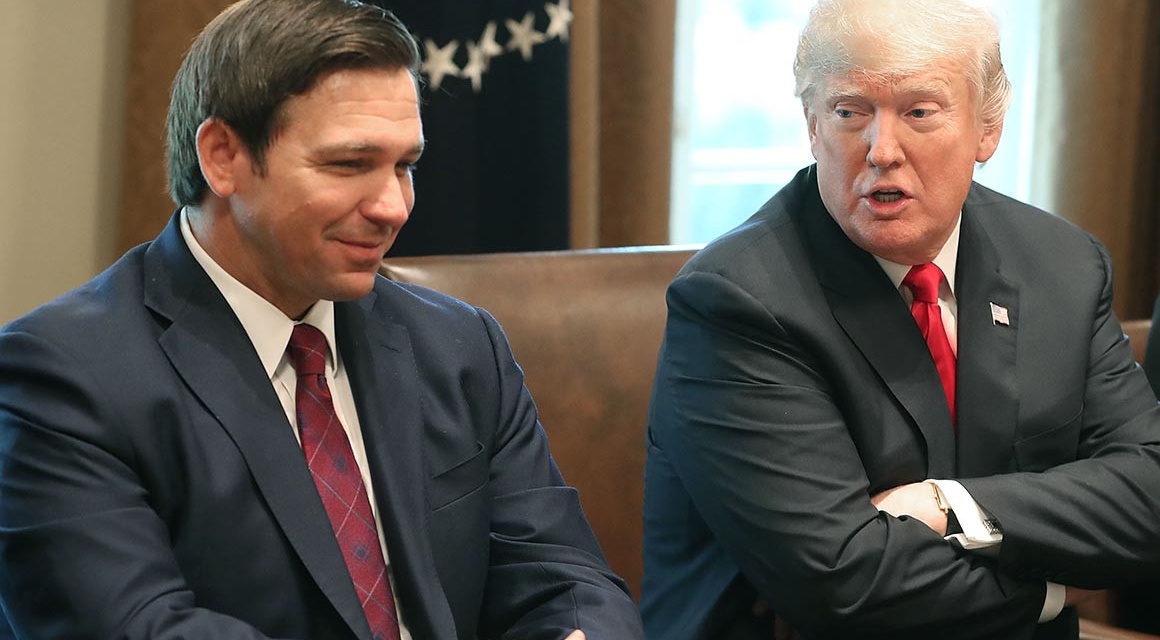 Florida had been lightly hit in the initial phase of the virus from February through April, compared to the epicenters of New York, New Jersey, Connecticut, Michigan, and Louisiana. But after DeSantis implemented Trump’s insistence on “reopening” businesses, beaches, restaurants, bars, and movie theaters, the state soared to the fourth-highest rate of daily cases in the world, behind the US, Brazil, and India.

Yet far from confronting the crisis, DeSantis halted briefings last month with specialists. He has had only one meeting in July with his top public health official, Scott Rivkees.

University of Florida research scientist Thomas Hladish’s last call with the Health Department was on June 29: “I never received information about what happened with my ideas or results. But I did hear the governor say the models were wrong about everything.”

Florida passed New York on Friday for the second-highest infections in the US, behind California. It now has 414,511 cases. Deaths have sharply risen to 5,777, eighth-highest in the country.

The state’s intensive care units are at breaking point, with some over capacity. The Trump-DeSantis vision of a revived economy has given way to an overwhelmed unemployment system and a shattered tourism industry.

Single-day case recods were set by 18 states in the past week, from California to South Carolina to Hawaii. The seven-day US average has risen from 31,402 on June 24 to 66,100 on Friday.

DeSantis was feted by Trump on April 28, a few days before Republican governors began fulfilling Trump’s “reopening” in states such as Florida, Georgia, South Carolina, Tennessee, and Arizona. All are now surging in Coronavirus cases and deaths.

The Governor said the lifting of restrictions on businesses, beaches, and other public spaces was “not a very big leap” and proclaiming his great success: ““Everyone in the media was saying Florida was going to be like New York or Italy, and that has not happened because we understood and had a tailored and measured approach.”

Rebekah Jones, one of the top data scientists, said she was fired for not following the command to manipulate information to show a positive outlook: ”

I was asked by DOH [Department of Health] leadership to manually change numbers. This was a week before the reopening plan officially kicked off into Phase One….

It was very clear at that point that the science behind the supposedly science-driven plan didn’t matter because the plan was already made.

The virus soon raced out of control. DeSantis retreated into reliance on his advice of his wife Casey, a former TV reporter and host, and his Chief of Staff Shane Strum, a former hospital executive

“It’s a universe of three — Shane and Casey,” said a “Republican consultant close to DeSantis’s team”.

Work with the University of Florida’s modelling team has ended. There are no plans for consultation beyond the monthly meeting with public health official Rivkees. A Coronavirus Task Force, with only five doctors among 100 members, met only twice since April and issued a report echoing the White House’s political lines downplaying the threat.

Meanwhile, DeSantis is speaking regularly with Trump Administration officials. He has appeared twice on Fox News and called in to the radio show of hard-right polemicist Rush Limbaugh.

He moved to Phase 2 of reopening in June, pushing aside the warnings of medical experts, hospital staff, and mayors. Measures to trace and track the virus were not implemented.

Infectious disease reseacher Dr. Hladish said experts tried to raise the subject with the Governor’s staff but “we were told that they were too busy to talk”.

To cover up the scale of Florida’s surge, the Governor has portrayed it as a spread among younger people. He has rejected the reimposition of restrictions.

“I think we’re on the right course,” he said as Florida’s cases passed 400,000> He amplified Trump’s demand for complete in-class instruction in schools from next month.

See TrumpWatch, Day 1,282: Coronavirus — CDC Caves In to Trump Over Reopening of Schools

Ostracized by DeSantis, medical and public health staff face the reality of the crisis. “The numbers are up, my man,” says Frank Rollason, the emergency management director in Miami-Dade County. “They speak for themselves.”

“Ron DeSantis is doing a great job and will go down in history as a great governor of Florida,” a Trump spokeswoman told The Washington Post.

But last week Trump finally faced the damage of the approach, not to Floridians but to his re-election campaign.

In May, DeSantis assured Trump that the Republican National Convention could be moved from North Carolina, where Gov. Roy Cooper was insisting on social distancing. DeSantis said masks would not be required and the virus would not be a major problem in August.

On Tuesday, Trump cancelled plans for the convention in Jacksonville.

However, DeSantis has not paid any political price, at least with Trump. On Friday he was in the White House as Trump signed an order on prescription drug pricing.

Richard Hopkins, an epidemiologist and 19-year veteran of the Florida Department of Health, explained how DeSantis and his staff are locked into politics above safety and lives.

They keep hoping it’s going to go away by itself. I don’t know what’s going on — whether they’re afraid that they will get primaried by someone to their right if they take appropriate public health action.