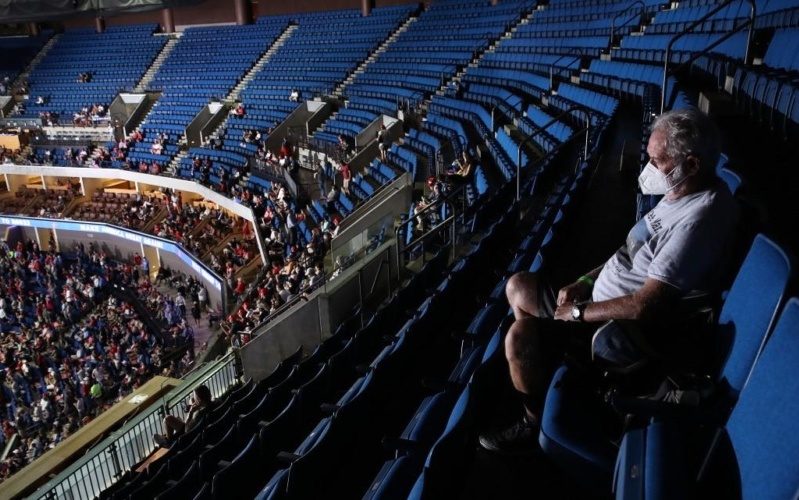 A man sits in an empty section of the BOK Arena at a Donald Trump appearance, June 202, 2020 (Getty)

Donald Trump speaks for 101 minutes in Tulsa, Oklahoma to thousands of empty seats.

Despite Trump’s claim last week of “over a million” requests for tickets, the BOK Center (capacity: 19,199) was largely vacant in the upper level and some empty spots on the floor.

Plans for Trump to give a pre-rally speech in an overflow area were scrapped. Almost no one was present as workers dismantled the stage.

Trump and his campaign tried to cover with the lie that “radicals” had blocked entry into the arena. Tulsa police said there were no incidents, and multiple journalists reported that there was no sign of any obstacles.

Almost all those who did attend were mask-free. However, a surge in Coronavirus in Oklahoma may have deterred others — the state, with about 40 daily cases at the start of the month, recorded 331 on Friday.

Tulsa, Oklahoma, and White House medical advisors spoke of the high risk of a “super-spreader” event in a crowded inside setting. Six of Trump’s campaign staff for the rally tested positive for Coronavirus.

Others, including Rep. Alexandria Ocasio-Cortez, said “Zoomers”, TikTok enthusiasts, and even fans of South Korean K-Pop — who have been supportive of Black Lives Matter — had flooded the campaign with ticket requests.

Trump’s rambling address had his standard insults of political opponents, such as Democratic Presidential nominee Joe Biden, and the media. He portrayed the mass anti-racism marches across the US, following the May 25 murder of George Floyd, as “leftist radicals”, a “mob”, and paid actors.

A long section of his impromptu remarks was devoted to his faltering walk down a shallow ramp, following stumbling speech and his two-handed attempt to hold a glass of water, after his speech on June 13. With observers speculating on the state of his physical and mental health, Trump told his audience about a “steep” descent on a slippery ramp.

After a rant about how he can *definitely* drink a glass of water normally, Pres. Trump demonstrated by taking a sip and flinging a half-full cup across the stage. Supporters at his rally in Tulsa, OK erupted into cheers. pic.twitter.com/XzCMstsfoc

In his most provocative declaration, Trump said the US should reduce Coronavirus testing so confirmed cases and the death toll — now approaching 120,000 fatalities — were lower.

Defending himself against mismanagement of the crisis, Trump resorted to racist labels of the “Kung Flu”.

See also Coronavirus: The US Politics of “Kung Flu”

Stepping back from the Administration’s limited order for police reform, he scoffed:

It’s one in the morning, and a very tough⁠ – I used the word on occasion – hombre is breaking into the window of a young woman whose husband is away as a traveling salesman or whatever he may do. And you call 911 and they say, “I’m sorry this number is no longer working.”