Coronavirus: The US Politics of “Kung Flu” 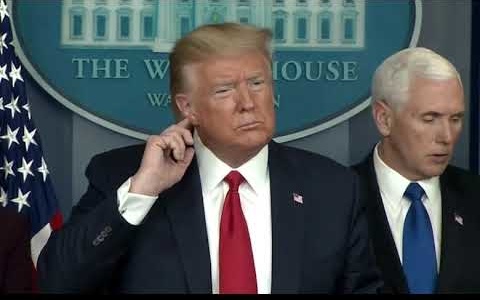 The latest from America Unfiltered, a joint project of EA WorldView and the Clinton Institute, University College Dublin:

See also What is America Unfiltered?

This morning a White House official referred to #Coronavirus as the “Kung-Flu” to my face. Makes me wonder what they’re calling it behind my back.

The virus of racist Sinophobia has long lain dormant in America’s bloodstream, now jolted awake by Donald Trump’s repeated tweets of Covid-19 as “the Chinese Virus” and his ensuing defense of the term in press conferences. A close-up photograph on March 19 captured Trump’s briefing notes, where “corona” in Coronavirus was crossed out and replaced by “CHINESE” in caps with a sharpie.

As the virus is named after the crown-like spikes on its surface, Trump has coronated the Chinese as the archvillain. He has forgetten that the vast majority of Chinese are victims of this alien invasion — the only exception being the patient zero who most likely helped himself or herself to pangolin or other exotic meats around Wuhan’s Huanan Seafood Wholesale Market in the dead of winter 2019.

Déjà vu, all over again: In the wake of the Japanese Imperial Navy attack on Pearl Harbor, Japanese Americans were interned, since they — Japanese and Americans of Japanese descent — are all alike to white Anglo-Americans.

Trump’s enthroning of the Chinese en masse is a deliberate strategy to shift responsibility of the Commander-in-Chief in the fight against the pandemic. Rather than a miniscule, invisible virus, Trump erects a straw man of good standing, from the medieval yellow peril to the millennial “Real Sick Man of Asia”, in Walter Russell Mead’s controversial phrase.

Covid-19 has mutated from Trump’s usual tactic of fake news and democratic “hoax” to a real pandemic that Trump claims to have predicted all along. The fact that between 40% to 50% of Americans continue to buy into Trump’s demagoguery is symptomatic of what truly ails America. The fear of losing power, real or imagined, drives die-hard Trump supporters to invest in their Great White Hope of #MAGA — just because Trump promises to shoot someone on Fifth Avenue, evidently one of the haves, “the coastal elites”, shopping at Saks, museum-hopping, sipping cappuccino.

Why does Trump not set the figure of speech at Main Street of the Rust Belt? Tribal jealousy, resentment, even self-loathing externalized as violence in words and/or deeds: all these mixed emotions converge in our reaction to Covid-19 raging across the globe.

Sheng-mei Ma is Professor of English at Michigan State University, specializing in Asian Diaspora and East-West comparative studies. He is the author of Off-White: Yellowface and Chinglish by Anglo-American Culture (Bloomsbury, 2019).