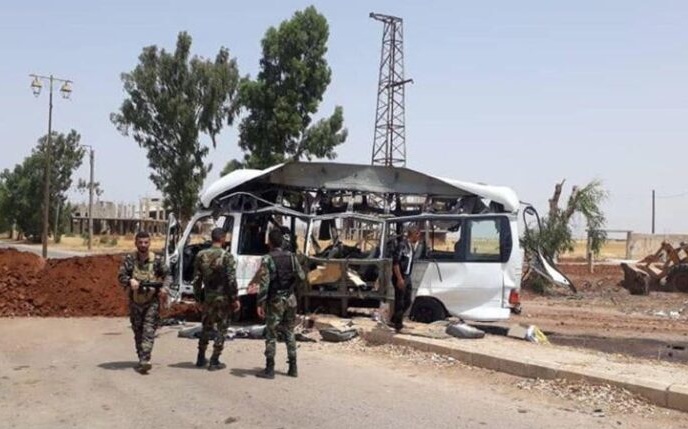 The remains of a bus carrying Assad regime troops after it was bombed in Daraa Province, southern Syria, June 20, 2020

At least nine Assad regime troops have been killed in a bus bombing in eastern Daraa Province in southern Syria, according to both pro-regime and pro-opposition outlets.

The bus, carrying about 40 soldiers, was targeted by an improvised explosive device on Saturday. A pro-Assad blog said two dozen troops were injured.

The soldiers were from the Fifth Legion, a pro-regime militia formed by the Russian military.

This has been reported earlier but so far no martyrs have been posted on social media:

A bus carrying 40 5th Corps fighters on the Kahil-Sahwa road in Daraa was targeted by an IED and destroyed. Pro-gov sources report 8 dead and 20 injured. pic.twitter.com/dNRAEeyBJv

There has been no claim of responsibility, but insurgents have carried out a series of attacks against regime personnel since Daraa — the initial site of the Syrian uprising in March 2011 — was reoccupied by a Russian-enabled offensive in summer 2018.

Since July 2018, there have been at least 517 incidents, including shootings, IEDs, and motorcycle and car bombs. Reports say almost 225 pro-Assad troops and officials, including 45 former rebels, have been slain since June 2019. About 60 civilians have died.

In March, regime forces attacked Sanamayn in northern Daraa to oust a group of rebels, transferring the men to northern Syria. However, the assault failed to check the attacks, with at least 40 regime soldiers and militiamen slain since then.

On May 4, nine Internal Security officers were killed in Muzayrib by a former opposition commander who accused the regime of kidnapping and killing his son and son-in-law.

The regime then sent military reinforcements to western Daraa Province, but three members of a “reconciliation committee” were assassinated on May 27.