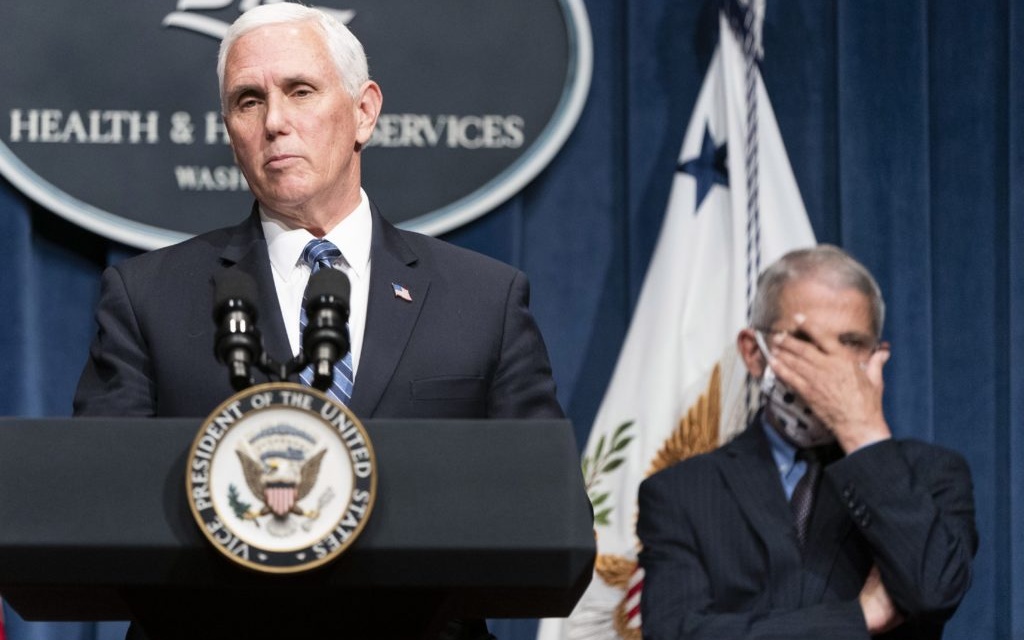 Daily Coronavirus cases in the US set a record for the third consecutive day, topping 45,000.

Eleven states have doubled their rate of infection in the past two weeks. Alabama, Alaska, California, Georgia, Missouri, Nevada, Oklahoma and Texas have also set records this week.

State Governors have suspended further re-opening and have reimposed some measures. Among them are Texas Gov. Greg Abbott, a fervent Trump supporter, and Florida Gov. Ron DeSantis, who boasted during a White House appearance in late April that he had vanquished the virus.

But in the first White House Coronavirus Task Force briefing in two months, Pence proclaimed, “We have made truly remarkable progress in moving our nation forward.”

Defying medical advice to wear a mask in public — as he and his staff had on Thursday during a tour of an Ohio automobile plant — Pence continued, “We’ve all seen the encouraging news as we open up.”

The declaration echoed Trump son-in-law Jared Kushner’s “great success story” at the end of April, as the death toll passed 60,000.

But Dr. Fauci, who warned this week that “we are still in the first wave”, did not bow to Pence’s cheerleading. He said the Coronavirus spikes in the South and West could spread to other regions.

The doctor spoke of “failure” with some infected but asymptomatic people unknowingly spreading the virus, and with reluctance or inability to self-quarantine.

State and local leaders sided with Fauci, unwilling to wait for any leadership from the Trump Administration. San Francisco announced on Friday that it is delaying plans to reopen zoos, museums, hair salons, tattoo parlors, and other businesses from Monday. Mayor London Breed wrote on Twitter:

Our reopening process is guided by data and science.

COVID-19 cases are rising throughout CA. We're now seeing a rise in cases in SF too. Our numbers are still low but rising rapidly.

As a result, we're temporarily delaying the re-openings that were scheduled for Monday.

Mayor Carlos Gimenez of Miami-Dade County said he will sign an emergency order closing beaches from July 3 to July 7 over the holiday weekend. Gatherings of more than 50 people, including parades, will be banned.

“The closure may be extended if conditions do not improve,” Gimenez said. “I have decided that the only prudent thing to do to tamp down this recent uptick is to crack down on recreational activities that put our overall community at higher risk.”

In Houston, Texas, where intensive-care units are almost filled to capacity, the top elected official, Lina Hidalgo, said, “We find ourselves careening toward a catastrophic and unsustainable situation.”

Hidalgo said the rise in cases will overwhelm the hospital system “in the near future”.

The European Union sent its own signal with the report that it is set to ban travellers from the US.

Trump: Look at the Statues

Some Trump allies held out. Arizona, Gov. Doug Ducey rejected any limit to re-opening, even as hospitals neared capacity

“This is not another executive order to enforce, and it’s not about closing businesses,” Ducey said. “This is about public education and personal responsibility.”

Trump, who said on Thursday that Coronavirus is an “artificial problem”, was silent yesterday.

Instead, he denigrated the anti-racism marches across the US and issued a token executive order about defacing of statues, warning on Twitter that protesters could be imprisoned for up to 10 years.

Meanwhile, Pence continued to reject medical advice at the briefing.

He defended Trump’s failed campaign rally in Oklahoma last Saturday, with its violation of social distancing inside an arena.

The freedom of speech, the right to peaceably assemble, is enshrined in the constitution of the United States. And we have an election coming up this fall. We still want to give people the freedom to participate in the political process, and we respect that.