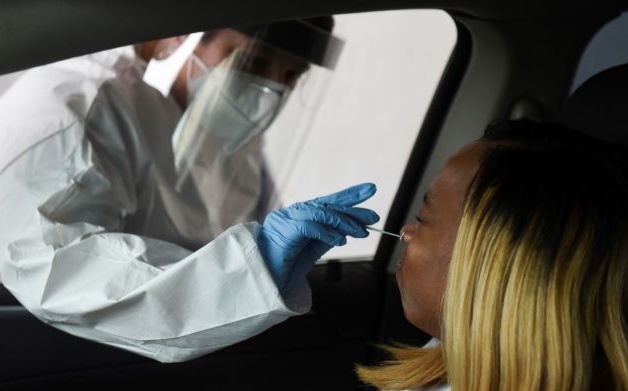 A medic administers a Coronavirus test in Houston, Texas

He is like a child who can’t believe this has happened to him — all his whining and self-pity. Well, this pandemic didn’t happen to him. It happened to all of us. And his job isn’t to whine about it. His job is to do something about it, to lead.

The former Vice President called on the Trump Administration to stop its ongoing attempt to bury ObamaCare, resulting in millions of Americans losing health overage.

Perhaps most cruelly of all, if Donald Trump has his way, those who have complications from Covid-19 could become the new preexisting conditions.

If Donald Trump prevails in court, insurers would be allowed once again to strip away coverage, jack up premiums, simply because of the battle they survived fighting Coronavirus.

Biden summarized, “We need a public option, now more than ever, especially when more than 20 million people are unemployed.”

He held up his black cloth mask as an essential precaution amid Coronavirus, contrasting it with Trump’s unwillingness to wear one.

Meanwhile, Vice President Mike Pence and his staff all refused to wear masks as they toured an automobile plant in Ohio:

Vice President Mike Pence tours Lordstown Motors, in Lordstown, OH. No one, including the VP, wears a mask. pic.twitter.com/WmAmxQ0leS

ORIGINAL ENTRY: Daily Coronavirus cases in the US set a record for the second day in a row, with almost 2,500 deaths in 24 hours, the highest number in weeks.

But Donald Trump tells his friend Sean Hannity on Fox TV that the pandemic is an “artificial problem”.

The US death toll reached 124,416 on Wednesday. There are more than 2.42 million confirmed cases, with the record increase of more than 41,000 yesterday.

Some governors halted the lifting of stay-at-home and social distancing restrictions.

Among them were Texas Gov. Greg Abbott, a Trump ally who had quickly followed the instruction to “reopen” businesses and public spaces at the start of May.

Dr. Robert Redfield, director of the Centers for Disease Control and Prevention, said the surge could be even higher, estimating that the number of those with Coronavirus is about 10 times higher than the confirmed cases.

“We probably recognized about 10% of the outbreak,” Redfield said in a call with reporters.

And almost 1.5 million workers filed new unemployment claims last week. Abouve 47 million Americans have applied since mid-March, with more than one million for 14 consecutive weeks. More than 19 million people are still collecting state unemployment insurance, down slightly from 25 million in early May.

Trump: Coronavirus is “A Kid With The Sniffles”

But Trump, having denied any threat from Coronavirus at the outset of the pandemic, continued to belittle the crisis on Thursday.

He told his friend Hannity, “I call this an artificial problem,” and repeated his insistence, “If we didn’t do testing, we’d have no cases.”

Trying to escape blame for the world’s highest toll of deaths and cases, Trump said last Saturday, “Slow down the testing.” He defied the White House statement that he was “joking” with the assurance, “I don’t kid” and the reiteration of his demand.

The Administration began to comply on Wednesday with plans to cut funding for 13 test centers, including in Texas.

Trump brushed away any concern:

Some Trump allies stood by him. Florida Gov. Ron DeSantis, feted by Trump in late April as the Governor said his state was vanquishing Coronavirus, said there would no limit on further lifting of restrictions.

“We never anticipated necessarily doing anything different in terms of the next phase at this point anyways,” he asserted. “We are where we are.”