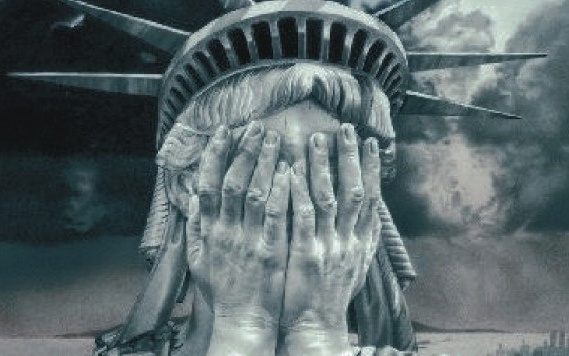 The US death toll from Coronavirus passes 100,000.

Donald Trump does not mention the victims. Nor does Vice President Mike Pence. The White House issues no statement.

About 14% of Americans say they know someone who has perished, less than three months after the first death was recorded.

The daily death toll is falling in the hardest-hit states. Last week New York recorded fewer than 100 deaths for the first time since March. However, in 24 states the number of cases is rising: in part because of quick lifting of restrictions, which have defied medical advice but followed the desire of Trump for “re-opening” of the US.

White House Press Secretary Kayleigh McEnany would not say on Tuesday how Trump would honor the victims. She portrayed their deaths as a victory because it was “far below 2.2 million”:

We never want to see a single individual lose their life, but that being said, to be under significantly that high mark shows that the president did everything in his power and helped to make this number as low as humanly possible.

A “senior Administration official” said there are no White House plans for an event acknowledging the loss. He said there are “preliminary discussions” of a commemoration when Coronavirus has passed, such as a big event at a major hospital with applause for first responders and medical staff.

There are moments in our history so grim, so heart-rending, that they're forever fixed in each of our hearts as shared grief. Today is one of those moments. 100,000 lives have now been lost to this virus.

To those hurting, I'm so sorry for your loss. The nation grieves with you. pic.twitter.com/SBBRKV4mPZ

Trump’s only indirect mention of the deaths came in a pair of tweets on Tuesday, as he tried to protect his reputation, rewrote recent history, and attacked House Speaker Nancy Pelosi.

….One person lost to this invisible virus is too much, it should have been stopped at its source, China, but I acted very quickly, and made the right decisions. Many of the current political complainers thought, at the time, that I was moving far to fast, like Crazy Nancy!

Trump also tried to cut down governors, both Republican and Democrat, who have been praised for their handling of the crisis in the absence of a coordinated Administration effort. He added the falsehood that the US, which only belatedly tested for the virus, now has “unlimited” capacity.

“We made most Governors look very good, even great, by getting them the Ventilators, unlimited Testing, and supplies, all of which they should have had in their own stockpiles,” he insisted.

Trump did not mention Coronavirus at all on Wednesday, apart from a proclamation that “We pass 15,000,000 Tests Today”. Instead, he began the day attacking social media platforms after Twitter finally took a first, limited step to check his disinformation, adding “Get the Facts” labels to a pair of Trump tweets falsely proclaiming that postal voting is linked to electoral fraud.

See EA on Radio FM4: Can Twitter Deal With Its Trump Problem?

Trump threatened to shut down Twitter, repeating his lie that “Mail-In Ballots…will lead to massive corruption and fraud” to set up a pretext to postpone November’s US elections.

“Arguably The Greatest President in History”

Throughout the day, Trump sneered at media outlets from The New York Times to The Atlantic and retweeted the unsupported conspiracy theory that Obama Administration officials tried to remove him from office.

He again mocked presumptive Democratic nominee Joe Biden for wearing a mask, in accordance with the guidance of White House medical officials, at a Memorial Day ceremony in a Delaware cemetery.

And he hailed himself as “arguably the greatest president in our history”.

Among his Twitter day, Trump traveled to Florida for the first manned space flight in almost a decade. But he was frustrated when the launch, a joint NASA project with Elon Musk’s SpaceX, was delayed to Saturday because of bad weather.

So he returned to his assault on social media companies and postal voting:

Big Tech is doing everything in their very considerable power to CENSOR in advance of the 2020 Election. If that happens, we no longer have our freedom. I will never let it happen! They tried hard in 2016, and lost. Now they are going absolutely CRAZY. Stay Tuned!!!

In the absence of any Trump mention of the 100,000, White House spokesman Judd Deere declared, “President Trump’s prayers for comfort and strength are with all of those grieving the loss of a loved one or friend as a result of this unprecedented plague, and his message to this great nation remains one of resilience, hope and optimism.”