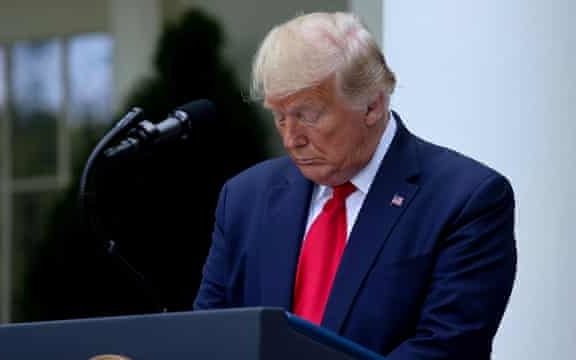 On Tuesday the platform added links for reliable information to the bottom of a pair of Trump tweets proclaiming, “There is NO WAY (ZERO!) that Mail-In Ballots will be anything less than substantially fraudulent.”

….living in the state, no matter who they are or how they got there, will get one. That will be followed up with professionals telling all of these people, many of whom have never even thought of voting before, how, and for whom, to vote. This will be a Rigged Election. No way!

The step was a tentative response after almost a decade of Trump disinformation, including claims that Barack Obama was born in Kenya and that climate change is a Chinese hoax, on the site. Last year, as Trump spread Islamophobic and racially-charged messages, Twitter said it would hide tweets of world leaders behind a warning label if their messages incited harassment or violence; however, it never acted.

For years, Trump has spread lies about fraud involving “millions” of illegally-cast votes. Before the 2016 Presidential election, he made the claims to cover a possible loss. Even after his Electoral College victory over Hillary Clinton, he pressed the falsehoods to challenge Clinton’s triumph by 3 million in the popular vote.

Soon after becoming President, Trump set up a commission led by his ally, Kansas politician Kris Kobach, to press the fraud accusations. However, the commission quickly collapsed as members resigned over its lack of organization and States refused to hand over data.

Recently Trump has stepped up an assault on postal voting, potentially as a pretext to delay November’s elections amid the Coronavirus pandemic.

Earlier this month Trump’s son-in-law Jared Kushner said, in an interview with Time magazine a postponement was possible. He later pulled back, saying his statement was not based on White House discussions.

Last week, Trump assailed Michigan and Nevada as well as California for their steps towards postal voting. However, he undermined his effort by falsely declaring that Michigan had posted ballots, rather than applications for ballots, to its residents. Michigan Secretary of State Jocelyn Benson knocked him back:

Hi again. Still wrong. Every Michigan registered voter has a right to vote by mail. I have the authority & responsibility to make sure that they know how to exercise this right – just like my GOP colleagues are doing in GA, IA, NE and WV. Also, again, my name is Jocelyn Benson. https://t.co/deZJwbMlT0

Twitter’s “Get the Facts” labels led to a CNN story about Trump’s unsupported claims and to bullet points dissecting the falsehoods.

Trump exploded later in the day, “Twitter is now interfering in the 2020 Presidential Election.” He added the threat, “Twitter is completely stifling FREE SPEECH, and I, as President, will not allow it to happen!”

The intervention was set up early Tuesday by Trump’s disinformation that MSNBC broadcaster Joe Scarborough might have committed a murder in 2001.

Lori Klausutis, a staffer for Scarborough when he was a US Congressman from Florida, collapsed and died in his offce from an undiagnosed heart condition. There has never been any evidence of foul play.

But Trump, angry at coverage of him by Scarborough’s program “Morning Joe”, has persisted in the false conspiracy theories on Twitter and on Facebook. On Tuesday, Klausutis’s widower Timothy asked Twitter chief executive Jack Dorsey to delete the “horrifying lies”.

As her husband, I feel that one of my marital obligations is to protect her memory as I would have protected her in life. There has been a constant barrage of falsehoods, half-truths, innuendo and conspiracy theories since the day she died….

The frequency, intensity, ugliness, and promulgation of these horrifying lies ever increases on the internet. These conspiracy theorists, including most recently the President of the United States, continue to spread their bile and misinformation on your platform disparaging the memory of my wife and our marriage….

My request is simple: Please delete these tweets

The platform replied to Klausutis in a brief note that it was “deeply sorry about the pain these statements” were causing the Klausutis family, but balked at removing the tweets: “We’ve been working to expand existing product features and policies so we can more effectively address things like this going forward, and we hope to have those changes in place shortly.”