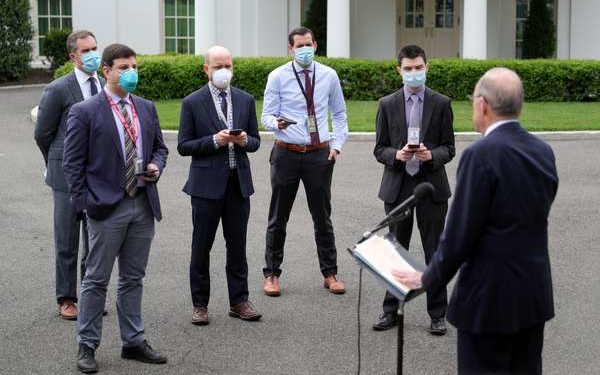 US unemployment soars to 14.7%, the highest level since the Great Depression, amid the Coronavirus crisis.

The Labor Department reportedly that 20.5 million people lost their jobs in April. Gains in employment since 2010 were wiped out in the month, with the downturn double that of the Great Recession from 2007 to 2009.

The unemployment rate was 3.5% in February.

More than 33 million people filed unemployment applications in the six weeks since mid-March. The previous weekly high was 685,000, in October 1982.

The Labor Department said unemployment rate would have been about 20% if personnel, absent from work for “other reasons”, were counted as unemployed or furloughed. The official rate also excludes millions of workers have left the labor force entirely, and 5 million who have moved from full time to part time work.

Further job losses are expected in coming weeks, with State and local governments facing billions of dollars in deficits and the Republican-led Senate blocking any significant Federal assistance.

The US death toll also continued to surge on Friday, reaching 77,179 with almost 1.3 million confirmed cases.

Donald Trump swept away the news in a Friday interview on his favored outlet Fox TV: “Those jobs will all be back, and they’ll be back very soon.”

The hospitality sector, lost 7.7 million jobs in April. Retail lost 2.1 million jobs, and manufacturing 1.3 million. Companies cut 2.1 million employees and state and local governments dismissed almost 1 million. In the midst of the pandemic, there were 1.4 million layoffs in the health sectors as people delayed put off dental care and minor surgeries.

But the White House halted talks with Congress over any further relief measures. Trump’s chief economic advisor Larry Kudlow said the Administration is waiting for information about limited lifting of stay-at-home orders in 24 US states.

Trump: Coronavirus “Will Go Away Without Vaccine”

Trump’s son-in-law Jared Kushner said last week, as he proclaimed a “great success story”: “I think you will see by June, a lot of the country should be back to normal, and the hope is that by July the country is really rocking again.”

But economists and financial specialists dismissed the claim as fantasy. “It’s not like turning a light switch and everything goes back to where it was in February,” said Loretta Mester, president of the Federal Reserve Bank of Cleveland. “We depopulated everything quickly. Repopulating it will take a lot longer.”

Trump tried another line on Friday: he said, at an event with Republican legislators, that Coronavirus “will go away without a vaccine….[Viruses] die too, like everything else.”

TRUMP: This is going to go away.

REPORTER: But what evidence have you seen that coronavirus will go away without a vaccine?

TRUMP: I just rely on what doctors say.

(No doctor that I'm aware of has said this will happen) pic.twitter.com/UC7qvDyypH

But even as Trump was offering his latest assurance, there was confirmation of two White House staff testing positive for the virus.

Katie Miller, Vice President Mike Pence’s Press Secretary, and a Trump valet are the latest cases within the Administration.

Trump told reporters that the lesson was about unnecessary testing for Coronavirus.

Trump: Katie, she tested very good for a long period of time and then all of the sudden today she tested positive… This is why the whole concept of tests aren’t necessarily great pic.twitter.com/iM9Xo3jddU

Pence’s flight to Iowa was held up for at least an hour, and some people — apparently having been in contact with Miller — disembarked from Air Force Two. The White House said Pence and aides who left the plane tested negative for the virus.

Miller is the wife of Trump’s senior White House advisor Stephen Miller, who has tried to use Coronavirus to further his anti-immigrant plans.

Pence press secretary Katie Miller is the only person in this photo without a mask. Today news broke that she has coronavirus. pic.twitter.com/5keMNtN6Fv