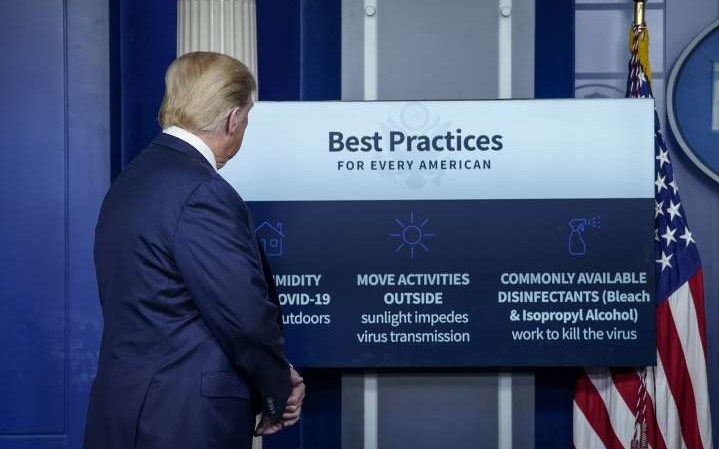 Donald Trump ignored more than a dozen classified intelligence briefings in January and February about the threat from Coronavirus.

“Current and former US officials” tell The Washington Post of Trump’s dismissal of the President’s Daily Brief, produced before dawn each day to draw attention to the most significant global developments and security threats.

But Trump routinely skipped reading the Brief and at times had no patience for an oral summary, according to the officials.

The revelation reinforces detailed accounts in The Post and The New York Times of how the US lost 70 days in preparation for the virus because of Trump’s initial denial of any problem, criticizing top officials as “alarmist”, and obstruction of Federal Government action.

Officials said the PDB’s attention to the growing threat was comparable to that from terrorism or overseas conflicts.

The US death toll is now 56,253 with 988,469 confirmed cases. An analysis of federal data indicates that there may have been unreported deaths in March and the first days of April.

President Trump rose to fight this crisis head-on by taking early, aggressive historic action to protect the health, wealth and well-being of the American people We will get through this difficult time and defeat this virus because of his decisive leadership.

A Department of National Intelligence official said, “The detail of this is not true,” without giving any explanation.

But The Post’s multiple sources said the PDB had comprehensive articles and smaller digest items to alert and update Trump and senior administration officials. One official said that, by mid- to late January, Coronavirus was prominent in the Brief.

He said in late February, after the initial outbreak in Washington State and as the virus was moving undetected in areas such as New York, “Within a couple of days, [it] is going to be down to close to zero…It’s like a miracle, it will disappear.”

Declaring that the virus was no worse than flu, he told the Conservative Political Action Conference: “The reason [the media] are paying so much attention to it today is that they think this is going to bring down the president.”

And on March 10, the day before the World Health Organization declared a global pandemic, Trump said, “Just stay calm. It will go away.”

Two days after declaring that he would no longer give White House briefings, Donald Trump suddenly changed his mind on Monday.

Trump’s announcement that he would no longer face “hostile questions” from “Lamestream Media” came after criticism of his comments that injection of disinfectant and ultraviolet treatment might cure Coronavirus.

On Monday the White House announced a briefing, then said it would not be held, and finally confirmed an appearance before journalists at 5:30 p.m.

However, while a White House document proclaimed “strategic direction and technical assistance”, the Administration took no responsibility for the initiative. Instead, States will continue to bear the burden of planning and rapid-response programs.

White House medical advisors say 500,000 tests are needed daily to consider lifting of stay-at-home measures and easing of social distancing. But testing plateaued at 150,000 tests per day, before finally passing 200,000 over the past week.

State governors say they are being hindered by shoratages of lab kits and chemical reagents.

The White House document did not directly address the issues, but said it would “align laboratory testing supplies and capacity with existing and anticipated laboratory needs”.

In a further shifting of responsibility to States, the White House said the Federal Government is the “supplier of last resort”. 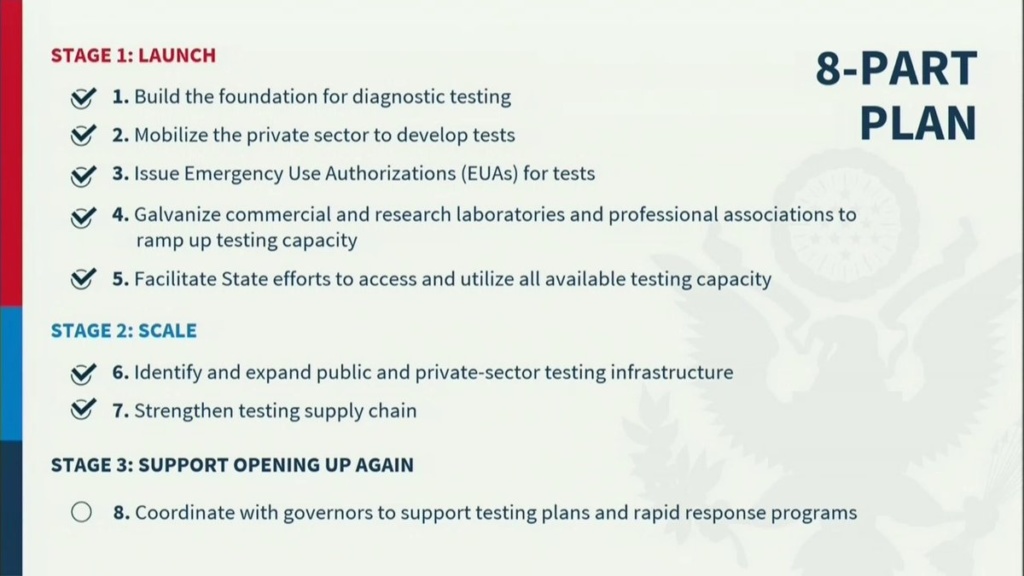 The retail CEOs said they are increasing the rate of testing and the production of medical supplies. The Administration official who oversees testing proclaimed that there will be at least 8 million per month — still less than half the required number, according to the medical advisors — by the end of May.

In March, Trump announced a public-private initiative for scores of testing sites, but few have been established.

At yesterday’s briefing, Vice President Mike Pence altered his promise of 4 million tests, made seven weeks ago, saying they only referred to those sent out and not completed.

Trump rambled as he tried to shift any blame for shortcomings to State governors:

Now there are big believers in testing, and then there are some governors that don’t feel as strongly about it at all, you understand, that they feel much differently about it, but we’re going with maximum testing because it’s something we’re very capable of doing but will be much more than doubled.

“Perhaps most pathetically, it attempts to shirk obviously federal responsibilities by assigning them solely to states instead.

.@Olivianuzzi : If a POTUS loses more Americans over six weeks than died in the Vietnam War, does he deserve to be reelected?