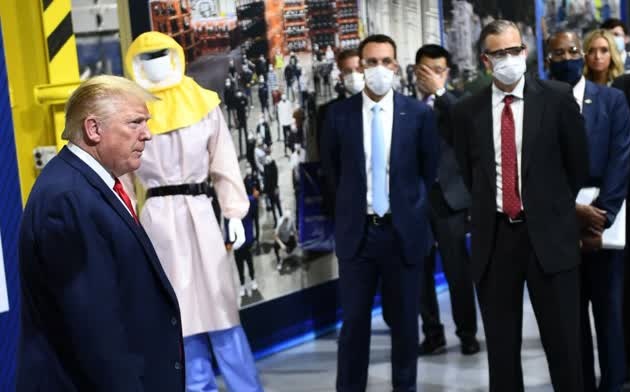 Defying a state order to contain Coronavirus, Donald Trump appears without a mask at a Ford automobile plant, Ypsilanti, Michigan, May 21, 2020

Donald Trump steps up his preparations to delay November’s US elections, launching a series of unproven allegations about postal voting.

The Coronavirus pandemic, which has now claimed almost 95,000 US lives, is raising questions about standard arrangements over in-person voting in polling stations. After a court backed Wisconsin’s legislature and ordered in-person voting in the state’s elections last month, cases of the virus spiked.

For years, Trump has made false assertions about voter fraud. In 2016, he spread them initially to guard against a possible loss in a “rigged election” to Hillary Clinton. When he won the White House with an Electoral College majority, Trump continued the claims to belittle Clinton’s triumph in the popular vote.

Trump has stepped up the attack on postal voting in the past month. Last week his son-in-law Jared Kushner said there was uncertainty about whether November’s elections would proceed. (After criticism of the remark, made to Time magazine, Kushner said he was unaware of and not involved in any “discussions” about changing the date.)

Only Congress can change election arrangements, established in a bill from 1845.

On Wednesday, Trump launched a Twitter assault on Michigan’s Secretary of State Jocelyn Benson, who has authorized the despatch of absentee ballot applications to the state’s voters.

He falsely said that Benson had sent ballots, not applications, before deleting and rewriting the tweet. He added the threat — immediately labelled unconstitutional by experts — to hold up Federal funding to Michigan, which has suffered damaging floods in the past week.

Trump also took aim at Nevada, which has a Republican Secretary of State, for “illegal vote by mail ballots” and repeated his threat to withhold funds.

Benson pushed back, correcting Trump’s initial false claim and then responding to his revised tweet:

Hi again. Still wrong. Every Michigan registered voter has a right to vote by mail. I have the authority & responsibility to make sure that they know how to exercise this right – just like my GOP colleagues are doing in GA, IA, NE and WV. Also, again, my name is Jocelyn Benson. https://t.co/deZJwbMlT0

Yesterday Trump carried out a photo opportunity at an automobile plant in Michigan which is now making ventilators and masks. He spent several minutes making false and unsupported assertions about mail-in voter fraud.

Who knows who’s signing it? Who knows it gets to your house? Who knows if they don’t pirate?Obviously there’s going to be fraud. We’re not babies.

However, he did not repeat his funding threat.

Michigan was a critical swing state in Trump’s 2016 victory. He is trailing presumptive 2020 Democratic nominee Joe Biden in polling in the state.

Michigan has the fourth-highest Coronavirus death toll in the US, with 5,129 victims. Its official unemployment rate is 22%.

For months, Trump has carried out a campaign of insults against Governor Gretchen Whitmer, seen as a possible Vice Presidential candidate. As Whitmer has gained praised for her handling of the Coronavirus case, in contrast to criticism of Trump’s mismanagement, he has stepped up his attacks and endorsed illegal, armed protests against stay-at-home and social distancing measures.

Before leaving Washington for Michigan, Trump — who has registered to vote in Florida, where he has his Mar-a-Lago resort — indicated that only people like himself should have postal ballots.

We don’t want anyone to do mail-in ballots. Now, if someone has to mail it in because they’re sick or by the way because they live in the White House and they have to vote on Florida, and they won’t be in Florida and there’s a reasoning for it, that’s OK.

But even as he spoke, an investigation in Florida took apart his claims of fraud. The state’s law enforcement agency said it found no widespread voter fraud in the 2018 races for Senate and Governor.

Trump has repeatedly proclaimed theft of votes in counties where Democrats did well, such as Broward and Palm Beach.

A White House spokesperson referred questions about the Florida findings to Trump campaign. A campaign spokesperson for the campaign did not respond to a request for comment.

But for the group in Michigan awaiting Trump’s arrival, the facts got in the way of the narrative of “fraud”.

“I lived in Chicago for six years. We know how Mayor Daley stuffed the ballot box for JFK against Nixon.

That’s what the Democrats in charge here want to do, with this mail-in voting. There’s just no way to have accountability for those ballots like you do when people come to the voting booth.

Matthew Shepard, retired from the military, claimed, “In Wayne County alone, more than a million people who weren’t registered to vote in 2018 got to vote anyway, and that’s how Whitmer and these Democrats got elected. That’s the only way Trump loses this election — this mail voting scam.”

The unsupported allegations were encouraged and amplified by Deborah Fuqua-Frey, a board member of the Washtenaw County Republicans. She maintained that the United Auto Workers union “controls the outcome of the 2020 election…because nobody knows how to stuff the ballot box like the UAW”.