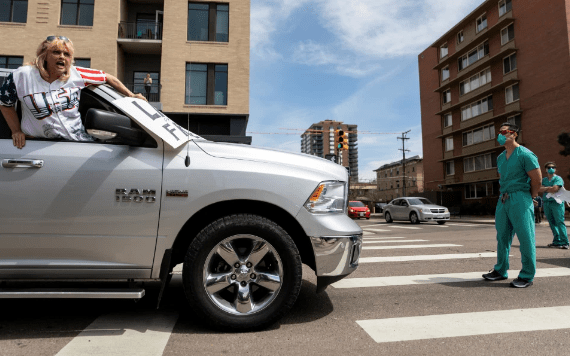 Nurses stand in front of a protester demanding an end to Coronavirus stay-at-home orders in Colorado, April 19, 2020

State Governors maintain measures to save lives in the Coronavirus pandemic, as Donald Trump says they “went too far” and backs illegal protests to lift stay-at-home orders.

The US toll rose to 40,683 on Sunday, an increase of 1,600 in 24 hours. However, some of the hardest-hit states are reporting a decline in the rate of deaths and hospitalizations, as the orders begin to show an effect on the spread of the virus.

Gov. Gretchen Whitmer of Michigan, which has the third-highest death toll, summarized on Sunday:

My stay-home order is one of the nation’s more conservative but the fact of the matter is it’s working. We are seeing the curve start to flatten and that means we’re saving lives.

Michigan is one of the locations of protests, spurred by conservative and far-right groups on Facebook, against the stay-at-home orders in 42 of 50 US states.

Trump, in his ongoing hostility to governors such as Whitmer and his desire to “re-open” the US by May 1, endorsed the illegal gatherings on Friday with a series of “LIBERATE” tweets.

In an ill-tempered White House briefing on Sunday, he insisted, “You’re allowed to protest….Some governors have gone too far.” The protesters, he said, were “great people”.

But it was the frontline governors who made the case on Sunday for continued efforts to save lives, as well as highlighting Trump’s counter-productive language and actions.

Gov. Andrew Cuomo of New York, with the nation’s highest death toll at 18,298, noted that hospitalizations have dropped for the sixth consecutive day: Intensive care admissions and intubations are also decreasing.

At this point we are on a descent. Whether or not that descent continues depends on what we do….

Gov. John Bel Edwards of Louisiana, which has suffered 1,296 deaths, assessed, “We’re in much, much better place today than we thought we were going to be.” He noted that fewer patients are now on ventilators.

Edwards echoed Cuomo’s words on preparedness and the stay-at-home orders:

As always, I want to remind everyone that it’s going to take all of us working together and for some period of time to defeat this virus, get back to life as normal. We’re not going to see that for a while and I suspect we won’t fully see it until after there’s a vaccine that’s administered to the entire population.

Meanwhile, other State and local leaders chided Trump’s continued efforts to undermine the orders and the Administration’s failure to coordinate vital operations.

Gov. Jay Inslee of Washington State, the initial center of the outbreak, repeated his criticism that Trump is inciting “domestic rebellion”.

"It is dangerous because it can inspire people to ignore things that actually can saves their lives." Via ABC pic.twitter.com/swiKiHVJ68

Gov. Ralph Northam of Virginia noted the lack of comprehensive testing, vital to any containment of the virus and lifting of lockdowns.

White House advisors say 500,000 daily tests are needed, but the current level has plateaued at 150,000 amid shortages of kits and chemical reagents in many parts of the US.

Northam summarized that claims by Trump and Vice-President Mike Pence that states have plenty of tests were “just delusional”.

We have been fighting for testing. We don’t even have enough swabs, believe it or not. For the national level to say that we have what we need, and really to have no guidance to the state levels, is just irresponsible, because we’re not there yet.

The administration I think is trying to ramp up testing, they are doing some things with respect to private labs. But to try to push this off, to say the governors have plenty of testing and they should just get to work on testing, somehow we aren’t doing our jobs, is just absolutely false.

Another Republican governor, Mike DeWine of Ohio, said the Food and Drug Administration had not given enough attention to companies “putting a slightly different formula together” for tests.

With that option, “I could probably double, maybe even triple testing in Ohio virtually overnight,” DeWine said.

Trump, who has been President since January 2017, blamed previous Administrations during Sunday’s briefing: “I told you we inherited a lot of garbage, we took, they had tests that were no good, they had all this stuff was no good.”

At the White House briefing, Trump opened by repeating his declaration of 4.18 million Americans tested: “That’s a record anywhere in the world.”

Once again, he failed to note that the US is 18th in the world on a per capita basis.

Instead, he tried to shift blame to the governors. Holding a medical swab, he declared, “We have ordered a lot of them” but some states “don’t know where they are”.

Trump then proclaimed, “We are now the king of ventilators. We have so many ventilators.” He did not comment on the problem throughout the crisis of organizing delivery of ventilators to states in need, leaving Governors to fight for supplies as prices spiralled.

He then played a video with edited remarks from New York Gov. Cuomo apparently giving praise to the Federal Government “working with states” as “a phenomenal accomplishment”.

When the clip was finished, Trump complained that it wasn’t long enough: “Do you want to put the rest of it up or do you not have it?” About 30 minutes later, a longer version was played.

Trump did not give the context for the edited video, and he did not note that on Friday, Cuomo had said over the issues of medical supplies and testing:

If he’s sitting home watching TV, maybe he should get up and go to work, right. Second, let’s keep emotion and politics out of this and personal ego if we can because this is about the people and our job and let’s try to focus on that….

I know it’s too complicated and too hard. That’s why we need help. I can’t do an international supply chain.

Cuomo responded to Trump’s show with a quote from the late Sen. Daniel Patrick Moynihan, “Everyone is entitled to his own opinion, but not his own facts.” The Governor then directed praise to the real “heroes”:

Thank you to the 1.1 million frontline healthcare workers.

Our gratitude is boundless.

You are heroes. #NewYorkTough

Meanwhile, Trump was pressed at the briefing by CNN’s Jeremy Diamond on whether, “Is this really the time for self-congratulations?” amid more than 40,000 deaths and 22 million Americans losing jobs.

You’re CNN. You’re fake news, and let me just tell you, they were excoriated by people like you that don’t know any better because you don’t have the brains you were born with. You should be praising the people that have done a good job, not doing what you do, even that question….

Nothing’s about me. Look, you’re never going to treat me fairly, many of you, and I understand that. I don’t even know, I got here with the worst, most unfair press treatment they say in the history of the United States for a President.

"Oh, more than [40,000] … good … you just don't have the sense to understand what's going on" — a sarcastic Trump isn't happy with @JDiamond1 after he corrects his incorrect statements about the number of Americans who have died from coronavirus pic.twitter.com/qsoe6yroUL