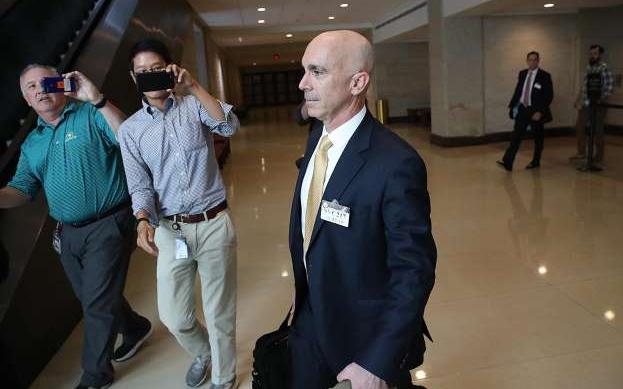 Linick (pictured) was dismissed late Friday night. He was reportedly looking into retribution against Department staff.

His replacement is Ambassador Stephen Akard, an ally of Vice President Mike Pence.

House Speaker Nancy Pelosi warned of an “acceleration in a dangerous pattern of retaliation”, saying Linick was “punished for honorably performing his duty to protect the Constitution and our national security, as required by the law and by his oath”.

Inspectors general are inconvenient, pesky brutes if your goal is turn the government into a cash cow for your friends, cronies and family. They must be eliminated for the scheme to endure.

The State Department and White House did not respond to requests for an explanation of the firing.

Trump and his inner circle have undermined and dismissed inspector generals seen as a threat to their position. For months, Trump assailed the intelligence community’s Inspector General Michael Atkinson, over the assessment that a formal complaint about the Trump-Ukraine affair was justified.

After Trump was impeached but protected from conviction by the Republican-led Senate, he removed Atkinson in early April.

In early April, Glenn Fine, the acting inspector general for the Defense Department, was dismissed. He was about to became chairman of a new Pandemic Response Accountability Committee overseeing the distribution of Coronavirus relief funds.

A Democratic congressional aide said Linick was investigating Pompeo’s “misuse of a political appointee at the Department to perform personal tasks for himself and Mrs. Pompeo”.

Last August, the inspector general concluded that official in a prominent department bureau had mistreated and harassed staffers, accusing them of political disloyalty to the Trump Administration and retaliating against them.

At this point, the President's paralyzing fear of any oversight is undeniable. https://t.co/6qV55sRDlo

Linick was highly regarded within the State Department.

His replacement Akard was the director of the Office of Foreign Missions. Perhaps more importantly, Akard was a foreign policy advisor to Indiana Governor Mike Pence, later becoming chief of staff for the Indiana Economic Development Corporation.

In 2017, he was nominated as director general of the Foreign Service. The move was questioned by veteran US diplomats, who said Akard lacked the long tenure of service required for the high-profile human resources position. The American Academy of Diplomacy wrote a letter opposing his nomination.

Akard’s nomination as eventually withdrawn, and he was placed into Foreign Missions in September 2019.