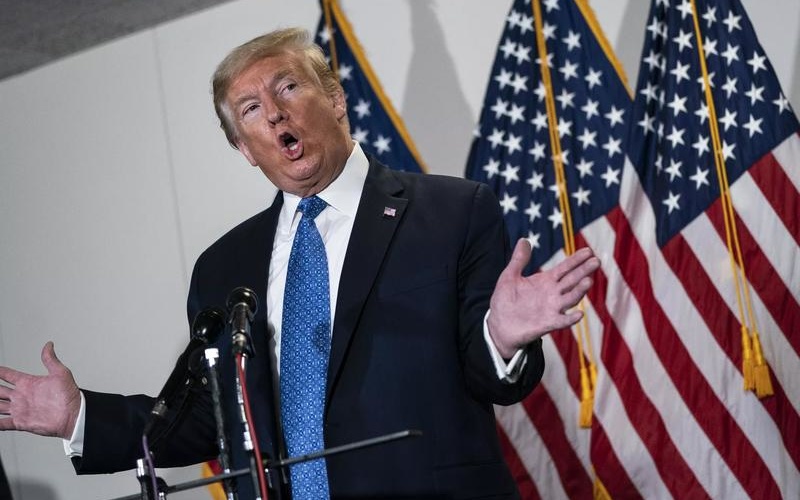 Rocked by criticism of his promotion of an untested, potentially dangerous drug to treat Coronavirus, Donald Trump says a detailed medical study of hydroxylchloroquine is a “Trump enemy statement”.

Trump lashed out on Tuesday, misrepresenting a study of 255 patients by the Veterans Administration: “If you look at the one survey, the only bad survey, they were giving it to people that were in very bad shape. They were very old. Almost dead. It was a Trump enemy statement.”

"It was a Trump enemy statement" — Trump dismisses doctors who have warned about possible bad consequences of hydroxychloroquine and insists he knows better pic.twitter.com/CiyTtOBJlu

On Monday, Trump tried to divert headlines of more than 90,000 US deaths from Coronavirus by declaring that he was taking hydroxylchloroquine, the anti-malarial drug he has promoted since mid-March as a cure.

But the stunt backfired as experts, including the head of the American Medical Association, summarized that there is no evidence of the drug’s effectiveness. They noted studies which have found dangerous, potentially fatal side effects such as interrupted heart rate. they warned that hydroxylchloroquine is being diverted from the uses for which it is approved, such as treatment of lupus and rheumatoid arthritis.

The VA study, the largest of its kind, found that 97 patients given hydroxychloroquine had a 27.8% death rate, while the 158 patients who did not take the drug had an 11.4% death rate. The National Institutes of Health posted the findings on its website last month.

However, Trump — who has also suggested the ingestion of disinfectant and ultraviolet treatment as potential cures for the virus — insisted:

"That was a false study done. Where they gave it very sick people. Extremely sick people. People that were ready to die. It was given by obviously not friends of the administration" — Trump defends hydroxychloroquine by suggesting a study of VA patients was fruit of a conspiracy pic.twitter.com/a3neqa2U4y

Last week the National Institute of Allergy and Infectious Diseases, led by Dr. Anthony Fauci, announced a 2,000-patient study hydroxychloroquine combined with the antibiotic azithromycin. There are more than 50 other clinical trials involving hydroxychloroquine in the US.

But Trump saw the figures as a “badge of honor”.

"So when we have a lot of cases I don't look at that as a bad thing. I look at that, in a certain respect, as being a good thing because it means our testing is much better…I view it as a badge of honor." – Trump, on the U.S. having more coronavirus cases than any other country pic.twitter.com/McT88ioyOp

Other Administration officials carefully walked a tightrope of not disputing Trump, while not endorsing his ingestion of hydroxychloroquine.

Vice President Mike Pence told Fox TV that he was not taking the drug because his doctor had not recommended it.

However, he declared that he “wouldn’t hesitate” to use hydroxychloroquine if it was prescribed.

On Monday night, Trump’s doctor Sean Conley covered his client by writing, “After numerous discussions he and I had regarding the evidence for and against the use of hydroxychloroquine, we concluded the potential benefit from treatment outweighed the relative risks.”

But Trump continued to struggle, even with supporters. Fox TV’s Neil Cavuto maintained his pushback:

Fox News's Neil Cavuto still isn't having Trump's promotion of hydroxychloroquine: "The issue here is whether it's advisable to take to ward off Covid. No less than the FDA warned back on April 24 that hydroxychloroquine & chloroquine have not been shown to be safe & effective." pic.twitter.com/qX51B5m8Ct

Cavuto was assailed by Trump and attacked on social media when he told viewers on Monday not to follow Trump’s lead: “It will kill you.”

Other Trump loyalists on Fox TV, including Tucker Carlson, Laura Ingraham, and Trump’s friend Sean Hannity, continued to endorse the consumption of hydroxylchloroquine.